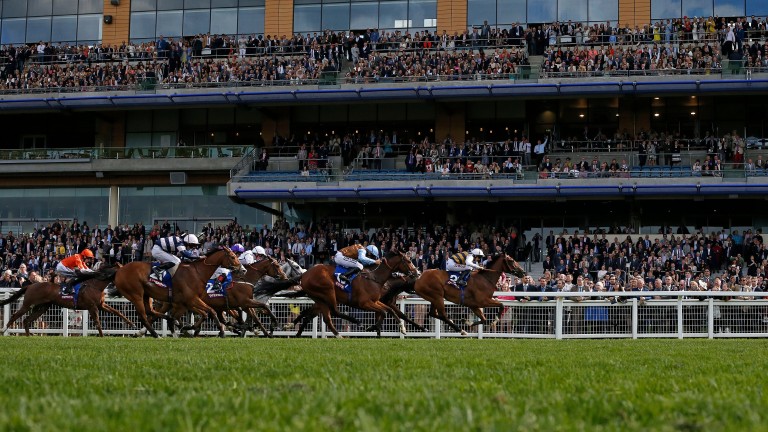 The Victoria Cup is always a competitive affair
Alan Crowhurst
1 of 1
By Richard Birch UPDATED 9:21AM, MAY 11 2019

Not only is Ryan Moore renowned for being arguably the world's best rider, it's common knowledge that he provides outstanding feedback.

After getting off Green Power at Newmarket last month, he suggested to trainer John Gallagher that the four-year-old sprinter would be worth a try at 7f.

Gallagher said: "The form of that Newmarket race has worked out very well. After the Shergar Cup last year I thought he'd be okay for seven furlongs and Ryan suggested we try it when he got off him last time – the horse galloped all the way to the line.

"I'm not sure whether stall one is good or not but we'll drop him in and see. He likes dig in the ground. If he gets the trip he won't be far away."

Cape Byron, a regular in big-field Ascot handicaps last season, makes his seasonal reappearance under Andrea Atzeni on the back of some favourable reports from Newmarket work-watchers.

The son of Shamardal once again locks horns with the winner of this race 12 months ago, Ripp Orf, who beat him by half a length in a 7f handicap over course and distance last September.

Cape Byron remains relatively unexposed for a five-year-old with just 11 runs under his belt and his trainer Roger Varian's patient policy with him could well pay handsome dividends this campaign.

Varian said: "Cape Byron is in great form and this has been his early-season target for some time.

The soft ground is a possible issue, but few of the 26 runners come into this cavalry charge in such good form as Kimifive, who sluiced in at Goodwood last Saturday.

It was hard not to be impressed with the manner in which Kimifive quickened inside the final furlong to catch long-time leader Love Dreams, who had travelled strongly halfway up the straight, on only his second start at 7f.

Trainer Joe Tuite said: "He did it very nicely and the step up to seven furlongs brought about improvement.

"He's bounced out of that race at Goodwood but I just wish it hadn't rained so much – his best form is on quicker ground.

"This race has always been his early-season target. He did nothing wrong last year – I thought he was very unlucky at the Newmarket July meeting and in the big final at Windsor.

"He's a lovely horse to have and should give us plenty more fun this season."

George Scott, trainer of Comin' Through
He's an interesting horse and has settled in well. I think he's been crying out for a break. This is a fact-finding mission but he'll love the ground and stays the trip very well. He could be a Royal Hunt Cup horse.

Andrew Balding, trainer of Straight Right
He's run some good races on the all-weather and this seven furlongs on turf should suit him well. He's a classy horse and should run well.

Richard Fahey, trainer of Zap and Gallipoli
I felt Zap should have won the International over course and distance last season. He was a little disappointing on his reappearance at Newmarket but don't draw a line through him. Gallipoli came out of his race at Newcastle very well so we're taking a chance. I think he saves a bit for himself, but on a real going day it wouldn't be a shock if he ran a big race.

Richard Hannon, trainer of Qaysar
I think he found a mile on fast ground at Nottingham against him last time so he'll be much happier on better ground back down to seven. We've always liked him and, while you can never be confident in a race like this, there will be plenty of pace on which will suit. He's definitely overpriced at 25-1.

Nigel Tinkler, trainer of Kaeso
The horse is very well in himself and will love the soft ground. He has a great each-way chance.

FIRST PUBLISHED 6:00PM, MAY 10 2019
There will be plenty of pace on which will suit Qaysar and he's definitely overpriced at 25-1