Expectations sky high for a Classic favourite earmarked for greatness 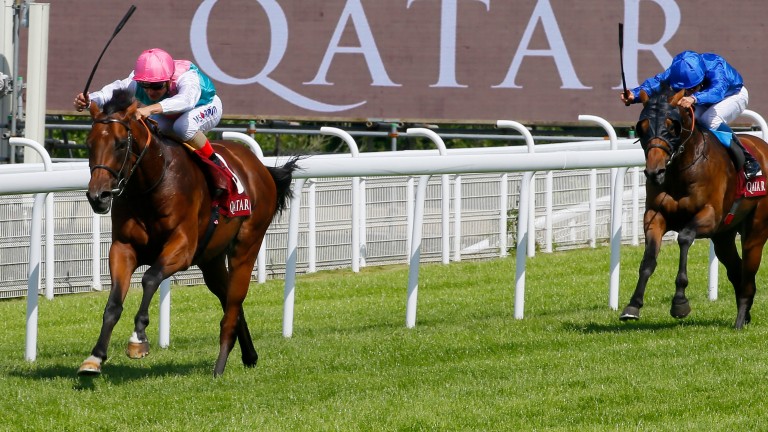 While the shirts of England’s footballers seem to weigh heavy when it matters, Khalid Abdullah's silks appear to have the reverse effect.

From Rainbow Quest and Dancing Brave to Workforce, Frankel and Enable, a pink sash on green body, white sleeves and a pink cap seems wedded to class, power and brilliance.

The colours have taken on an almost supernatural quality and in Saturday's Darley Dewhurst Stakes at Newmarket they will be sported by the rider on the latest one earmarked for greatness, Expert Eye.

Since winning the Vintage Stakes at Glorious Goodwood, the son of Acclamation has been favourite for the 2,000 Guineas, a race that three of the last seven winners of the Dewhurst have gone on to win: Frankel, Dawn Approach and Churchill.

The silks may have played a part but there was something special that twitched the antennae at Goodwood when Expert Eye went easily to the front before accelerating away to win as he pleased for jockey Andrea Atzeni and trainer Sir Michael Stoute.

The form book has only underscored the impression. The fourth, James Garfield, won the Mill Reef while the fifth, Seahenge, who re-opposes, took the Champagne Stakes.

A small setback has since kept Expert Eye off the track until now but that will not be offered as an excuse should he fail to win a Group 1 robbed of depth by the absence of National Stakes winner Verbal Dexterity.

Ryan Moore partners Seahenge's Aidan O’Brien-trained stablemate US Navy Flag, who showed much-improved form to win the Middle Park a fortnight ago, when Seamie Heffernan was on board.

The layers consider Emaraaty the bigger threat, a rearguard action not based around the substance of his Newbury novice stakes win, albeit impressive, but the identity of his trainer, John Gosden.

From Russia with love

The 100th anniversary of the Russian revolution is looming but traces of the nation’s old rulers remain, including at Newmarket.

The Cesarewitch, named in honour of Tsar Alexander II after he donated £300 to the Jockey Club, was probably not high on the to-do list of Lenin and his mates but it is for an army of hopefuls lining up in the 34-runner handicap that provides a gloriously vivid contrast to the Dewhurst.

The runners start in one county and finish in the next but where they spring out of the stalls in Cambridgeshire still has a telling influence on who crosses the line first in Suffolk.

Of the 17 winners this century 13 have been drawn in stall 18 or lower, a statistic to please backers of ante-post favourite John Constable, who emerges from stall seven, but not Withhold, gifted 24.

John Constable has not run on the Flat for 1,147 days but that absence does not count for too much in a race where experience of hurdles is often a plus.

Evan Williams’ hope has plenty of that, winning Market Rasen’s big summer handicap hurdle on his last start, and so does Lagostovegas, last seen scoring under Ruby Walsh at Listowel and on Saturday the mount of Ryan Moore, who has won on five of his 16 British rides for trainer Willie Mullins.

Another with strong hurdles form is Who Dares Wins, trained by the 2015 winner of the race, Alan King, and surely the choice of Lenin if he was still about.

One for the small guns

At York second-season trainer Owen Burrows sends his exciting juvenile Shabaaby in search of a hat-trick in the Rockingham Stakes. But the highlight of three races from the Knavesmire on ITV is arguably the Coral Sprint Trophy, where the fancied Spring Loaded is tasked with following up his emphatic win in last month’s Portland Handicap.

Just as captivating as the ease of his three-and-a-half-length success at Doncaster were the emotional scenes afterwards as Sue D’Arcy, wife and assistant trainer to Paul, shed tears of happiness in an embrace with her husband over a win that meant plenty to the small Newmarket yard.

Success is not always measured in Group 1s.

Years ago Chepstow’s first big jumps meeting of the season was shown on BBC. It’s about time it was back on terrestrial television.

Saturday’s card offers £143,000 in prize-money and is blessed by one who could be great in Finian’s Oscar.

Winner of the Grade 1 Mersey Novices’ Hurdle at Aintree in April and denied by a short head in the same class at Punchestown, the Colin Tizzard-trained five-year-old makes his chasing debut in a Listed race won by stablemate Cue Card six years ago.

It is a significant day for Finian’s Oscar but also the man on board, Bryan Cooper, who gets the chance to make a mark in the week he was named retained rider in Britain for Alan Potts, an owner whose silks are making a big impact of their own.

FIRST PUBLISHED 5:13PM, OCT 13 2017
The silks may have played a part but there was something special that twitched the antennae at Goodwood

Ryan Moore: 'I try not to offend anyone but for me it's always about the horses' Trainers' title race blown wide open - and we might just have a fairytale winner Goodwood ace King still just as adept over the jumps as Caramelised comes good 'We love you Hollie' screamed a racegoer - and Goodwood Cup day needed her First Group 1 for Alan King as Trueshan relishes conditions in Goodwood Cup 'She's very much the matriarch' - You'resothrilling a true blue hen for Coolmore