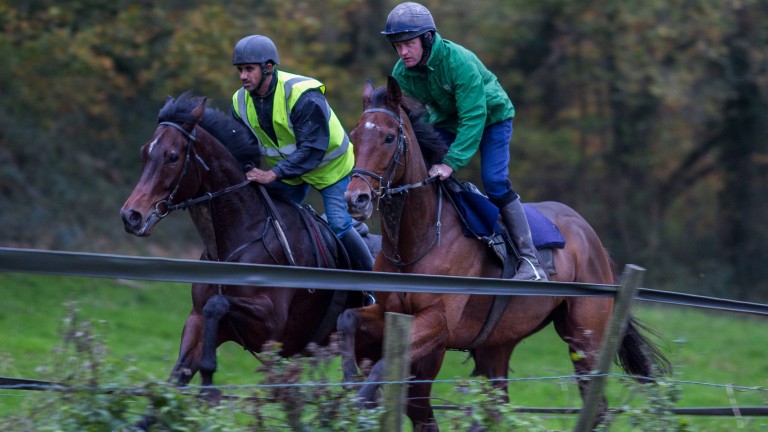 Sartorial Elegance (far side) in action on the gallops with his illustrious stable companion Cue Card
Julian Herbert
1 of 1
By Graham Dench 7:39PM, JAN 1 2017

The Colin Tizzard team have been carrying all before them lately and Sartorial Elegance has an obvious chance of providing them with a second National winner just six days after Native River won the Welsh version at Chepstow.

The six-year-old has taken a 15lb hike up the handicap for his easy defeat of Tothemoonandback here last month, but that came on just his third start over fences and he has plenty of scope for improvement. He is bred to improve again over this longer trip, and his opponents are largely exposed, although Tothemoonandback should not be underestimated on these revised terms.

Dawson City remains a novice over fences after eight attempts, but this race looks made for him, just as it did 12 months ago when the meeting was abandoned at the halfway stage owing to atrocious conditions and the big race postponed until the end of March.

He has not enjoyed much luck and last time was brought down in the Wincanton chase in which there were no finishers, but he stays well and enjoys soft ground.

Conditions are unlikely to be as testing as they often are, but this is a gruelling affair at the best of times and there have been five or fewer finishers in four of the last five runnings.

Gary Moore usually saddles a strong representative here and Tothemoonandback will be bidding to give the stable a third success in the last five years following the wins of Well Refreshed and Reblis.

David Pipe, trainer of Top Wood
He's a bit in-and-out and hard to predict, but on a going day he would have a chance, even with top weight.

Michael Scudamore, trainer of Mysteree
He has stamina in abundance and handles soft ground. It was a good reappearance at Haydock and you would hope he'd come on a little bit for that, in which case he'd have a good chance

Joe Tizzard, assistant to his father Colin, trainer of Sartorial Elegance
He's gone up 15lb for winning what was an ordinary race here, but he did it really nicely and certainly looks like a horse heading in the right direction. It's another step up but he looks like one of the few improvers in the race and the earlier Fontwell run has turned out strong form. Track and trip suit and he's got an obvious chance.

Polly Gundry, trainer of Dawson City
We fancied him 12 months ago when the race was abandoned. It's the right ground and the right trip and we've got Wayne Hutchinson, who rides for the owners and should be great on him. He's got lots going for him but he hasn't been lucky. I'll be delighted if the rain comes and it goes sloppy soft.

Charlie Longsdon, trainer of Azure Fly
He's in a bit of a rut and keeps finishing second, but there's no reason he can't get out of it. The trip should suit and he'd have to have an each-way chance.

Chris Gordon, trainer of Carloswayback
I was pleased with his third at Lingfield and he went on to win very well at Wincanton. He should stay the trip and enjoy the ground, so I'm hopeful, but he's up 10lb and if you look back through his record he's seldom run two races alike.

Oliver Sherwood, trainer of Beforeall
He's been a bit disappointing and has had various little issues, but he's been out hunting a few times and is in great order at home. He'll love the trip and the softer the better. He'd have an each-way squeak.

Emma Lavelle, trainer of Onderun
He's had all sort of niggly issues but seems to be getting his act together now and is a lot more straightforward. I was delighted with his win at Lingfield and, although this is another step up, the trip shouldn't be an issue and the rain is a positive.

Gary Moore, trainer of Tothemoonandback
He's got a lovely racing weight and I'm very happy with him. He ran well enough at Plumpton on only his second run back from a long layoff and wouldn't be out of it. The only negative would be the ground as he wouldn't want it too soft.

FIRST PUBLISHED 6:00PM, JAN 1 2017
It's another step up but he looks like one of the few improvers in the race