Saphir camp optimistic he can deliver the goods at Newbury 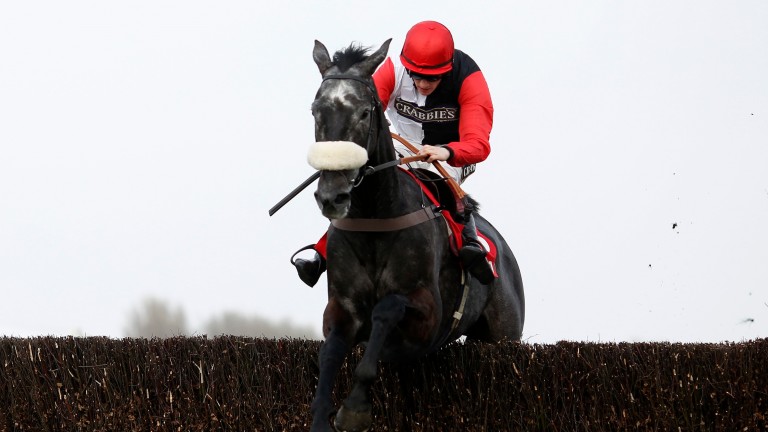 The time for Saphir Du Rheu to stop being a talking horse and deliver is upon us, his champion trainer Paul Nicholls said on Wednesday as he put the finishing touches to the grey's preparation for the Hennessy Gold Cup on Saturday.

Newbury's annual highlight, which boasts prize-money of £200,000, is one of the most prestigious chases in the calendar and it has become close to Nicholls' heart.

He enjoyed two of his finest moments in the saddle when Broadheath and Playschool struck in 1986 and 1987, while Strong Flow and Denman (twice) have provided memorable victories as a trainer.

Victory for Saphir Du Rheu – a horse he has never hidden his admiration for – would likely rank alongside those triumphs.

Owned by the Stewart family, the seven-year-old was all the rage for the Hennessy 12 months ago when favourite and topweight, but he could manage only fifth behind Smad Place, beaten 22 lengths.

He has, in Nicholls' words, been disappointing since, but shoots of recovery were formed at Ascot last month with a creditable third in the Sodexo Gold Cup.

"He needed the run and we're happy now," Nicholls said of his 9-1 chance. "He's 10lb lower than he was last year, which is a big help. Top weight for a second-season novice was a lot last year, so 10lb lower is much better.

"Over the last ten months he has been on the disappointing side, but there were signs of him running really nicely the other day and if he runs to his best he's got a chance. I'm not being over-bullish, though.

"He's been a bit of a talking horse and he's got to deliver. I'm pleased with him and he's got a chance, simply by the fact he's 10lb lighter and he ran well the other day. It's a competitive race and everything's got to go right for him."

Nick Scholfield, who schooled Saphir Du Rheu over some mini-fences at Nicholls' Ditcheat yard yesterday morning, will again be on board on Saturday.

He said: "You need a touch of class to win a Hennessy – look at the winners of it who have all got classy form – and he was second in a World Hurdle and won a Grade 1 novice chase at Aintree; he's achieved a lot and I think he's got that touch of class you need.

"He seems to run on most ground so whatever it turns out to be won't be a hindrance to him. Hopefully we can get him into a good rhythm and a nice position early and take it from there. He's got a lot going for him and there are more positives than negatives.

"It was a very pleasing run at Ascot. We were giving a lot of weight away to the winner on quickish ground, so I'm very much looking forward to Saturday.

"It's obviously going to help in a big handicap to be around the 11st mark and I schooled him this morning over a few mini fences. He seems in real good order with himself. I've had a few rides in the Hennessy on Taranis and My Will and it's a race I'd love on my CV."

Saphir Du Rheu is not the only arrow Nicholls could fire at the Hennessy with Vicente also a possibility, but Virak will head to Newcastle for the At The Races Rehearsal Handicap Chase on Saturday.

"If we run Vicente, he's not without a chance," the trainer added.

"He's a Scottish National winner, who loves a competitive race and flat track. There are lots of pluses for him. He's a really big price for a horse who goes well fresh, but we haven't decided which route to go down and, depending on ground, he could go to Aintree next week."

Vicente is a 25-1 shot, while Vyta Du Roc, the general 7-1 second-favourite to provide trainer Nicky Henderson with a fourth Hennessy victory, will be ridden by Tom O'Brien as his regular partner Daryl Jacob will be on duty at Newcastle.

It is looking increasingly likely there will be no Irish-trained chaser in this year’s renewal.

Ante-post favourite Avant Tout was sadly ruled out of the race last month after suffering a fatal injury in his prep run at Naas.

Gigginstown House Stud are responsible for the remaining Irish centries – Wounded Warrior, Outlander and Empire Of Dirt – but racing manager Eddie O’Leary revealed they are unlikely to be represented.

He said: “Outlander definitely won’t run as he has had a fall last week in the Clonmel Oil Chase. I think we will look at the John Durkan at Punchestown on December 11th for him now.”

“Empire Of Dirt will probably run in the Troytown at Navan on Sunday instead and Wounded Warrior runs at Thurles.”

Newbury clerk of the course Richard Osgood said he was happy with conditions yesterday, reporting: "It's soft, good to soft in places over hurdles and the chase course is good to soft, soft in places. We may get some rain tonight, but it'll be next to nothing and then we're mainly dry for the weekend."

FIRST PUBLISHED 3:38PM, NOV 23 2016
It was a very pleasing run at Ascot. We were giving a lot of weight away to the winner on quickish ground, so I'm very much looking forward to Saturday

One beast and one monster - superstar performances as the Flat finally takes off 'Talented' Al Aasy has William Haggas purring as trainer eyes big targets Whoosh! Dettori reaching for superlatives as Palace Pier powers home Skelton completes long and winding road to the top as Johnson takes his exit 'The Coronation Cup could be his next objective' - our panellists mark your card 16-1 from 50-1 - East India strolls home to the surprise of new trainer Williams