Santa Anita jamboree the hottest ticket in racing - bar none 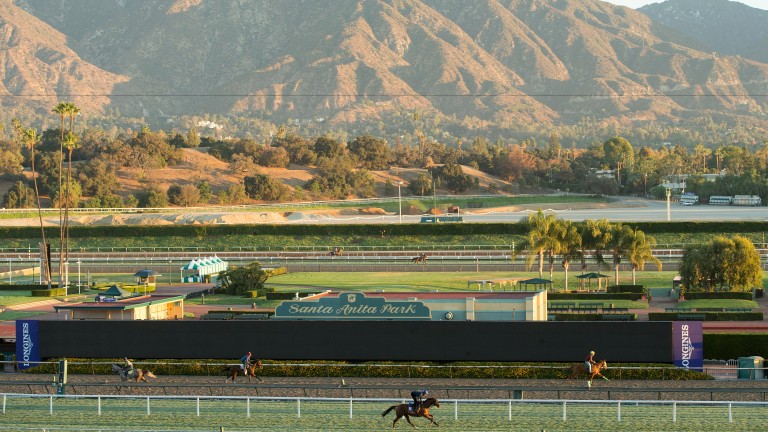 Santa Anita: centre of the racing world over the next two days
Edward Whitaker (racingpost.com/photos)
1 of 1
By Tom Kerr at Santa Anita 12:35PM, NOV 3 2016

Over the next two days Santa Anita will be the centre of the racing world. The Breeders' Cup calls itself the world championships and the validity of that designation has waxed and waned over the years, but no-one can dispute that this year a cast of true champions has assembled in the shadow of the San Gabriel mountains.

The meeting will climax in the early hours of Sunday morning for European watchers but it promises to be worth the late night and however many pots of coffee it takes to get there.

At its conclusion stands one of the most keenly anticipated races of any Breeders' Cup, in which the world's top two horses meet in a Classic which has the makings of a race for the ages.

The world's number one, California Chrome, is five and at the peak of his powers. His 79-year-old trainer Art Sherman has seen it all and if age is meant to produce circumspection then this horse is something else entirely, for Sherman can barely contain his enthusiasm.

California Chrome has already produced one exceptional performance this year, in the Pacific Classic down the coast at Del Mar where he humiliated Grade 1 champions and left seasoned race-watchers rubbing their eyes in disbelief. His trainer believes he is better still now.

Against him stands the world's number two, Arrogate, whose 13½ length victory in the Travers shattered a track record that had stood unchallenged since 1979. A three-year-old with just five runs to his name, Arrogate must prove that was no freak performance.

His name means to take something without justification. If he is to triumph over California Chrome – not to mention the likes of Frosted, a horse more than capable of running a huge race – there will be no question of undeservedness.

Before that thrilling conclusion, though, there are 12 races rich in drama and intrigue. As ever, European eyes will linger longest over the raiding party. In truth, though, this supposed continental army owes its strength almost entirely to one trainer, Aidan O'Brien, who has assembled a 12-strong team that is the largest and perhaps strongest he has ever shipped to a Breeders' Cup.

Their champion is Found, the Arc winner who will bid for back-to-back wins in the Turf after connections decided that such a tough and brilliant mare was too precious to risk in the Classic, where she would have run on a dirt surface for the first time.

This will be her tenth race of the year. In an era where champion racehorses are typically campaigned conservatively she is an exception and an enigma. But is there a limit to her endurance?

It is to an O'Brien that punters across in both Europe and America will look on Friday's opening card, on which four Breeders' Cup races serve as an aperitif to Saturday's main course. He has four runners across the Juvenile Turf and Juvenile Fillies Turf, but it is his son Joseph who might prove the raiders' best chance of a winner.

Mere months after taking out his licence and helped, no doubt, by his family connections to have the sort of horses few rookie trainers could ever hope to handle, O'Brien jnr will saddle Moyglare winner Intricately in the Juvenile Fillies Turf, with younger brother Donnacha set to take the ride.

Victory for O'Brien jnr would be notable on many levels: he would become the youngest trainer to win a Breeders' Cup race and join Freddy Head as the only person to win a race as both jockey and trainer. On the other hand, Donnacha would pinch his record as the youngest rider to win a race. You sense that would not trouble the young trainer too greatly.

O'Brien is not the only European making a debut of sorts tonight. Simon Crisford saddles Rodaini in the Juvenile Turf, his first runner here as a trainer but on familiar ground after 20 years as Godolphin's racing manager.

Saturday will also witness the Breeders' Cup bow of Henry Candy and Harry Bentley, who team up with brilliant Prix de la Foret winner Limato. His clash with Queen Anne winner Tepin in the Breeders' Cup Mile is a contest no less appetising than the Classic which will close the card. In fact, there is barely a race that does not promise to be tightly contested by well-matched and high-class horses.

"This is one of the strongest Breeders’ Cups I have ever seen," said Arrogate's trainer Bob Baffert. "I’ve never seen so much talent. This is the year to buy a ticket."

It's not too late, you know.