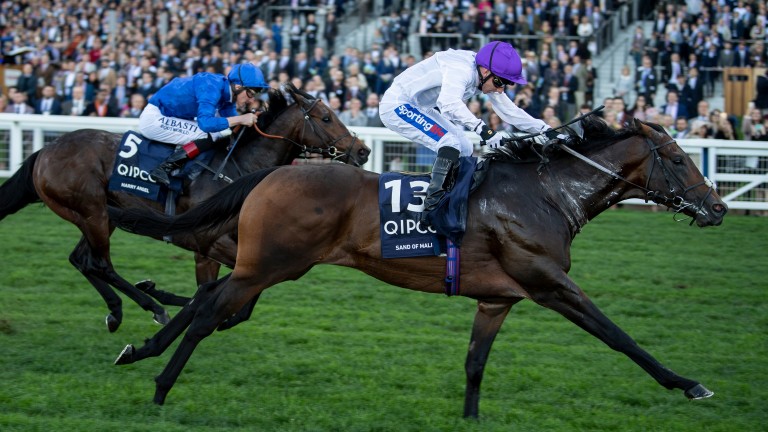 Sands Of Mali's biggest win came in the Champions Sprint at Ascot
Edward Whitaker
1 of 1
By Tom Peacock and James Thomas UPDATED 10:38AM, NOV 28 2019

Sands Of Mali, who performed on the biggest stages in the colours of Phoenix Thoroughbreds during this year, is a last-minute offering at next week’s Tattersalls December Mares Sale in order to dissolve a partnership.

It was almost exactly a year ago that Phoenix, whose founder Amer Abdulaziz Salman was named in a US court this month by a witness in a money-laundering trial relating to the international cryptocurrency scam OneCoin, bought into the Gimcrack and British Champions Sprint winner with a view to heading for the Al Quoz Sprint.

It was there that he made his debut in the Phoenix silks, finishing sixth, but he has not shown the same level of form for the Richard Fahey yard in three subsequent outings, including at Royal Ascot.

Sands Of Mali is owned along with the Cool Silk Partnership, an operation run by Scunthorpe United chairman Peter Swann with his mother-in-law, Barbara Wilkinson.

The colt is a son of little-known French-based stallion Panis, who was bought for £75,000 by Cool Silk and Stroud Coleman Bloodstock at the Tattersalls Ireland Ascot Breeze-Up in 2016.

Sands Of Mali is catalogued as lot 1621A and will be offered on Monday by Fahey’s Musley Bank Stables.

Swann explained: "I can't say what was in the whole agreement as it's confidential between partners but the idea was to run him this year under our joint colours and then send him to stud.

"He's had an injury-laden year and we couldn't get him in the October sales, which was the plan, and this is the next option. From day one this is where he was going to end up, there's nothing sinister, it's not in reaction to the Phoenix news. We're looking forward to him selling well on Monday night."

Matt Coleman of Stroud Coleman added: "We've had a few people express an interest in the horse as a stallion and, in the end, we thought the best thing for everybody would be to send the horse to the sale.

"He's been a fantastic horse for the Cool Silk guys, then obviously Phoenix bought into him at the end of last season.

"He won a Gimcrack, he won a Group 1, was second in the Commonwealth Cup and arguably should have won it. He's a beautiful horse and has been a fantastic racehorse and is here to sell as a stallion prospect."

Read more about this story

FIRST PUBLISHED 2:48PM, NOV 27 2019
In the end, we thought the best thing for everybody would be to send the horse to the sale.