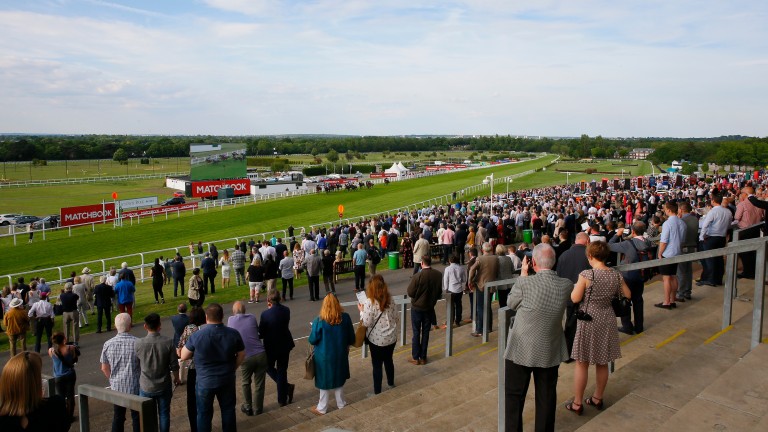 Sandown has rescheduled today's racing, with the first six races to be run five minutes after the initial planned time after abandonments at Chepstow and Newton Abbot allow the course to spread races out more equally on Friday afternoon.

The two cancellations mean York is the only other meeting on Friday afternoon, and the change of racetimes mean a much bigger gap between races at the two Group 1 tracks.

The 5f novice stakes which opens Friday's card at Sandown will be run at 2.05 but only the last race, at 5.25, will remain as previously planned with Goodwood staging racing this evening with the first race off at 6.05.

Sandown clerk of the course Andrew Cooper said: "It's a decision to balance to race times over the afternoon, but it is not a Sandown Park initiative we were asked by the BHA and we had no meaningful reason to say no.

"I thought we should stick to the time in the last with the evening racing rather than add another five minutes, that was my suggestion. It is the BHA's race times team who make these requests in light of abandonments."

60mm rain f @Sandownparki on Monday - making it the wettest 24 hours in my time here. Ground remarkably only Soft on Round Course and Heavy on 5f. Incredible 75mm f @EpsomRacecoursei yesterday pic.twitter.com/VcEeCmY6Jm

The ground at Sandown is currently soft, good to soft in places on the round course and soft on the sprint track. The hedge side, which turns into the stands side, on the round course is expected to see the majority of the running in the final three furlongs with a GoingStick reading of 6.7 compared to 6.2 on the far rail.

Cooper added: "We had 60mm here on Monday, 5mm on Wednesday and 3mm on Thursday. I've just walked it [the track] and it is a mix of good to soft and soft but the sprint is undoubtedly soft. I'm not anticipating a change, we would need heavier or more persistent rain than we are forecast.

"The stick says it is quicker on the hedge side but you don't walk it and think there is a huge difference. The last furlong of the stands side is a bit quicker than everywhere else which affects the averages [of the GoingStick]."

FIRST PUBLISHED 12:50PM, JUN 14 2019
The stick says it is quicker on the hedge side but you don't walk it and think there is a huge difference