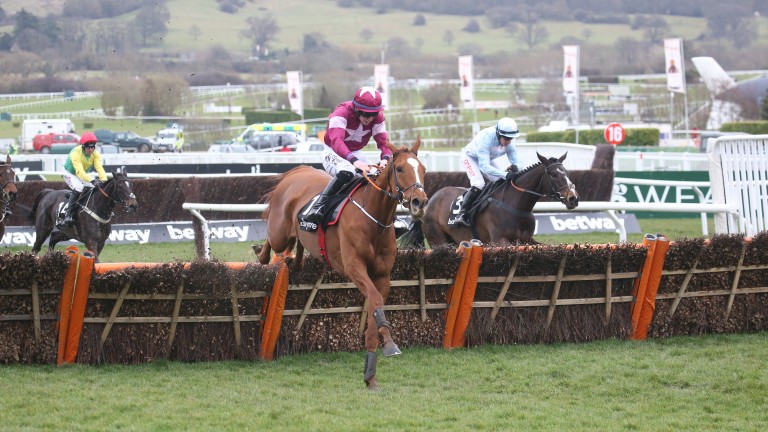 Samcro leapt to the head of the Champion Hurdle market on Monday after connections confirmed that race would be his big target this season, with trainer Gordon Elliott believing his rising star has a "great chance" of taking the Cheltenham crown.

A switch to fences had been an option for Samcro, a point-to-point winner who was ante-post favourite for the Arkle, JLT and RSA Chases over the summer, but connections are keen to have a crack at the Unibet-sponsored Champion Hurdle, a race neither Elliott nor owners Gigginstown have won.

Samcro is favourite with all firms, having deposed two-time winner Buveur D'Air at the head of the market. Ladbrokes trimmed him to 5-2 (from 3), with the firm offering odds of 11-2 that he remains unbeaten all season.

Nicola McGeady of Ladbrokes said: “News that Samcro will stay over hurdles this season has sent him straight to the head of the Champion Hurdle betting, replacing Buveur D’Air as favourite."

Samcro will commence his new campaign on Friday in the Grade 2 WKD Hurdle at Down Royal, where he could clash with Galway Hurdle winner Sharjah. The race was won last year by Melon, who went on to finish second to Buveur D'Air at Cheltenham, and by Jezki in 2013 on his way to winning the Champion Hurdle the following March.

Elliott said: "We've decided to stay over hurdles and he'll run at Down Royal on Friday. That will tell us a lot about him and whether two miles is the right way to go or whether he needs to be stepped up in trip. We'll get Friday out of the way before making any future plans."

When asked whether he thinks Samcro is good enough to win the Champion Hurdle next March, Elliott replied: "I certainly think he would have a great chance in it."

Elliott added in his Betfair blog: "I’ve never had a Champion Hurdle horse before and Gigginstown have yet to win it and we thought it was worth giving Samcro a shot at that race.

"He started off in point-to-points and when we bought him at Aintree he was bought as a future chaser and hopefully we'll see him over fences in the future. As far as this season is concerned, though, he'll be staying over hurdles and we're going to try and follow a path towards the Champion Hurdle.’’

Samcro has won four of his five races over hurdles, landing the Ballymore Novices' Hurdle at the Cheltenham Festival before falling in the Punchestown Champion Hurdle in April.

Jack Kennedy, who has been on board in all of Samcro's races over hurdles, believes the six-year-old has enough gears to be a Champion Hurdle contender.

Kennedy said: "I suppose it doesn’t really bother me what route he goes down. I just love riding him. Nobody knows what would have happened if he had jumped the third-last hurdle cleanly at Punchestown last season but he seemed to be travelling well at the time.

"He's come back in way stronger this season and he looks great, so we’re all very excited to get him back out.

"Obviously he had loads of option but he’s just such a versatile horse who has loads of gears and he’s an exciting horse for hurdles."

Betfair make Samcro their 1-3 favourite for Friday's WKD Hurdle, which has attracted ten possible runners at the five-day stage, with Sharjah available at 9-2 and the Iain Jardine-trained Bedrock next in the betting at 8-1.

FIRST PUBLISHED 10:12AM, OCT 29 2018
That will tell us a lot about him and whether two miles is the right way to go or whether he needs to be stepped up in trip

Samcro still has the Galway Plate lined up - and could wear headgear Darasso shows his class as Samcro flops in Listowel feature What's on this week: O'Brien chases Oaks glory at Cork plus Listed action galore