Samcro takes next step in bumper won by Don Cossack 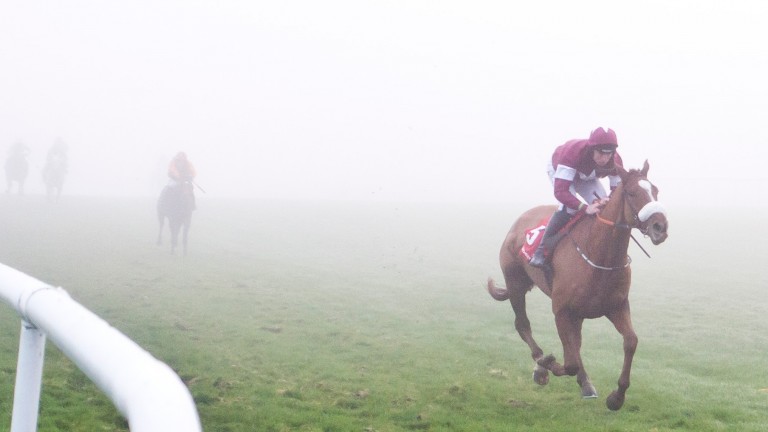 Samcro emerges as a clear winner from the fog at Punchestown last month
Patrick McCann
1 of 1
By David Jennings 3:16PM, DEC 18 2016

This was where Don Cossack's reputation began to soar. Last season's Cheltenham Gold Cup winner came from the most unpromising of positions to swoop past the trailblazing Rory O'Moore close home in the 2011 running and the fact that Gordon Elliott has picked out this contest for the exciting Samcro speaks volumes.

Elliott won this last year too, with Death Duty, and Samcro looks ready to follow in the footsteps of the aforementioned pair judging by his wide-margin win at Punchestown last month. We did not get to see much as the fog spoiled our viewing but the nine-and-a-half-length winning margin suggests he could be very good indeed.

His trainer thinks we might not see the best of him until next season, a scary thought for his colleagues should he post another wide-margin success today.

“He's a really nice horse but he's still a big, weak horse we won't see the best of for another year or two,” Elliott said. “It was a lovely start at Punchestown, although we couldn't see much, and he comes here in good form. I'm looking forward to seeing how he gets on.”

This is another exciting match between Elliott and Willie Mullins. The defending champion trainer takes on Samcro with Good Thyne Tara, who made a smooth return to action when winning a Cork bumper easily last month.

Samcro is highly likely to be a warm order in the market but Mullins holds his six-year-old mare in high regard.

Mullins said: "She has won two of the four bumpers she has run in and we’re hoping she can add to her tally. She's an improving mare and won very easily at Cork. It will be her first time taking on the geldings but she’s in good form and will handle the ground. We'll see how she gets on but the plan is to start her off over hurdles a bit later in the season."

Stuart Crawford won this in 2013 with Fine Rightly but he will have his work cut out to repeat the feat with Well Joey. Ballinderry Moth returns from a 524-day absence, while the sextet is completed by Sir Flash Harry and Simone, a half-sister to the ill-fated Simonsig.