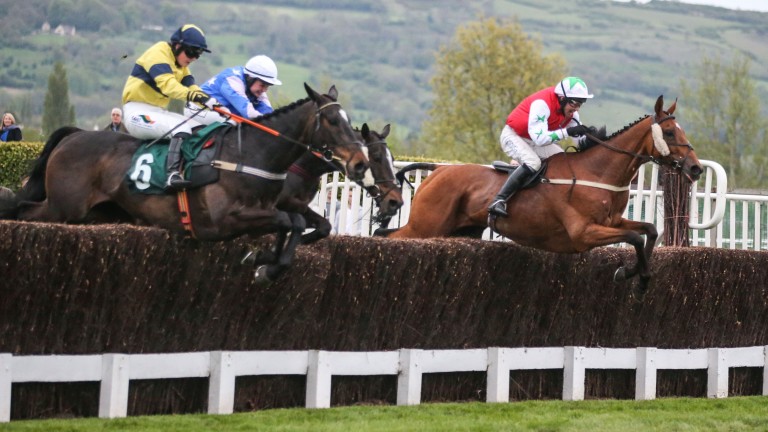 Over the last: first past the post Battle Dust (far), minus the weight cloth, jumps the last upsides promoted winner Excitable Island (near)
John Grossick
1 of 1
By Andrew King UPDATED 9:21AM, MAY 5 2018

There was considerable drama on the eve of the new jumps season as Battle Dust ran out the winner of the 4m½f hunters chase at Cheltenham on Friday evening but was later disqualified at a stewards inquiry' after his rider Alex Edwards weighed back in 12lb light.

Those who backed the 2-1 favourite inevitably knew their fate as Edwards’ saddle appeared to slip on the final circuit before the weight cloth fell to the ground approaching the home bend.

And, to add insult to injury, Edwards, who had performed a minor rodeo act to stay aboard the nine-year-old, lost his whip soon afterwards before passing the post in front by two lengths.

The resigned look of the rider, earlier successful aboard Barel Of Laughs in the Timico Mixed Open Gold Cup Final Hunters' Chase, told its own tale.

Original runner-up, Excitable Friend, was awarded the prize and Mon Parrain, who finished third, was promoted to second spot.

Stipendiary steward Greg Pearson said: “We called an inquiry straight after the race and then the clerk of the scales objected as Alex Edwards had weighed back in light.

“The saddle and girth were checked at the start and there was nothing wrong but during the race the tack slipped and Edwards lost the saddle cloth and weight cloth on the final circuit.”

BetVictor and Paddy Power have paid out on the promoted winner and first past the post.

FIRST PUBLISHED 8:50PM, MAY 4 2018
The saddle and girth were checked at the start and there was nothing wrong but during the race the tack slipped