Nicholas Godfrey has a look at the American Triple Crown 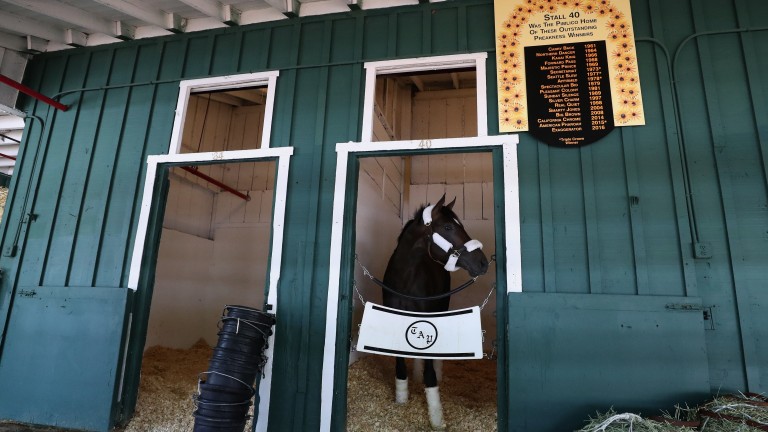 Always Dreaming looks out from the stall reserved for the Kentucky Derby winner at Pimlico, where he will bid for the Preakness Stakes on Saturday
Rob Carr/Getty Images
1 of 1
6:00PM, MAY 13 2017

1 Originating in mid-19th century horseracing in Britain, the term 'Triple Crown' has been transported around the racing world and into other sports and prizes involving competitive endeavours. Generally speaking, it is used to denote the three most prestigious events in any given field. Among triple crowns currently in operation are the Triple Crowns of Professional Paintball, Long-Distance Hiking, Science Fiction and the Triple Crown of the Westminster Kennel Club Dog Show in New York. The three-tiered papal tiara – which admittedly predates the St Leger – is now also called the triple crown (or triregnum).

2 Camelot notwithstanding, the British Triple Crown has been rendered an anachronism with the St Leger seldom considered a primary target for Derby winners – and a dwindling number of 2,000 Guineas winners contesting the Derby. The US Triple Crown, however, consisting of the Kentucky Derby, Preakness Stakes and Belmont Stakes in a five-week spree in May to early June, remains the ultimate prize of US racing.

3 The record books tell us that Sir Barton became the first Triple Crown winner in 1919 – but at the time he was never acknowledged as such, as the term was not in common parlance until the 1930s. Charles Hatton of the Daily Racing Form is said to have popularised the phrase.

4 Although each Triple Crown race is open to both colts and fillies, the latter take part only rarely. None has completed the sweep, but three have won the Kentucky Derby – Regret (1915), Genuine Risk (1980) and Winning Colors (1988) – and Kentucky Oaks winner Rachel Alexandra famously beat Derby winner Mine That Bird in the Preakness in 2009. There have been attempts to develop a 'Filly Triple Crown' and New York had its own 'Triple Tiara' between 1968 and 1993; eight fillies managed the feat.

5 The Triple Crown technically became possible with the creation of the Kentucky Derby in 1875 (the Belmont started in 1867, the Preakness in 1873). For a long period it was a moveable feast – for example, the Preakness was run before the Derby 11 times before 1931. Anybody with Triple Crown ambitions in 1917 or 1922 faced quite a stiff task: the Derby and Preakness were run on the same day.

6 The Triple Crown's sacred status was under severe threat in the early 1980s, when twice in four years the Kentucky Derby winner skipped the Preakness. In 1982, Eddie Gregson, trainer of Derby winner Gato Del Sol, reckoned his horse was better served by more rest and the longer distance of the Belmont, where he was beaten 14 lengths by Conquistador Cielo.

7 A $5 million bonus (no longer in existence) linking the three races was introduced after Spend A Buck's connections chased money elsewhere in 1985. The subsequent Horse of the Year won the Derby by more than five lengths but instead of going to Pimlico, he went back to newly reopened Garden State Park in New Jersey where the owners had offered a $2m bonus for any horse winning a pair of races he had already won, the Kentucky Derby and the $1m Jersey Derby. As traditionalists wrung their hands, Spend A Buck scored again in Jersey at odds of 1-20 to net $2.6m for two minutes' work. Runner-up was Creme Fraiche, who won the Belmont 12 days later.

8 The legendary Secretariat holds the record time in all three legs – though it took a bit of retrospective revisionism, Frankel ratings-style, for him to be recognised as the fastest Preakness winner. At the time there was a stopwatch controversy after the infield teletimer malfunctioned. Secretariat's time was registered at 1m55s, but a hand-held clocking was posted at 1m54.40s; still good, but no record. The Daily Racing Form's time was a record, though, at 1m53.40s; after scrutinising race footage, an even faster official time of 1m53s was given official recognition in 2012, 39 years after the event. That's how great Secretariat was: he could get faster even after he was dead.

9 Unlike in most European Classics, geldings are allowed to contest the Triple Crown races (though they were prohibited from the Belmont from 1919 to 1956). None has ever completed the sweep, although Funny Cide won the first two legs in 2003. Nine geldings have won the Kentucky Derby.

10 After three Triple Crown winners in the 1970s, an array of reasons were tabled for the subsequent list of near-misses before American Pharoah achieved the feat in 2015. Real Quiet failed by a nose at Belmont, where Charismatic broke down 50 yards from the wire and Big Brown did not finish (owing to dehydration, it was claimed). The most bizarre excuse came via the brilliant Spectacular Bid, whose Belmont bid was allegedly compromised after he stepped on a safety pin in 1980. Nothing to do with his jockey's premature move, of course.

FIRST PUBLISHED 6:00PM, MAY 13 2017
The Triple Crown's sacred status was under severe threat in the early 1980s, when twice in four years the Kentucky Derby winner skipped the Preakness

'I was caught by the dream – and it's gone on to become a compulsion' The drugs bust, the stun gun and the most extraordinary Royal Ascot finish 'Life moves on' - Sir Michael Stoute looks forward after his most painful year Alastair Down is invited into the wonderful world of the truly unique Derby hero Steve Cauthen: 'I was bulimic at times - and at some point you crack' 'I didn't steal it' - how Steve Cauthen broke the Derby mould on Slip Anchor