Ryan aims for another success with well-treated Haven 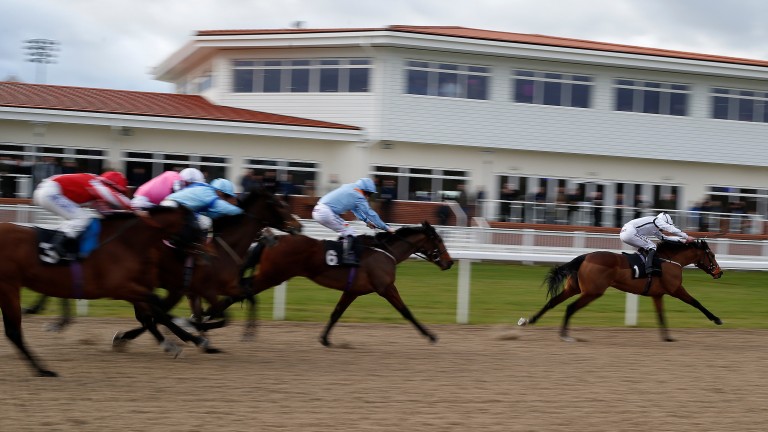 Nautical Haven: an easy winner at Chelmsford but the race was voided
Alan Crowhurst
1 of 1
By Graham Dench 6:00PM, MAY 19 2017

There is a good programme at 6f for the better three-year-old handicappers in the first half of the season, and the Betway Sprint Trophy has a tradition of attracting the smart up-and-comers.

Sir Mark Prescott's Prix de l'Abbaye winner Marsha was only second here off 95 a year ago, so the Richard Hannon-trained topweight Eqtiraan look vulnerable off 105.

If fast improving Quench Dolly isn't the one to beat him, getting 13lb, there are several other candidates, including Roger Varian's Ekhtiyaar and the Michael Dods-trained Holmeswood, who both shaped with promise in the same race on their return, and Nautical Haven, who has had his handicap mark preserved since winning a voided Chelmsford sprint fair and square in February and whose trainer Kevin Ryan won this with Captain Colby in 2015.

Richard Hannon, trainer of Eqtiraan
He ran a super a race there the last time and I think the trip will suit him. He's in good form at home, looking great and moving great. He should have an excellent chance.

Roger Varian, trainer of Ekhtiyaar
Ekhtiyaar seems to have stepped forward for his Doncaster reappearance and has an appealing profile for a race of this nature. He won his maiden on good to soft ground, so hopefully he will handle conditions. If he does, I would be hopeful of a good performance off a lovely racing weight.

Roger Charlton, trainer of Esprit De Corps
I've been frustrated by the handicapper, who put him on 88 after he won his maiden at Bath. The four horses who have come out of that race so far have been beaten an aggregate of 40 or so lengths, yet he has only been dropped a pound. I think he's badly treated, but we'll find out. I don't anticipate a problem with the soft ground, but you don't know until you try.

Adam Ryan, assistant to his father Kevin Ryan, trainer of Nautical Haven
He won the void race at Chelmsford and he won it well. Luckily they left his mark unchanged, so he's effectively a winner without a penalty, and this looked an obvious race to go for. I think the change in the going will suit him better than it does some of the others.

Ian Williams, trainer of Kreb's Cycle
I was pleasantly surprised at Chester, where his finishing position in no way represented how well he ran. It's a big ask, but if he's going to be winning races I'd prefer him to start doing so in a race like this at the bottom of the handicap.

FIRST PUBLISHED 6:00PM, MAY 19 2017
Luckily they left his mark unchanged, so he's effectively a winner without a penalty