Russell hopes rising as One For Arthur's National date nears 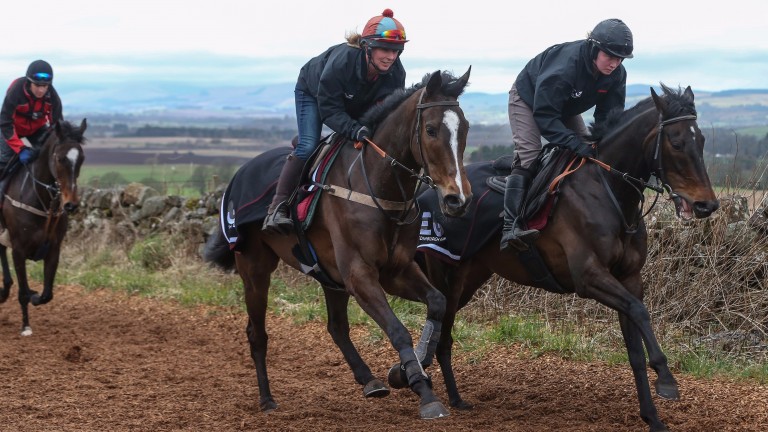 Peter Scudamore on Thursday described the growing excitement in the Lucinda Russell yard surrounding One For Arthur, their live hope for Saturday week's Randox Health Grand National, saying the unique fences are tailor-made for the 14-1 shot.

Eight-time champion jockey Scudamore, Russell's partner, never landed the National as a rider but does know how to win the race having been assistant trainer and business partner with Nigel Twiston-Davies at the time of Earth Summit and Bindaree's victories.

Speaking during a press day on Thursday at Russell's Arlary House Stables in Milnathort, Kinross, Scudamore said: "I've got to be careful because we've still got time to go, but his preparation has been exact, superb, spot on. If you practise well for what you're going to do it gives you some sort of confidence, and I feel we've got a good chance."

One For Arthur stayed on strongly for a three-length fifth to Vieux Lion Rouge over the National fences in the 3m2f Becher Chase in December before going on to win the 3m5f Betfred Classic at Warwick in January.

Scudamore added: "He has proven that he jumps round the course and the fences are built for him – he's that type of horse. He can stand off, he can fiddle, he can do whatever he needs to. Things can go wrong but we're not going there taking a chance with him over the fences."

Russell's three previous runners in the National – Greenhill Raffles, Strong Resolve and Silver By Nature – all completed the course, with Silver By Nature faring best of them when 12th in 2011.

One For Arthur will be bidding to become Scotland's second National winner following Rubstic in 1979, and Russell said: "He did a bit of work the other day and he just seems to be improving, so we're getting quite excited and there's a real buzz about the place.

"We want a bit of luck but if he gets a clear passage and a clear round I think he's got every chance."

One For Arthur won on good ground at Kelso last season but Russell would have reservations about such a surface. She said: "The only issue would be if it was good ground, down the first few fences he'd be outpaced in between them."

However, Scudamore’s concerns would have been eased by Aintree clerk of the course Andrew Tulloch, who said on Thursday: "The Mildmay is good to soft and the National course is soft and maybe even a bit wetter around the Canal Turn.

"We've had steady drizzle now for the last two to three days. It has been damp, overcast and murky weather, which has kept the ground nice and moist.

"I'm quite happy with that because I think we'll start to dry from next week, when the forecast temperature is due to be pleasant around 14C and 15C."

Fox on the comeback trail

Confidence is high that Derek Fox, out of action since fracturing his wrist and damaging a collarbone in a fall at Carlisle on March 9, will be able to take the ride on One For Arthur.

Fox was not in attendance as he was working on his fitness at Jack Berry House, but Scudamore said: "He sprung his collarbone and that's mended, and we're fairly confident the physiotherapist will say on Friday his wrist is okay.

"If he's passed fit he rides out on Saturday, he might have a ride on Monday – might – but he'd probably go to Carlisle on Wednesday in the bumper.

"I'm not really concerned about Derek's fitness. The facilities at Jack Berry House and the specific training they're putting these boys through, for riding, is most encouraging, and the steps forward since my day are magnificent. He's probably fitter than he's ever been."

Vicente, who will be running for the first time in the colours of Trevor Hemmings, seen aboard National winners Many Clouds, Ballabriggs and Hedgehunter, was described as his best ever ride in the race by Brian Hughes.

He said: "I schooled him this [Thursday] morning and he was good. He's not a horse I know well, but he's won a Scottish National and is better in the spring and better on better ground.

"I've won a couple of races over the National fences, but never got close in the big one. The yards I ride for don't really have National horses, so I'm relying on spares and he's the best spare I've ever picked up."

Stellar Notion is a top-priced 66-1 but Henry de Bromhead thinks that underestimates his chances. He said: He is in terrific form and schooled over some National-style fences on Tuesday and loved it. He looks the ideal type for the race and his form all season in big-field handicaps has been excellent."

Golf widows hoping for more than a clear round

One For Arthur is owned by the Two Golf Widows, namely Belinda McClung and Deborah Thomson, and Thomson had an unsurprising explanation for the ownership moniker: "They're very keen golfers the boys and they golf most of the time. I'm actually a golf widow today because Colin [Dempster] is on the golf course at St Andrews, and we thought it was a fun name to call ourselves.

"Arthur deserves to be there and it's very exciting. As long as he comes home safe, that's the most important thing."

McClung, whose husband Fraser was taking a day off from golf to attend, said: "He's looking fabulous, as good as he's ever looked. We've got a fresh horse going into the race and just need a bit of luck now."

When asked about how her nerves were, McClung replied: "Getting shredded! We'll enjoy it. When you go into racehorse ownership this is what you really want."

Aiming to become second for Scotland

Rubstic is the only horse trained in Scotland to have won the Grand National, that victory coming for trainer John Leadbetter and jockey Maurice Barnes in 1979.

Leadbetter trained in Denholm in the Borders at the time and on Thursday said of the win: "It lives on and it is a passport to the world. It opens doors you would never, ever have thought about."

Asked about One For Arthur's chance of posting a second Scottish success, Leadbetter replied: "The only problem might be, has he got the class? You need a class horse nowadays and he's not a Gold Cup horse.

"You take the top ten in the National this year and you're talking about Gold Cup material. You could put a pin in the top ten and any one of them could win it."

Barnes now trains near Brampton in Cumbria, while Leadbetter lives in Berwick-upon-Tweed, where he still keeps his hand in with training.

He said: "I have two or three point to pointers which keeps me occupied. Horses are like smoking, drinking and sex, they're addictive and the more you have the more you want."

FIRST PUBLISHED 6:31PM, MAR 30 2017
He did a bit of work the other day and he just seems to be improving, so we're getting quite excited and there's a real buzz about the place