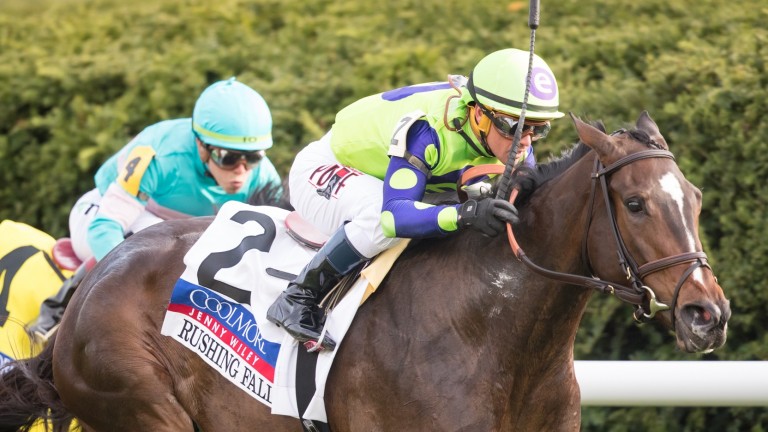 Rushing Fall returned with a sparkling performance in the $350,000 Coolmore Jenny Wiley Stakes at Keeneland, showing no signs of rust after time on the shelf.

The four-year-old More Than Ready filly ran for the first time since winning the Queen Elizabeth II Challenge Cup Stakes and scored her fourth stakes win at the Lexington track, where she has never been defeated.

Regular rider Javier Castellano was in the irons for trainer Chad Brown on the E Five Racing Thoroughbreds runner, who set the pace and held on by a length over stablemate Rymska.

Making her first start against older runners, Rushing Fall was sent to the lead kept a daylight advantage over her seven rivals.

Approaching the stretch as the field began to close in, the fleet-footed bay kicked clear again, with the only threat coming from Rymska, who was ridden towards the rail for a late rally. It was a half-length to Got Stormy, who completed the trifecta.

"She's come off of 90-plus-day layoffs and won phenomenal stakes races, but to come out after a long break, a year older in a Grade 1, and being tested by really good horses was phenomenal," said Bob Edwards of E Five.

"She's multidimensional. I love to see that, kind of reminiscent of Ghostzapper, changing up her game a little bit. Not to say she's in that league at this point, but reminiscent of classic horses changing their game as they get older and being more mature and being able to change their running style."

"I give all the credit to Mr. Brown, the way he's been training this horse since the layoff," Castellano said.

"This filly, she's so nice – the way she broke out of the gate, the way she relaxed. I just enjoyed the ride. She tired, just a little bit, but she finished strong and did it very easy."

The Jenny Wiley victory was the third in the race for both Brown and Castellano. Brown won with Ball Dancing in 2015 and Sistercharlie last year, when Brown trainees secured a the first three places. Castellano won the race on Ball Dancing and Hard Not to Like in 2014.