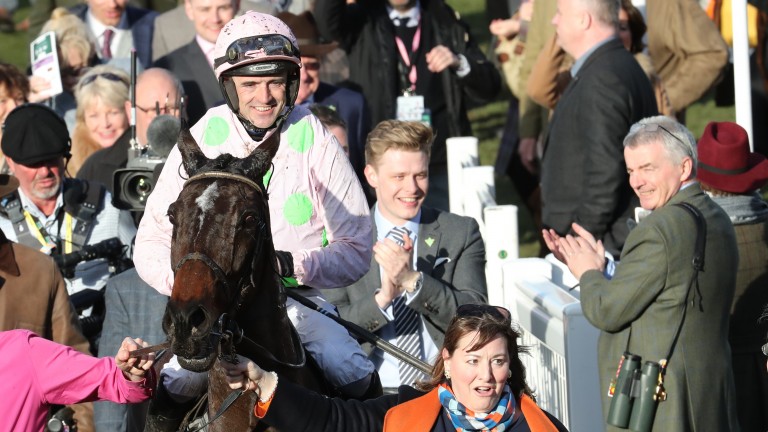 Luckless Ruby Walsh faces an anxious wait to discover the full extent of his latest injury, the Cheltenham Festival having been robbed of the involvement of its winningmost rider on Wednesday, when Walsh suffered a heavy fall from Al Boum Photo two out in the RSA Chase.

“My right leg is in a cast and the fall opened the fracture at the back," Walsh told Racing UK. "I won’t know full extent until Tuesday.”

Walsh appears to have suffered a recurrence of the broken leg sustained in November, from which he returned only last Thursday.

Speaking before Walsh delivered his update, Al Boum Photo's trainer Willie Mullins said: "I haven't had anything official confirmed but I'm told there might be a little fracture on the old fracture line and that it might require a cast for three weeks to a month. It looks like it might not be as bad as we first feared."

Screens were erected around Walsh immediately after the fall, but he was then seen being assisted on either side as he limped into an  ambulance.

"He just couldn't get his leg out in time and the horse rolled over on him," continued Mullins. "It looked a simple fall and when I saw the horse going down I thought he'd roll off. I took my eyes off it and I was amazed he was still down."

Walsh, who will visit a specialist in Dublin for further assessment, broke his right tibia when Let's Dance fell at Punchestown on November 18.

He returned with victory on Lareena at Thurles last Thursday and looked to be in great shape when enjoying a brilliant opening-day festival brace on Footpad in the Racing Post Arkle and Benie Des Dieux in the Mares' Hurdle.

However, his return has been cruelly cut short, his festival ending prematurely for a second time – in 2014 he broke his arm and dislocated his shoulder when Abbyssial fell in the Triumph Hurdle.

Patrick Mullins took over on Douvan in the Queen Mother Champion Chase on Wednesday but the partnership fell four out when leading.

Paul Townend stepped in on Walsh's intended mount Max Dynamite in the Coral Cup, but his luck was also out, as his initial booking, Bleu Berry, obliged under Mark Walsh. Mullins' double took his festival winners tally this week to five.

As a gesture of goodwill Paddy Power paid out on Walsh being top jockey at the meeting, while BoyleSports are refunding stakes.

'He'll never recover from that!' - the heroics of Killultagh Vic and Ruby Walsh Racing greats gather together for charity bike ride in memory of Pat Smullen New measures can ensure they are all well looked after Group 1 programme not suiting fast-ground horses