Ruby cracked as father Ted strikes with Any Second 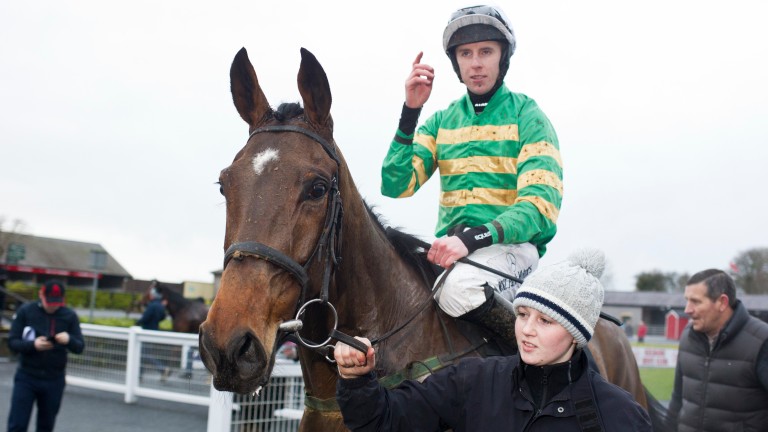 Willie Mullins was denied a fifth successive victory in this Grade 2 novice hurdle, which has been won by Vautour, Min and Douvan in the past three years, with Ted Walsh's Any Second Now staying on strongly to deny the Mullins-trained odds-on favourite Crack Mome.

The J P McManus-owned son of Oscar was cut to 20-1 (from 33) for the Supreme by the race sponsors following his length and a quarter win under Mark Walsh.

Despite being shortened in the Supreme market, Any Second Now's trainer feels it is unlikely his leading novice hurdler will be winning at the festival.

Walsh said: "I was happy turning in that he was going to be third to two fair horses and when he picked up he did it well.

"He's a raw sort of horse but he could be a very good horse. If he ran at Cheltenham you could see him running a race but if you were looking at him as a Cheltenham winner this year you might be clutching at straws."

How it panned out

Margaret Flynn's Dr Mikey ensured the race was a stiff test of stamina over two miles from the front but the eight-year-old faded on the turn into the straight with Crack Mome and Runfordave upsides in the lead.

It looked likely a battle between the two would ensue up the straight, but as Crack Mome got the better of Gordon Elliott's runner, the strongly-fancied Mullins runner made a momentum-halting mistake at the final flight.

Under a confident ride by Walsh, it was Any Second Now who capitalised on the favourite's blunder, staying on strongly after the last to run out a deserved winner.

The winning rider said: "He's only a frame of a horse so to do that on second run he must be good.

"They went a proper gallop the whole way and he jumped great. Chasing will be his game and I think he'll be a horse for next year."

Crack Mome kept on gallantly to take second with Runfordave two and three quarter lengths back in third, while Coquine D'aunou caught the eye staying on strongly to finish fourth.

FIRST PUBLISHED 2:29PM, JAN 14 2017
If he ran at Cheltenham you could see him running a race but if you were looking at him as a Cheltenham winner this year you might be clutching at straws