Tom Kerr investigates the thinning ranks of those who own racehorses 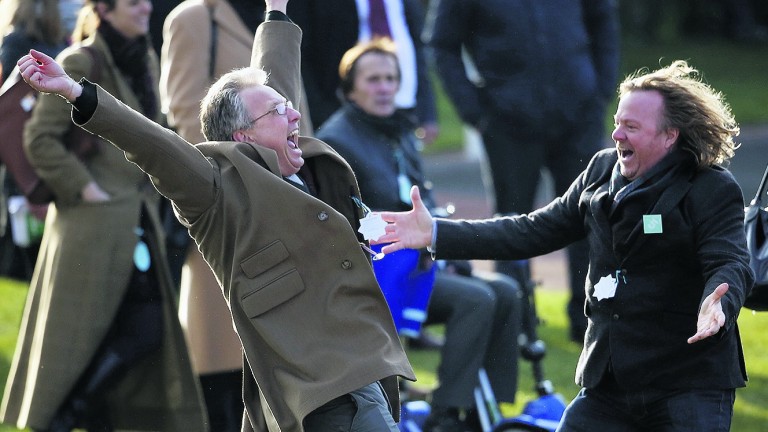 Racehorse ownership is a story of highs and lows, but the balance needs working on
Alan Crowhurst
1 of 1
1:13PM, MAY 21 2017

On a sunny January day at Lingfield this year, Bill Davis achieved the dream of every owner: he stood beaming in the winner's enclosure alongside his pride and joy, a mare named Ayr Of Elegance, and celebrated coming first past the post. What made this story notable enough to generate headlines across the mainstream media was that Davis had been a racehorse owner for more than a quarter of a century without once previously gracing the winner's podium.

Davis was dubbed 'Britain's unluckiest racehorse owner' by the press and his long, patient wait for success made for a delightful story. He was toasted as an exemplar of endurance, a man who tried and tried again and did not allow defeat to wear down his spirit. Yet no-one could have blamed him if he had quit the sport years ago, weighed down by heartache and expenditure. "It was just madness that kept me searching for that first win," he said.

While Davis's long wait for success marks him out as an outlier cursed by poor fortune, the madness that kept him searching is evident in many long-term owners. They pour vast sums into racing for paltry returns, with around 30 per cent receiving no prize-money in any given year and owners of low-class horses unlikely to see ten pence back for every pound invested.

Those, like Davis, who remain through thick and thin, haemorrhaging money through the years, typically do it for the love of the game and for the sheer joy of being involved with racehorses. Some might enter the sport dreaming of glamour, victory and riches but if so those notions are soon disabused – more expect nothing other than to lose large sums of money. As the old wisecrack goes, the only way to make a small fortune in racing is to start with a large one.

The financial contribution to racing of all these owners is vast. If sales are factored in, the figure runs into billions of pounds per year, but just keeping horses in training cost British owners around £290 million in 2015, a sum more than five times as large as that realised by the bookmaker levy scheme of the same year. According to the most recent numbers provided by the Racehorse Owners Association (ROA), the average cost of keeping a horse in training is £22,595 per year on the Flat and £16,325 over jumps. For many, that is an unsustainable or unappetising burden when the return on investment is so low and success frequently elusive. 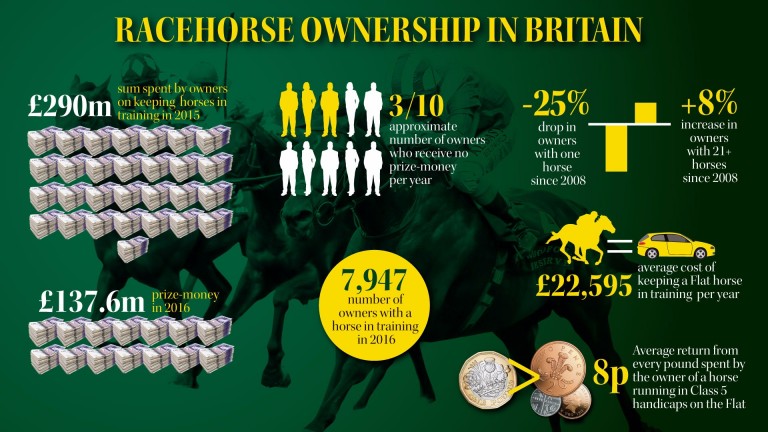 Relying on the benevolent madness shown by owners like Davis has served the sport well in the past but it is no sort of business model for the future. Already the strains are clearly showing. In the past decade thousands of owners have left the sport, particularly at the grassroots end, and many of their places in the sport have not been filled.

Racing's ability to halt and reverse this trend – to save racehorse ownership – is the single greatest challenge facing the sport today.

Where did all the owners go?

There is the odd ray of light for racing. Partnerships have performed well relative to other models of ownership and now account for almost three-quarters of all active owners. Also, the number of owners with more than 21 horses in training has soared from 40 in 2002 to 79 in 2015, indicative of how the sport has become increasingly reliant on a small but growing group of mega-investors such as Godolphin, Qatar Racing and Al Shaqab. But as these behemoths grow they threaten to further squeeze out the small owner. 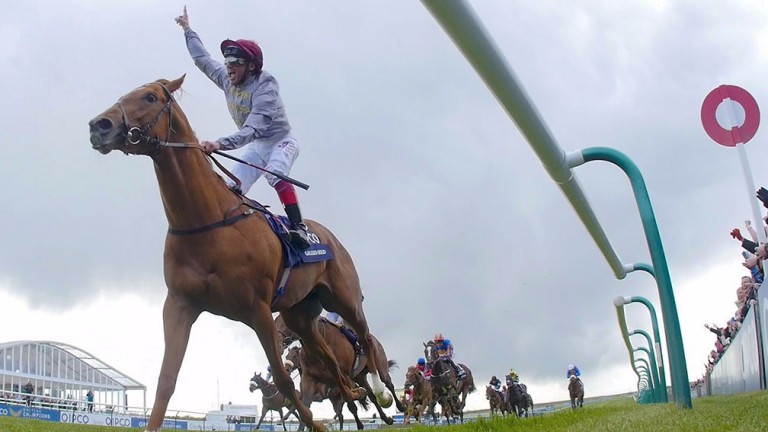 Racing has become increasingly reliant on mega-investors such as Al Shaqab
Mark Cranham
"It's a massive issue for the sport that we have lost that level of ownership," says BHA chief operating officer Richard Wayman, who is leading several initiatives to halt the decline. "We don't operate in a bubble, there's been a double recession through that period which clearly will have had an impact on this.

"But that to one side, this has to be one of the key priorities for the sport in the coming years, to reverse that decline and begin to grow ownership again at all levels. This is a cross-industry challenge and the sport's future depends on us being able to reverse the decline of recent years."

A sport that in the course of a single decade loses almost one in five of anything – fans, players, punters – is in trouble. When those lost participants are as economically vital as owners are to racing, it is clear there is a crisis brewing, one that if not checked will cripple the sport.

The Racing Post, with the help of more than a dozen interviews conducted with owners, syndicate managers and others from across the racing industry, has sought to understand why the decline has occurred and how it might be reversed. To that end, this newspaper has identified five areas where action should be, and sometimes is being, taken to make the ownership experience more appealing.

It is impossible to address the question of ownership without first confronting the impoverished elephant in the room: the sport, always expensive to get into, is in Britain uniquely unaffordable. In 2016, the ROA found that more than 80 per cent of lapsed owners cited the expense of owning as a reason for quitting, while over 60 per cent mentioned poor prize-money, making them the two most commonly cited reasons for leaving the sport.

Famously, British owners receive less than a 25p in the pound return on their investments in racing, around half what their counterparts in France can expect, but recent research carried out by the BHA shows that, as prize-money is not equally distributed among owners, an owner of a modestly talented Flat horse can actually expect to lose an average of 92p in every pound invested. 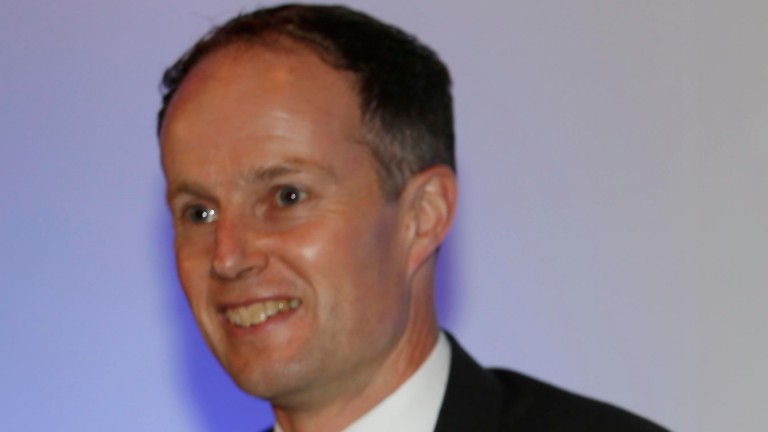 Richard Wayman suggests low-level races could be doubled in value to £6,000
"The economics of it are so unattractive that it is very hard to retain people," says Wayman. "The sport works very hard to recruit new people, but as they come in you're losing people out the other end and working very hard just to stand still."

While prize-money has reached record levels in Britain, hitting £137.6m in 2016 (up from £93.9m at its nadir in 2011), it has largely been spent at the top end of the sport, lavished on festivals and feature races at the expense of grassroots racing. Little of that spending has found its way into the pockets of ordinary owners.

With the advent of the reformed levy and the transfer of funding control to British racing, exercised through the new Racing Authority, an opportunity to address this problem has emerged and a two-stage plan set to be rolled out next year has been proposed.

First, money will be ploughed into low-level racing, where many races have not risen in value for a decade or more (Wayman suggests a £3,000 race could become a £6,000 race). Second, the sport plans to begin paying prize-money down to eighth place, a scheme designed to return more to owners and encourage competitive field sizes. "Eight runners is important to us in terms of creating a product people want to bet on," says Wayman. "If we can reward horsemen for creating eight-runner fields, then potentially everyone is benefiting from that."

While much can be done to improve the prize-money situation for those at the bottom of the sport, the reality of Britain's levy-based funding model means the return-on-investment figure is only ever likely to shift from appalling to unappetising. That does not preclude ownership from being successful, but it does mean the sport must seriously consider the value for money its product offers prospective owners.

According to the ROA, the average cost per run for owners is over £3,000, making each trip to the racecourse equivalent in cost to a luxury holiday. Yet for many the racecourse experience is more Butlins than Bahamas. Owners' complaints indicate something bordering on indifference from some of the tracks visited, while tired and overcrowded owners' areas are a common complaint.

"One thing our members want is a warm welcome by someone who is expecting them to arrive rather than a rather bleak entrance," says Charlie Liverton, chief executive of the ROA. "It's not all about champagne and caviar. The average age of an owner is 59 – a cup of tea and a sit down actually would make the world of difference." 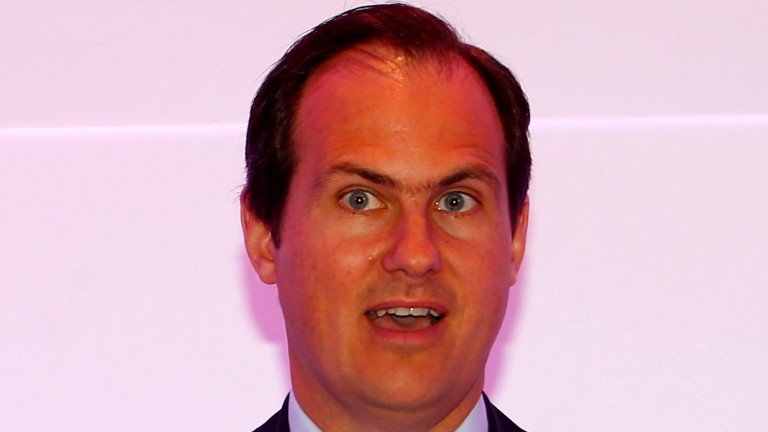 Charlie Liverton: "A cup of tea and a sit down would make the world of difference"
A lack of something as basic as comfortable seating indicates a sport that is far off its aspiration to offer owners a luxury experience. The owner experience is now at the centre of farsighted track administrators' vision for the future, especially as media rights payments – a lucrative source of income for racecourses – are increasingly linked to field sizes.

"All our thinking about the future is what we can do for the owners to improve their experience," says Bill Farnsworth, general manager at Musselburgh, which holds an ROA gold standard award for its owner experience and is one of several courses planning new facilities. "The cost of owning a racehorse and frustration of owning a racehorse is huge, so it's a major achievement just getting to the racecourse and the least we can do is treat them like it's a special day out."

FIRST PUBLISHED 6:00PM, MAY 20 2017
The sport's future depends on us being able to reverse the decline of recent years