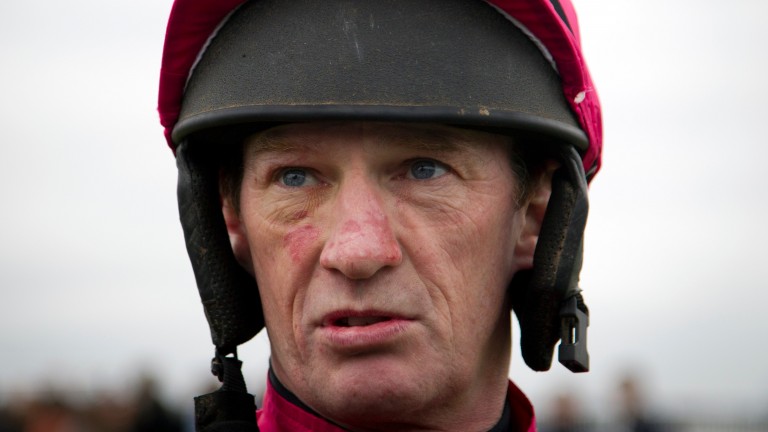 Paul Carberry: "We were getting stick from all sides. The papers were having a field day"
Patrick McCann (racingpost.com/photos)
1 of 1
UPDATED 2:00PM, APR 18 2020

In an extract from his autobiography One Hell Of A Ride, the legendary Irish jockey takes us to the eye of the Harchibald storm at Cheltenham in 2005

On the racetrack, all was going well in the build-up to the 2005 Cheltenham Festival. I had a nice few rides booked, but the Champion Hurdle, in which I was riding Harchibald, was the race everyone was talking about.

We had a very strange build-up to the festival as we didn't run Harchibald at all since Kempton at Christmas. Clearly, he would have been a bit track rusty although he was working well at home. But, in the final days, things weren't looking great.

Ten days before Cheltenham we did a bit of work with him after Saturday racing on soft ground at Navan with about seven other horses and we tailed off last. At The Races were there filming and after that piece of work Harchibald drifted out in the betting and eventually went off as a joint 7-1 third-favourite for the race.

In the days up to the big race all the talk was about the battle for the Champion Hurdle crown. I know Ruby Walsh, AP McCoy and Barry Geraghty were all on a panel on Channel 4's The Morning Line and when they were asked who was the most gifted jockey in racing, all three said my name.

These things are nice to hear from your fellow jockeys but sometimes these things can backfire, because if I am the most gifted, well then some will ask why I haven't been champion jockey more times. Or why haven't I won a Gold Cup. Or a Champion Chase, or indeed, a Champion Hurdle? The day had started off well. I'd finished second on Wild Passion in the first race, the Supreme Novices' Hurdle, behind Arcalis, and then finished fourth in the Arkle on Watson Lake. Next up was the big one.

As we walked around the parade ring for the big race you could feel the excitement growing. The reigning champion Hardy Eustace was again being ridden by Conor O'Dwyer and was at the head of the betting alongside the well-backed Edward O'Grady horse Back In Front, ridden by Ruby. The field was packed with quality hurdlers, with Brave Inca, Macs Joy, Essex, Rooster Booster and Accordion Etoile all lining up.

'Harchibald was still full of running'

The race started off well and, keeping Harchibald well covered towards the back, I started to make my move on the back straight. Hardy Eustace had gone off in front as usual, with Barry Cash on Brave Inca and AP on Essex leading the rest. Ruby was going well on Back In Front but he weakened from two out and was never really in with a shout after that. Essex fell away around the same time. I was now passing some tired horses and Harchibald was still full of running.

When we came to the second last I was lying in third place, cruising behind Hardy and Brave Inca, with both horses being ridden hard. Just then, Brave Inca took a swerve to the right going over the second-last hurdle and left a gaping gap which Harchibald jumped into, making almost two lengths in air.

To another horse this would have been seen as a dream run as he pulled alongside the leader Hardy, but I felt it was too early and would have preferred to have had him covered up until the last. It's a steep hill home at Cheltenham and you don't want to be there too early, especially on a horse like mine. The crowd suddenly went wild when they realised how easily Harchibald was going, with his head still in the air, and I hadn't moved a muscle.

In running, we would have been probably long, long odds-on to win as Conor was on full drive on Hardy and Barry was pumping away on Brave Inca. I was in between them, looking all over the winner, and we winged the last. 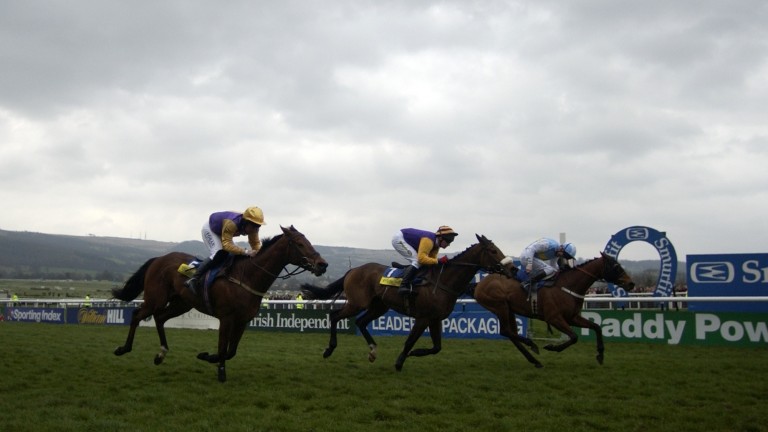 But it wasn't to be. I cruised past Barry and was eyeball to eyeball with Hardy, who as a dour stayer was just about keeping his nose in front. Fifty yards from the line I decided to go for it and get Harchibald to get his head down. When I did there was nothing there and he flattened out in seconds. We flashed past the post in second place, a neck behind the now two-time champion hurdler Hardy Eustace, with Brave Inca back in third.

I was devastated. It was there to be won and we didn't. The first prize was almost £200,000 with second place getting less than half that. But for me right then and there, and I suppose ever since, it's never been about the lost money, it was about winning the race. The horse deserved it, my boss Noel Meade and the owner Des Sharkey deserved it, and the fans deserved it. For God's sake, I think I deserved it too. But the punters weren't exactly in a sympathetic mood as I made the journey from the post to the parade ring.

It's a long trek back past the stands and betting area at Cheltenham when you're coming back after a race like that. You have to take the horses down a sand runway past the entire run-in between the stands and the racecourse and then turn left through the crowd and behind the main stand to the parade ring and winner's enclosure.

You are within arm's length of the 60,000 crowd who are either saluting you or, in some cases, baying for your blood. While Conor stood up in the irons draped in an Irish tricolour saluting the crowd, I was coming back to jeers and taunting from the crowd.

You say that it doesn't get to you, but at times it does, and it did then. Punters were roaring 'What the f**k were you at? You should have hit him?' and 'Why didn't you kick on when you could have, you f**king eejit'. I don't normally listen too much and was lost in my own disappointment as I made my way back to the ring where Noel and the others were.

Should we have kicked on earlier?

He had stood beside Dessie Hughes for the race and he was convinced we would win it and he said that even Dessie had thrown the hat in at that stage and was just waiting on Harchibald to pass his horse and win. We had come so close to pulling off one of the greatest Champion Hurdle wins of recent years and no matter how many times you try to leave it behind, the nagging doubts and doubters are still there.

There is no way of knowing if we would have won if I had kicked on earlier and I still believe I gave the horse the best chance of winning that I could have. But Noel struggled with it in the weeks after the race. He probably still does. We were getting stick from all sides and the papers were having a field day.

Everyone was asking his opinion on it and, in fairness, publicly he always backed me as knowing the horse best. But I know privately he was still hurting. He proved that two weeks after the race when he asked me a second time whether I thought we would have won if we kicked on earlier. I gave him the same answer and he left it at that.

I have watched the replays and I know how it looks. I suppose you look at it and say, 'Surely there was some way we could have run the race differently and won the race'. 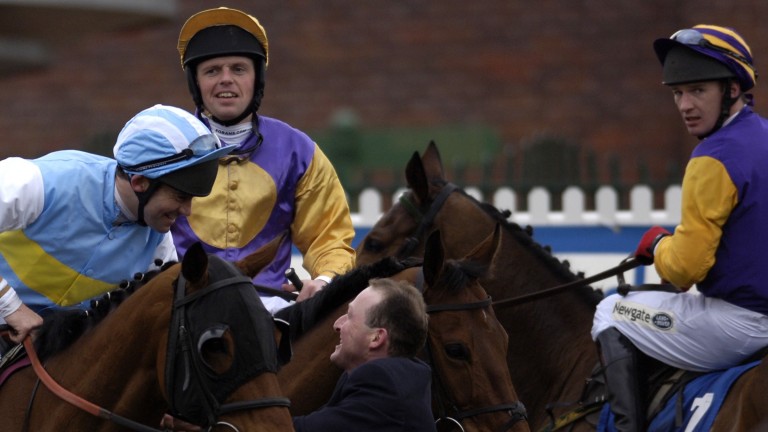 Paul Carberry (right) looks on wistfully at what might have been as Conor O’Dwyer and Hardy Eustace receive the acclaim after the 2005 Champion Hurdle
Edward Whitaker (racingpost.com/photos)

Kicking on earlier, waiting five yards later, it would drive you mad thinking about what could have been. The truth is that Harchibald did nothing in front and Hardy Eustace, then at his absolute peak, was a tough horse to pass. Noel has watched the replays too but we have never watched it together.

However, then and now, I'm sure that I rode the horse the way he needed to be ridden and I was proved right a few weeks later in the Emo Oil Irish Champion Hurdle at the Punchestown festival. Hardy wasn't running and on paper we had only Brave Inca to beat and the betting suggested it would be a cakewalk as we were odds-on.

Before the race Noel said to me something like, 'Now for f**k's sake, let's not have another Cheltenham. If he's going well enough kick him on and go for it. Don't be just sitting on him again trying to prove you were right all along'. So I just said 'grand so' and ran the race he wanted me to.

There were only five runners in the race with really only Brave Inca and Macs Joy to beat. The other two outsiders made up the numbers. AP was on Brave Inca that day and made all the running. I kept Harchibald well covered, but in touch, and made my move at the last hurdle where I jumped into the lead and kicked for home.

We were cruising, but as soon as I kicked him on after the last he suddenly came off the bridle and emptied out. Brave Inca passed us on the run-in. I had made a point but I still felt crap about it, as nobody wanted Harchibald to win that race more than me. I was thick with rage after the line and I was waiting to talk to Noel. I wouldn't normally say a whole lot to him after a race but it was personal this time. 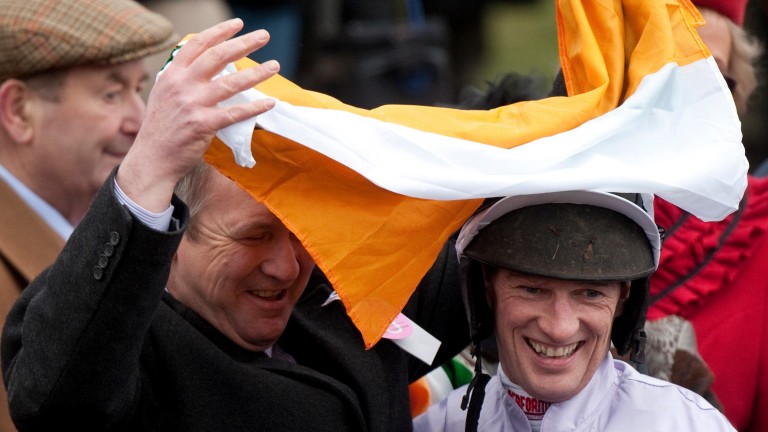 I met him in the parade ring and I just said to him, 'I hope you're happy now. Don't ever tell me how to ride a f**king horse again'. I was fuming. I'd put up with so much shit for the previous month about the Champion Hurdle at Cheltenham and now here I was in second place again, when this time I knew we would have hacked up if I'd been allowed ride the horse the way I knew he should be ridden.

This time there were no jeers from the crowd. But with a difference of over 50 grand between the placings, it was still a tough one to swallow. Noel didn't say anything back. He just looked at me blankly, raised his eyes and walked away. Noel has a great way of defusing situations and I'm glad the conversation didn't turn into a full-blown argument because I wasn't really in the mood to listen.