Man of the people: Alastair Down's interview with the extraordinary Mick O'Toole 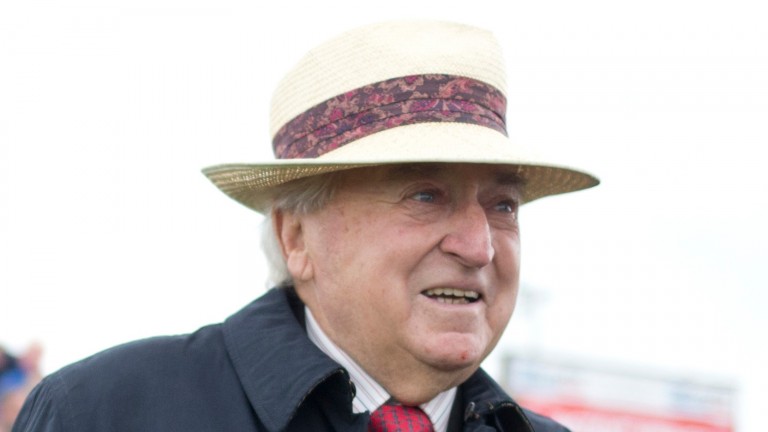 He is 80 on Sunday and by rights there should be some little signs of wear and tear because his has been a life packed unfeasibly full of early mornings, late nights, climate-changing gambles, eight Cheltenham triumphs and success at the highest level on the Flat.

Yet the good Lord, instead of rendering him bent with age and wreathed in wrinkles, lets him wander round seemingly unaffected by the passing of eight decades with his foot flat to the floorboards. And that is because when Mick O'Toole comes to judgement the jury will be unanimous that the devilry in him never got the better of his abundant decency and unquenchable sense of fun.

In recent years the word 'legend' has been devalued by attachment to folk who will never merit the description if they live to be a thousand. But O'Toole is arguably Irish racing's most legendary character, loved by an army of friends and held in great affection by the public because he has always brought more to the table than he has taken away from it.

He says: "From the moment I could walk I was around racing and trying to back a winner. I was a regular punter from when I was a child and I still am.

"Keep an account of all my bets? God no, if I'd kept a record of everything it would have put me off ever having a bet again!

"When I started training I had 26 greyhounds and two horses bought with the money won on the dogs. The first horse I bought was Lintola with my pal, the great Jack Doyle. We got her at the December sales in 1965 but in my innocence I didn't realise that she couldn't run in Irish handicaps because she had won in Britain. She could only run in British handicaps."

So the man who was to devise more plots than Agatha Christie found a 5f event at Edinburgh and Garnet Bougoure, the only Australian ever to be champion jockey in Ireland, rode Lintola in her work at home.

O'Toole recalls: "It was a rubbish race and all the money went on away from the track, with none of it on course. She opened at 16-1 and if the start hadn't been delayed ten minutes that is what she'd have started at, but we weren't complaining with an SP of 8-1. That Edinburgh win got plenty of publicity." 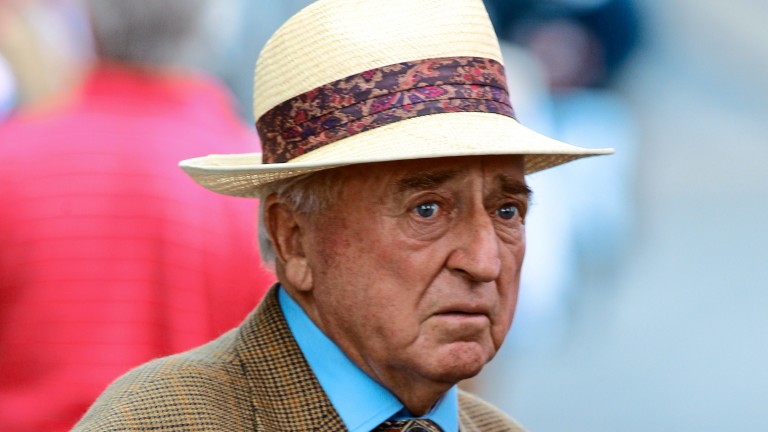 Trainer Mick O'Toole: "For two years I lived in one of the stables until we built the house"
Patrick McCann (racingpost.com/photos)

His first major victory came in 1969 when St Sebastian landed both the Irish Cesarewitch and a right touch and a year on Mighty Quin took the Irish Cambridgeshire for Joe Lewis, now the Bahamas-based billionaire currency trader and player of markets thought to be a pivotal figure in the vast fortunes assembled by the Coolmore hierarchy and their close allies.

From his early days O'Toole forged a team of friends and allies who stuck with him down the years and bet like kicking mules. Men like London rag trade kings Benny Schmidt-Bodner and Dave Fisher, Ulster bookie and Barry McGuigan manager Barney Eastwood and in times to come Robert Sangster, who was never averse to a bottle of Bollinger, a blonde and a bet.

O'Toole moved to Maddenstown on the edge of the Curragh in 1968. He says: "For two years I lived in one of the stables until we built the house and my wife Una and the two kids came down." When I remark that he was young and that it was probably no great hardship, he shoots back: "I was over 30 and that is plenty old enough to be in a stable!"

Mick the trainer was every bit as much of a dealer as a Mississippi riverboat gambler. Scanning through the record book he has kept of all his winners, he says: "In April 1969 Notification won a bumper at Fairyhouse with DK Weld up and we sold him for 15,000gns, which was a sum unheard of those days.

"I'd say Dermot rode more winners for me than he did for himself and if one got beat with him on then you knew you shouldn't have won. It was life or death sometimes and he reminded me recently of the day I was leading him out of the paddock and told him 'if this doesn't win you will never see me again'.

"There aren't the same characters on course that there used to be. Back then everyone was struggling and everybody was trying to pull a stroke on someone else and, believe me, there were a hell of a lot of clever fellas about."

But few were as quick on their feet as O'Toole and as the operation cranked up in numbers and quality the horizons were extended, and in the 1970s Mick became the dominant Irish force at the meeting that matters more than any other to the Irish.

His Cheltenham Festival winners started with future Gold Cup winner Davy Lad, who landed the Sun Alliance Novices' Hurdle in 1975. He recalls: "We always thought he was very good from when he won two bumpers at four, and he went to Cheltenham as favourite. I'd had 20 monkeys with Sean Graham before Christmas and that was a fair bet back then, but I was never a worrier and always took the losing just as well as the winning.

When quizzed, Una says: "His attitude was always the same whether he had 100 on or 1,000 or whether he won or lost. I'd be sorry if he lost and we might be a bit penniless for a week or so, but he never let it affect him and he was the most brilliant man with his staff. He was hugely generous to them and would never see them go short – that was just one of the reasons they stayed with him forever."

Mick interrupts: "Who wrote you the long-speaking part all of a sudden?" But you can tell that their 52-year partnership has been a fabulous blend of love and loyalty and it takes an exceptional woman to ride the whirlwind of half a century battling the bookmakers with such unflappable equanimity.

'That was a disaster – everyone was on him'

Most of O'Toole's festival winners were hot to the touch in the market; to punters (and bookmakers) of a certain vintage, names like the Arkle and Champion Chase winner Chinrullah, Parkhill, Mac's Chariot, Hartstown and the great Davy Lad himself are the very stuff of Cheltenham legend.

But there were festival reverses too, none greater than when Mount Prague, backed by all Ireland as if money had lost its value, failed to win the 1977 four-miler. Mick says: "That was a disaster – everyone was on him. He was absolutely cruising when he fell at the 18th and a sigh came off the stands that afternoon that I can hear to this day. There are probably still people paying off the bills."

The man in the saddle was Ted Walsh, who rode stacks of winners for Mick and says: "I'll never forget it as I broke both my collarbones, although I wouldn't have been in as much pain as some of the fellas who backed Mount Prague.

"But I had great times with Mick, not least because he is the most wonderful man with the quickest of brains and a fantastic sense of humour. Even now you couldn't begin to print the sort of scrapes he got me into."

Among the greatest gambles O'Toole landed was when Carrig Willy landed the 1980 Sweeps Hurdle. He says: "I bought him off John Oxx and he was a colt in those days and had been running bad. But he was a different horse after we cut him, although he was still handicapped on his old form as a colt."

On the morning of the race that was to become the Ladbroke, O'Toole's great friend Mike Dillon was a breakfast guest at Maddenstown and the trainer duly struck a hefty bet. Then, as Dillon recalls, "the problem was that all the owners at breakfast followed him in".

Carrig Willy duly won and O'Toole netted over £30,000 which, as he appositely puts it, was "an effing fortune in those days". This was the touch that gave rise to the famous remark: "What Mike Dillon now knows is that bacon and eggs can come expensive on the Curragh."

'Dickens Hill was as nasty as he was good'

Flat success inevitably followed for O'Toole, with Balios his first winner at the royal meeting when landing the 1972 Ascot Stakes, but much his best summer star was Irish 2,000 Guineas and Eclipse winner Dickens Hill, who was beaten into second place in both the Derby and Irish Derby by Troy.

Mick says: "Martin Brassil looked after him in the yard and it was no easy job as Dickens Hill was as nasty as he was good and would eat yer, bite yer and kick yer.

"But he was tough, Jesus, he was hardy and he never did manage to bite me, the bastard! If only he hadn't kept running into effing Troy. A lovely man called Jean-Pierre Binet had 60 per cent of him and I had 40. We were lucky to sell him to stand at stud with John Gaines in America. He was a huge disappointment as a stallion, but you would only ever understand how disappointing if you knew how much we got for him!"

Suddenly, in the late 1990s, Mick stole quietly out of the limelight and simply didn't reapply for his licence. No fanfare, no portentous press releases – he just folded the training tent and retired.

He explains: "Things were getting harder and I just wasn't going forward anymore. I just decided there were plenty of other things I wanted to do. The good days had always outnumbered the bad days and I had kept enough money to see me out.

"And I have looked after myself the last ten years, even if I didn't for the previous 70. I swim most days and play a lot of golf, which I am not bad at, believe it or not.

"And I have a few bits and pieces of horses on the quiet that people don't know about and I still race a lot, see all the same people and have plenty of bets still.

"There's nobody in Britain or Ireland I can't talk to."

Indeed, O'Toole did something few people get exactly right – he timed his retirement perfectly, leaving the stage before the cheers rang thinner and the applause began to fade. He is a familiar figure at Leopardstown, Galway, Fairyhouse and Punchestown and they don't run the first at a big meeting at Cheltenham, Ascot, York or Newmarket until the man from Maddestown has arrived.

From long observation I can tell you something else about this special man. Wherever he goes he leaves folk with a smile on their face. For all the Gold Cups and great tilts, the high days and the humbling ones, it is the man himself who shines through as that rarest of things – a joy-bringer.

He reflects: "I didn't miss a drink since the day I was born, nor a party."

And to every party he ever attended Mick O'Toole has brought both life and soul.