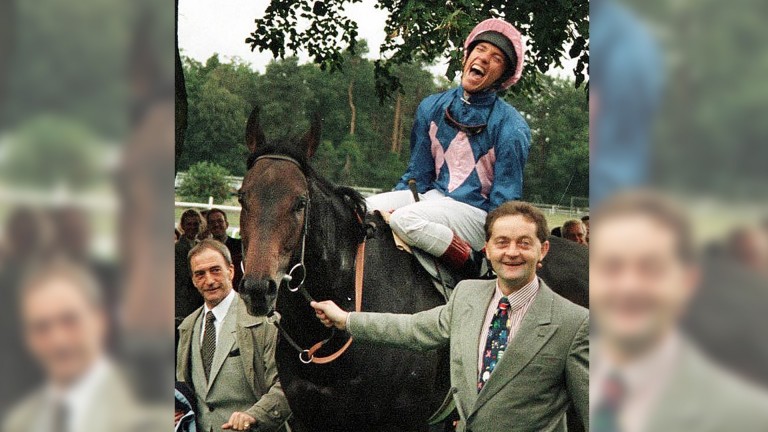 Frankie Dettori celebrates after Fujiyama Crest gave him seven winners on the Ascot card
Racing Post
1 of 1
UPDATED 10:38AM, MAY 31 2020

By the time of the closing Gordon Carter Handicap over two miles Ascot was in ferment, the crowd in an orbit of excitement and expectation and Frankie Dettori was fizzing with adrenaline.

The only folk in the country willing Frankie and Fujiyama Crest to get beat were the bookmakers. Six Dettori winners had already put them in the bed by the door, a seventh meant just one thing – outside, find a post, on with the blindfold and the merciful crack of rifles.

Dettori says: "I made my way to the paddock through loads of people clapping, cheering and patting me on the back which – being me – I loved of course.

"I said to Michael Stoute, 'If this gets beat it's your fault because I'm on fire'. But Fuji had not shown much since winning the same race the year before.

"The start is a couple of furlongs down the course and we got a standing ovation, which was awesome. I knew he had to lead, but he wasn't great out of the stalls and it seemed to take ages to get to the front although I managed to chop a couple off getting there.

"His lad Derek had warned me Fuji was getting more lazy so I knew that when I sent him on I'd have to make his mind up for him.

"So at the three-pole I gave him a couple of cracks and got after him. Past the two-pole we got to the brick wall and all I could hear was the sound of Pat Eddery's whip – whack, whack, whack.

"I am on my knees, the horse is on his knees and I'm thinking, 'We're not going to do this'. But we hung on and when I punched the air I was so knackered I nearly fell off. As for Fuji, he had given everything and pulled up in no more than two strides.

"There were people everywhere and the noise was incredible. You could smell it in the air that something crazy was happening."

The hero of the magnificent last leg was sold for £65,000 to Nicky Henderson, but he didn't think much of those hurdle things that kept getting in his way and he moved on to Roger Curtis.

In 2000, Fuji's old lad Derek spotted that the old boy was going to the sales and alerted Frankie, who bought him privately and so the last of the seven spent a highly overindulged retirement in Dettori's Stetchworth home, where he died last year.

On course at Ascot that day was William Hill boss John Brown, who recalls: "I was in the Hills box and was on to the office from the third race onwards and I distinctly remember running into you on the stairs after the fifth when you said that you hoped I'd bought a change of trousers.

"Our head of liabilities who would oversee all the hedging was on holiday and so it all fell to his number two Richard Banks – who is still at Hills – to deal with me barking down the phone.

"I have to say he did such a great job that afternoon that the following week I gave him a good bonus.

"We had shortened up through the day and the sixth winner, in particular, big time and Richard told me that despite us cutting Fujiyama Crest early on from 12-1 to 7s there had been loads of people backing him and he’d come down to 7-2 then 5-2. 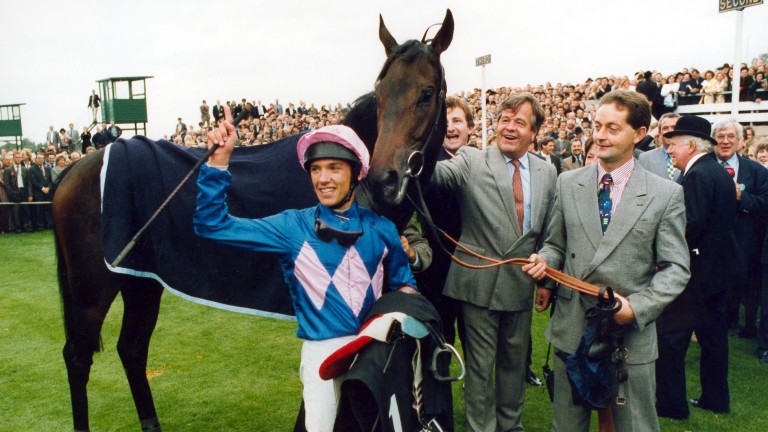 Brown, fearsome but fair to work for, has always retained that sliver of streetfighter that propelled him from tea boy to tai pan at Hills and thought the time had come for some old-fashioned measures – what the old trade unions used to call direct action.

Brown says: "I had a runner in that last race – Shooting Light. Tim Sprake was riding him and I said, 'If you get anywhere near that little shit Dettori make sure he goes over the rails! I'll pay your wages'.

"But we were behind from the start and I don't think we ever got within 50 yards of him."

So Fujiyama Crest hammered the seventh nail into the old enemy's coffin and across the nation the biggest damage assessment of recent years got under way.

Never underestimate the combined power of a lot of small punters getting it right at exactly the same moment. And while sophisticated punters might sneer, there are still many backers who, faced with ticky high-profile card, take the view 'I'll do all Frankie's in combinations'.

This was the day the mug punter drank from a golden goblet as seven unlikely chickens all came home to roost.

Brown says: "It was fantastic to be there and watch the whole day unfold, but it was going to mean massive losses and on the way home in the car I rang Bob Lambert, who was very much our big man of the money and finance side.

"I told him it was a bloody mess, Frankie had ridden seven winners and I estimated we might have lost between £8-10 million. He was staggered." 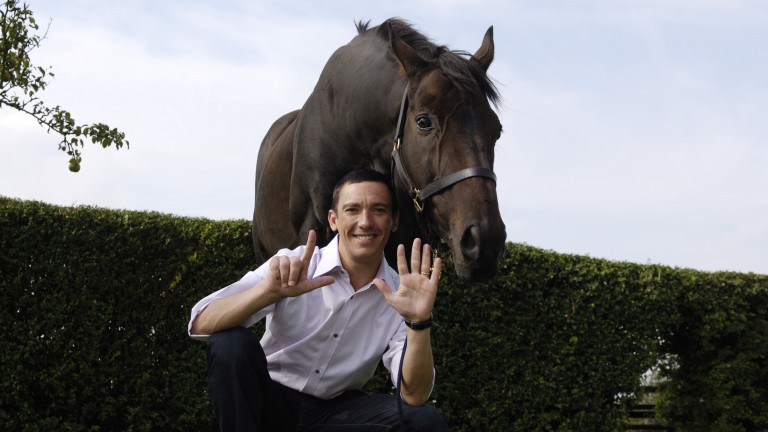 Fujiyama Crest with Frankie Dettori, who bought him privately after he went to the sales
Edward Whitaker (racingpost.com/photos)

It might have been more but for supersub liabilities wizard Banks who, now 55, is group head of racing at Hills.

He says: "The best thing was when John said that I had been right throughout the afternoon and he was wrong – he didn't say that often. He went through every trade with a fine-tooth comb and could not find a penny more we could have saved. That was worth more than any bonus."

Brown adds: "Our final loss was £8.5m. We didn't hold that sort money on deposit in those days so we put a special team together who spent all Sunday tracking down bankers and getting the cash. I did not want anyone not to be paid on Monday – we did that, but we did miss one shop in Exeter. Not a bad effort.

"And by the time our PR guru Graham Sharpe had done his stuff – which was brilliant – the whole thing hurt a lot less than it should have done."

'I managed to arrange a jazz band to welcome them back'

Sometimes every cloud turns out to have a platinum lining and so it proved within 48 hours for Hills.

Brown says: "On the Monday, two days after doing £8.5m in cold blood and having had to unlock money to pay everyone, we had a hugely important adjudication to face on the financial front.

"We'd been fighting Grand Metropolitan for money from a previous takeover after seven years of barristers and horrendous legal fees. It was D-day for what we'd get and Bob Lambert and his team were there for the result.

"We were awarded the sum of £120m. The seven-year war was worth it, and then some.

"While the lads were on their way back on the tube, I managed to arrange for a jazz band to welcome them back to the office.

"So when Bob and the lads arrived outside there we all were was this band bashing out 'We’re in the money' for all they were worth.

"At that exact moment a television crew turned up to film a piece with Graham Sharpe about the £8.5m we'd done on Frankie.

"It was a great moment and you'll never hear me singing 'I don't like Mondays'!"

FIRST PUBLISHED 2:00PM, MAY 30 2020
There were people everywhere and the noise was incredible. You could smell it in the air that something crazy was happening

'It'd be like riding the Arc winner' - Ray Cochrane back in the saddle at 63 'The zest and desire was there' - Gosden encouraged by Enable's comeback The glory goes to Ghaiyyath but Enable fans have every reason to be pleased If anyone can get Enable back on Arc track it's the genius that is John Gosden Ghaiyyath strikes in Eclipse as Enable goes down fighting at Sandown Richard Forristal: a great ride - but McNamara was allowed to do what he wanted