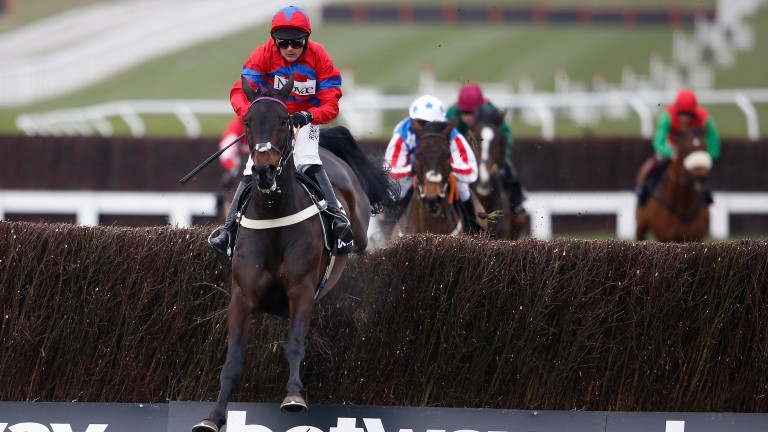 Sprinter Sacre and Nico de Boinville on the way to a famous win in the Champion Chase
Alan Crowhurst
1 of 1
UPDATED 1:00PM, MAR 14 2021

This article was first published in the Racing Post on March 17, 2016

Amid scenes unparalleled even at this old spell-weaver of a racecourse we witnessed the return of the king yesterday with Sprinter Sacre overcoming his sea of troubles to reclaim his rightful place at the very pinnacle of jump racing.

This was a victory, in magnificent defiance of the odds, which rendered the old adage 'too good to be true' forever redundant.

And, my God, how the festival faithful wallowed in the sheer wonder of it, draining the cup of joy in a vast collective 60,000-strong gulp. The potion brewed by Sprinter Sacre was heady stuff indeed and how happy Cheltenham felt to be elevated into a state of total intoxication.

I have perhaps said it before but the old hymn got it right when describing the journey Nicky Henderson and his team – and their fearsome two-miler – have travelled to this redemptive triumph.

'Through the night of doubt and sorrow, Onward goes the pilgrim band, Singing songs of expectation, Marching to the Promised Land.' Well, yesterday they reached the Promised Land and gave us all a visa to accompany them to journey's joyous end. 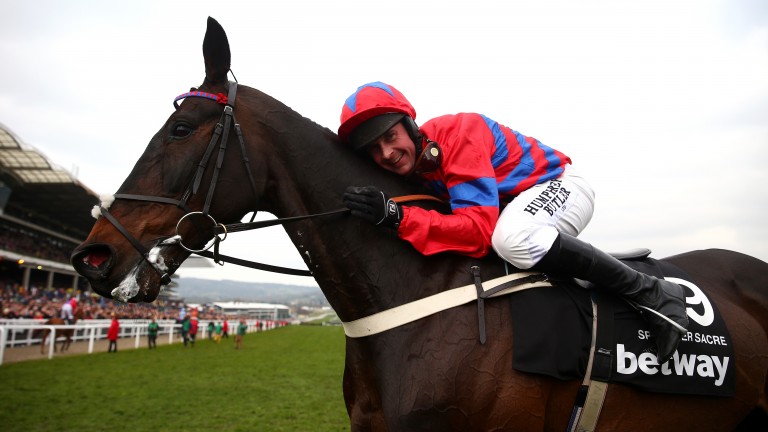 At one stage Sprinter Sacre was rated the finest two-mile chaser ever seen but that mean old judge the head told the heart that a return to the Olympian heights was surely the stuff of dreams.

And one of the joys was the way in which Nico de Boinville and Sprinter Sacre – "a terrible show-off" in the words of this trainer – put on a performance that was pure theatre.

Yet coming down the hill the outcome still hung ominously in the balance and De Boinville was scrubbing his old ally along as they ran to the last, where the 2013 champion chaser was far from fluent.

But what happened next was like the sun coming out. Suddenly Sprinter Sacre surged into the lead and we all immediately sensed the race was Seven Barrows-bound and one of Cheltenham's most momentous hours was before us.

Part of the beauty was that the heaving enclosures, watching the scarce-credible coming to life, had the time to revel in the spectacle. There was none of that looking back for challengers or the fear that something could come and destroy the dream. Sprinter Sacre was storming home with more than just an echo of his old might and pre-eminence, and how the crowd rose to the occasion. 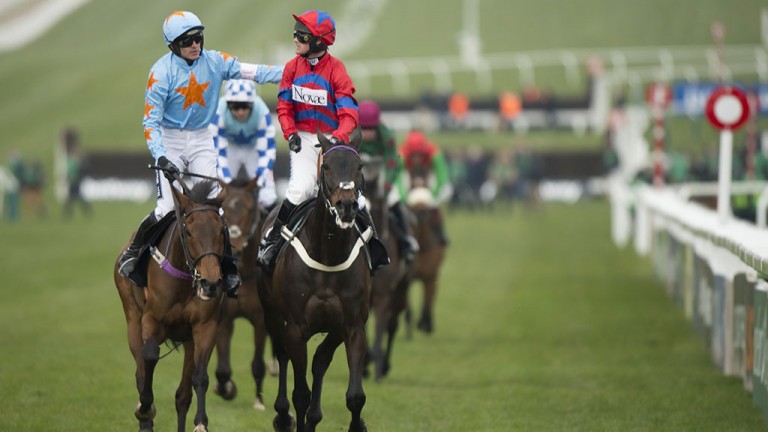 By the time he cleared the second-last it was simply bedlam as those who love this place – and the deeds it encourages – flung themselves deliriously into the spirit of the moment.

One man cannot defeat a multitude and the course commentary was simply vapourised by the clamour of noise as Sprinter came to the last. When he cleared it the blast of decibels must have shaken the ancient sentinel of Cleeve Hill to its very core.

It was a stunning moment and as De Boinville brought the patient restored to paragon back down the horsewalk there was suddenly fresh meaning to the saying 'an adoring public'.

Those who could extricate themselves from the throng made their way towards the winner's enclosure as if their life and breath depended on it.

Plenty of racegoers ran, some of us quickened our waddle, as we made our way to witness history.

The new winner's enclosure with its long, curving extra tier was built for this moment. There was not a spare inch of ground on stepping or stair and you could feel the vibe of sheer undiluted pleasure as the faithful awaited the prodigal's return.

When he strode into the bottom of the paddock to make that walk to the place he made his own three long years ago our old friend joy was indeed unconfined.

The cheers, roars and applause simply crashed out into the most epic crescendo as he came into the sacred enclosure, with De Boinville standing high in the irons and high on life.

All around you were smiles, a few well-shed tears and the hubbub of a shared experience that not a soul on course will ever forget being a part of.

This was quite simply Nicky Henderson's finest hour, surpassing all his other many achievements. Tear-stained but in seventh heaven he handled the moment with brilliance and modesty but admitted no other win had given him such pleasure.

It has been a team job at Henderson's and many a hand has lain on the tiller that has steered Sprinter Sacre back to harvest home. How he and Corky Browne, a platoon of vets, De Boinville and Sprinter's much put upon lad Sarwar Mohammed have wrought this miracle only God and they will know.

Poor Sarwar is regarded as nothing more than a tasty snack by Sprinter, who regularly takes a lump or two out of his arm. But you would not begrudge this horse of the ages a whole arm plus a second one for pudding if he fancied it.

Yesterday Cheltenham delivered one of those enriching experiences that draw us all here year on astounding year.

Sprinter Sacre must be made of sterling stuff as he has been through plenty and had the temperament, tenacity and toughness to tread a hard road. He has proved to be one for the long haul.

And while the horse is always the hero, on this occasion the trainer is the man of the hour.

For yesterday, for the improbable happy madness of an indelible afternoon, we should simply say thanks to Nicky Henderson for working something close to a miracle.

Sprinter Sacre is champion chaser once more. An equine eighth wonder of the world.

FIRST PUBLISHED 1:00PM, MAR 14 2021
It has been a team job at Henderson's and many a hand has lain on the tiller that has steered Sprinter Sacre back to harvest home

'I'm sure Champ is a Gold Cup horse - but we might have another one as well' 'He's one of the most exciting prospects we've had for a long time' 'The Tingle Creek is the first aim and the hope is that he's our next superstar' Watch: trainer Nicky Henderson discusses his Seven Barrows stable stars There's a buzz about the Flat in this jumps heartland - just ask Nicky Henderson Trevor Hemmings: I got on well with Ginger but he and I would have clashed