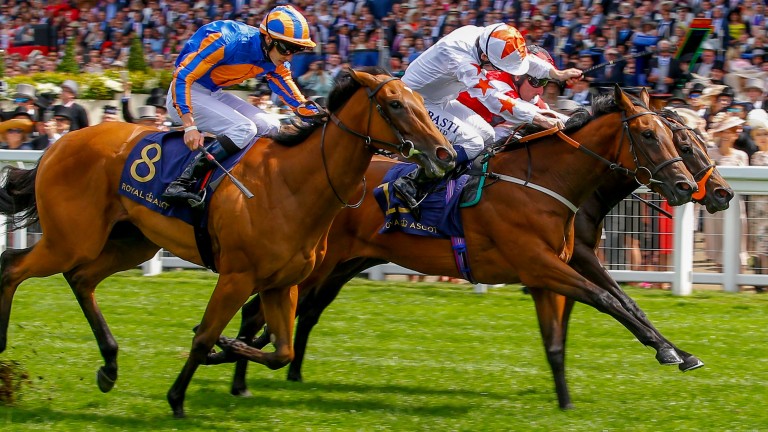 Royal Ascot winner Signora Cabello could start her campaign back at the Berkshire track next week, with Wednesday's Merriebelle Stable Commonwealth Cup Trial Stakes under consideration.

The John Quinn-trained filly, who won last year's Group 2 Queen Mary and Prix Robert Papin, features among 14 entries for the Group 3 registered as the Pavilion Stakes after connections decided to stick to sprint distances.

"She's been entered for Ascot next week and we're considering it," said Quinn. "She was phenomenal as a two-year-old, she never came up for air and had had enough by the time of the Cheveley Park, but apart from that she had a great year.

"Her best form has come over five to five and a half furlongs and she was second in a Group 1 over six [Prix Morny], so we're going down the sprinting route.

"She's never been one to burn it up at home, and you never know how they'll get on from two to three, but I'm pleased with what I see."

Phoenix Thoroughbreds bought a 75 per cent share in Signora Cabello, who is a general 25-1 shot for the Commonwealth Cup, before her victory at Royal Ascot and now have total ownership after buying her back for 900,000gns at Tattersalls in December.

As well as keeping the daughter of Camacho, Quinn has been sent a batch of well-bred two-year-olds by Phoenix, including a Frankel filly and a Camacho colt.

"We've been sent five or six with nice pedigrees, so let's hope there are some good ones among them," the trainer added.

The dual-purpose Malton trainer has another exciting sprinter among his 65-strong Flat team, with hopes El Astronaute can step up to Group races.

The six-year-old capped a hugely progressive last campaign with a deserved first Listed success at Maisons-Laffitte in October and returned with a second-placed finish at Musselburgh this month.

"He was just touched off on his comeback with a penalty and we were very pleased with him," said Quinn. "He'll head for the Palace House at Newmarket next Saturday and we're looking forward to running him."

Cheltenham, Aintree - and now Ascot? De Bromhead adds filly to Coronation mix A top on-course bookie on the horses he's out to get on day one at Royal Ascot Tracks set for more pain after June 21 with likely delay on restrictions easing 'Very vociferous' Stradivarius ready to rumble - but Gosden fears Subjectivist Foot abscess forces Royal Ascot favourite Bay Bridge out of King Edward VII 'She has an outstanding chance' - Mark Johnston and others on their top hopes