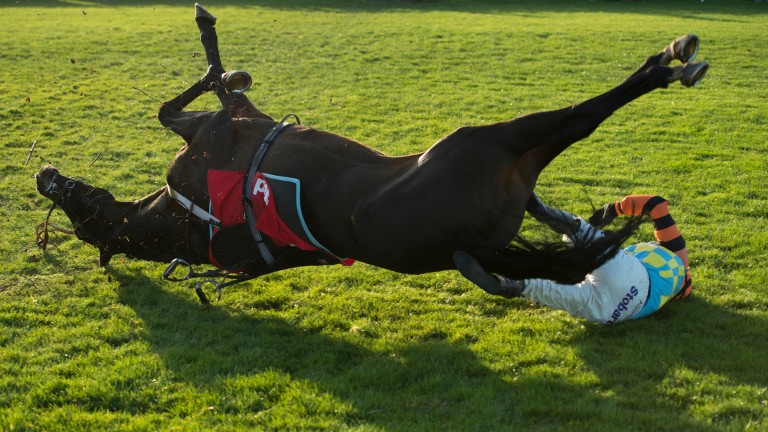 Daryl Jacob is left with no chance of staying aboard Might Bite at the final fence of the Kauto Star Novices' Chase. Horse and jockey walked away from the fall
Edward Whitaker
1 of 1
5:51PM, DEC 26 2016

Kauto Star was a truly wonderful racehorse, but if he had one fault it was he did have a penchant for arriving at the final fence with a race in the bag only to make a rather nasty blunder.

That being the case, the decision taken four years ago to rename the Feltham Novices' Chase in his honour proved, on this particular day, to have been inspired.

That's because but for making an error of monumental proportions at the final fence of this season's 32Red Kauto Star Novices' Chase, Might Bite very definitely would have won.

Yet having almost completely failed to take off, Daryl Jacob's mount crashed to the ground, throwing away a huge lead and certain victory, to the benefit of a trainer who had come to Kempton expecting to land a major prize.

But not this one.

Indeed, Royal Vacation, carrying the Cue Card colours of Jean Bishop and with Paddy Brennan on his back, was returned the 33-1 winner of a contest in which only four finished. The 12-length second Virgilio, Amore Alato and Present Man were the only others to complete a Grade 1 feature in which Frodon also came down at the last fence and 3-1 favourite Anibale Fly was pulled up a mile from home.

"Never in doubt," said Tizzard when asked how Brennan had summed up the triumph. Then he chuckled. In relaying what had just happened he chuckled a lot.

"When we decided to go for the King George with Thistlecrack, I thought, what can I run in this race?" he said. The answer was Royal Vacation.

"This horse has a lot of experience and I knew he wouldn't stop," added the trainer, who is now, to his own surprise, eyeing the RSA Chase.

"He's having a blow, but then he's just won a Grade 1. I suppose we'll go to Cheltenham now with one more run before the three-miler. I didn't think I would ever be saying that!" 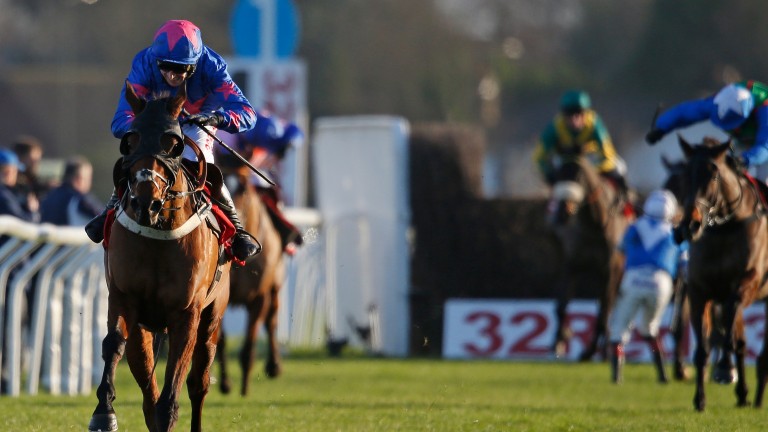 Royal Vacation: fancied for the RSA Chase
Alan Crowhurst
Virgilio's rider Harry Skelton described himself as "absolutely delighted" with his mount, but Might Bite's trainer Nicky Henderson, whose Caracci Apache broke down and was pulled up on the first circuit, was left to reflect on what might have been.

"Might Bite jumped beautifully the whole way but then just seemed to take his eye off the fence for a second," he said of the seven-year-old, who was immediately back on his feet.

Then, seeking an explanation, he added: "There were a lot of people, cameras and so on. He's a spooky devil at the best of times."

For a moment, that spooky devil was on the verge of the best of times. Then, most regrettably, he did a Kauto Star in the Kauto Star.

FIRST PUBLISHED 2:44PM, DEC 26 2016
When we decided to go for the King George with Thistlecrack, I thought, what can I run in this race?