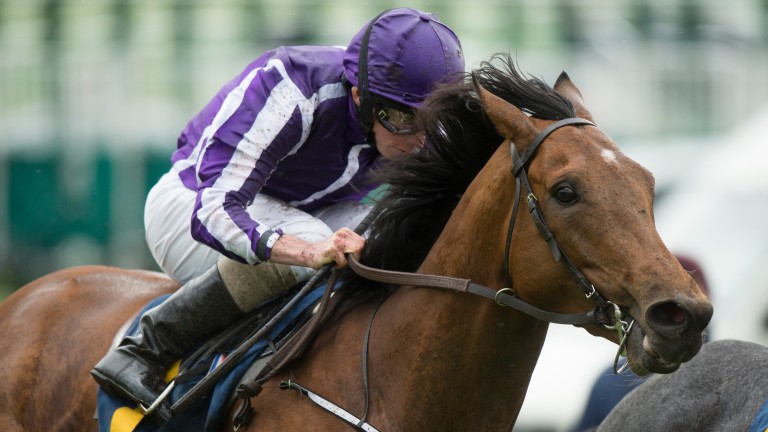 Sir Isaac Newton: won three races in his career
Edward Whitaker (racingpost.com/photos)
1 of 1
By James Stevens 10:16AM, MAY 5 2020

Sir Isaac Newton, the 2016 Wolferton Handicap winner at Royal Ascot, suffered a fatal injury when falling at the last in a maiden hurdle in Australia on Tuesday.

The son of Galileo and leading broodmare Shastye cost 3.6 million guineas as a yearling when bought by Coolmore in 2013. He was a full brother to Oaks runner-up Secret Gesture while his younger siblings, Juddmonte International winner Japan, and Mogul, a leading fancy in this year's Derby, have flourished.

Sir Isaac Newton never quite lived up to his lofty reputation despite wins at Royal Ascot and in the Group 3 Finlay Volvo International Stakes for the Aidan O'Brien team before being sold to Australia asa Cups contender.

He had failed to sparkle down under on the Flat for leading owner Lloyd Williams and was sent hurdling. Making his second start in that sphere on Tuesday, in Warrnambool's Carlton Draught Maiden Hurdle, he was running a big race and leading before suffering the fall over the final obstacle. Inayforhay went on to win.

Steve Pateman, riding Sir Isaac Newton, was concussed after the fall and was taken to hospital.

May resumption for racing confirmed in Czech Republic and Hungary

FIRST PUBLISHED 10:16AM, MAY 5 2020
Sir Isaac Newton never quite lived up to his lofty reputation despite wins at Royal Ascot and in the Group 3 Finlay Volvo International Stakes