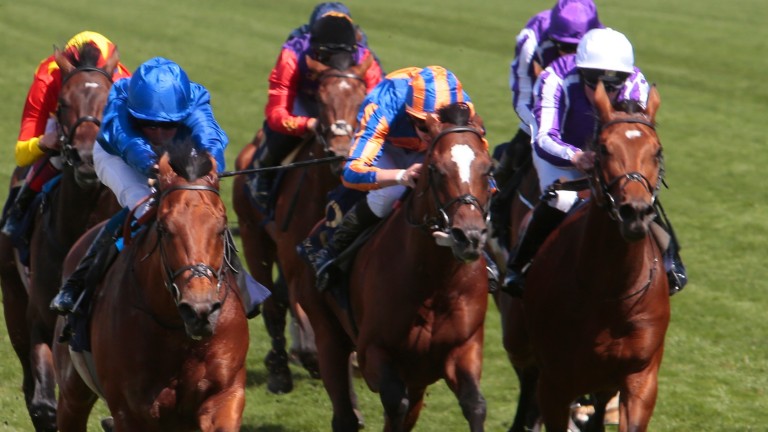 King Edward VII Stakes winner Old Persian will be rested in preparation for an autumn campaign that could include a step up in trip for the William Hill St Leger after finishing a respectable sixth behind Latrobe in Saturday's Dubai Duty Free Irish Derby.

Charlie Appleby said: "The Irish Derby was a muddling sort of race and, whereas we got the rub of the green at Royal Ascot, it didn't unfold as we expected it to at the Curragh.

"I felt that he lost nothing in defeat, bearing in mind the unfortunate position we were in after the first half mile, where we were a bit far out of our ground.

"He's come back from Ireland fine and deserves a little bit of a break now. We'll enter him in the Voltigeur and the St Leger.

"In the King Edward we saw that he was doing his best work in the last couple of hundred yards, where he was starting to pull away from the field again.

"He's not a quickener, he's a lengthener, so everything points to a step up in trip potentially suiting.

"We'll see what happens in the Voltigeur. If he can be competitive in that then it'll give us a better indication regarding the St Leger."

Since the weekend Paddy Power and BetVictor have pushed out Old Persian to 20-1 for the St Leger, but he remains as short as 12-1 in a place.

FIRST PUBLISHED 1:37PM, JUL 3 2018
He's not a quickener, he's a lengthener, so everything points to a step up in trip potentially suiting

Doyle Force: Creative rider off the mark for the week as Appleby bags a 1-2 'He's a horse we like a lot' - Roger Varian could hold key to big-field handicap Mohaafeth bidding for redemption for William Haggas after late Derby withdrawal 'Challenging horse' Kemari solves his trickiness puzzle with impressive success Can one-of-a-kind Jim Bolger pull off more Group 1 heroics with Poetic Flare? One trainer, one jockey, one horse and one race to note on Royal Ascot day one