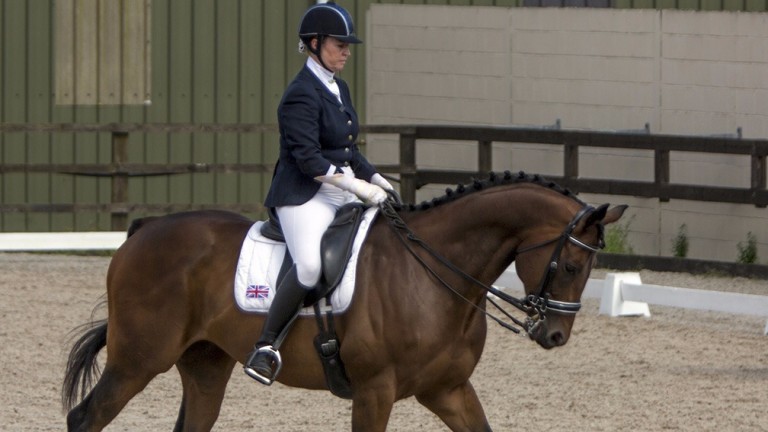 Namibian, you remember him. The winning favourite in the 2011 Queen's Vase at Royal Ascot. Trained by Mark Johnston. The one who went on to land the Gordon Stakes before a serious bout of colic after finishing fifth in the Great Voltigeur prompted a switch to hurdles.

Jumping may not have been for him - he completed just one of his two starts for John Ferguson - but dressage, and para-dressage at that, most certainly is. Little more than a year after venturing out on his new path, the eight-year-old has qualified for the 2017 Para Dressage Winter Championships in March.

Namibian is now ridden by Lincolnshire-based para-dressage rider Julie Frizzell, a former wing commander who served for 20 years in the RAF before her retirement in 2008 after a fall from a horse on an army course resulted in the removal of her ulna. She now rides with a thermoplastic cast to keep her hand in place.

Frizzell acquired Namibian in 2015, through the Godolphin re-homing programme, and said: "To come from racing and turn to dressage is one thing, to turn to para-dressage is another.

"At the outset I can liken it only to trying to get the QEII yacht to waltz! However, his ability and train-ability are superb. He is the most intelligent horse I've ever sat on.

"I'd call him an impatient learner. He does occasionally lose the plot if he doesn't understand something immediately. It's like he wants to be at the top of his game, irrespective of what the game is. He's a proper diva, loves attention and is truly happy when he's working. I swear this horse smiles."

Namibian started competing only in March but was a natural and has never finished outside the top four in any of his tests, and Frizzell continued: "In terms of preparation for the Winter Championships, with qualifiers few and far between, my aim was to try to get him qualified as early as possible. But to have achieved that by November from just three shows was, to be honest, a bit of a pleasant surprise!

"Developing him up to advanced dressage level is ambitious, but I'm in no doubt he has the brain and athleticism to do it."