News ON THE SIDELINES 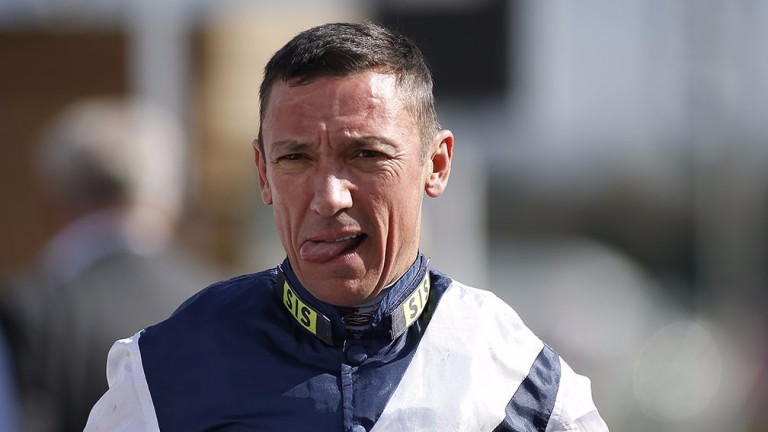 Frankie Dettori will miss the entire five days of Royal Ascot due to a persistent arm injury suffered at Yarmouth last week.

After riding Shutter Speed in the Group 1 Prix de Diane at Chantilly on Sunday, Dettori is suffering pain in his arm and requires physio.

Dettori said: "I've been trying so hard to get fit for today but had to accept this morning it wasn't going to happen.

"I've got to have physio and get it properly looked after so won't be at Ascot this week. For me that's soul destroying as it's the most important week of the year.

"I'll be counting down the days until next year."

As well as the intended rides on Lady Aurelia, American Patriot and Nootka Sound on Tuesday, Dettori was also booked to partner Denaar, who will now be ridden by Pat Smullen, in the Coventry.

Wesley Ward, trainer of Lady Aurelia, said: "It's a huge disappointment that Frankie is out - the news was all of a sudden and it's a bit of a blow.

"John will take over on Lady Aurelia and knows her well. It was a toss up beforehand between the two riders after her last win - we went with Frankie - but I'm sure John will now be elated to have the ride.

"Lady Aurelia couldn't be in better form - we're excited to see her run."

John Gosden added: "It's very disappointing that Frankie can't ride at Ascot as he loves the place but he's in too much pain. He was very brave and rode Shutter Speed in France on Sunday but has been in a lot of pain since. It's real bad luck.

"I don't know what I'm going to do about jockeys for the rest of the week as I've yet to sort it out."

James Doyle will take over from Dettori aboard Magical Memory in the Diamond Jubilee Stakes on Saturday, while Jamie Spencer has picked up the mount on Royal Hunt Cup market principal El Vip on Wednesday, with Luke Morris on board Spencer's original ride Banksea.

Clerk of the course Chris Stickels said: "Frankie is synonymous with racing here so it's a real shame that he won't be riding here this week, but we wish him a speedy recovery."

Betfred and Paddy Power are both refunding all bets on Dettori to win the top jockey prize.

One of the most exciting horses on show at the meeting this year, the Wesley Ward-trained filly left a long-lasting impression at the fixture 12 months ago when destroying the Queen Mary field by seven lengths.

John Velazquez was aboard Lady Aurelia when she won at Keeneland in April, and Ward has already confirmed he will step in to take the ride.

One of the leading fancies for last season's Derby, Ulysses appeared to have trained on well when winning the Gordon Richards Stakes at Sandown on his seasonal reappearance.

Dettori was not aboard that day, with Andrea Atzeni in the plate, but he is booked for Decorated Knight, while Ryan Moore, who has ridden Ulysses twice, is on Highland Reel.

Champion jockey Jim Crowley has been confirmed as the beneficiary to partner Sir Michael Stoute's stable star, who is second favourite for the Group 1 event on Wednesday.

Michael Bell's globetrotting stayer has had a variety of partners, but Dettori has had the ride on the last two occasions, most recently when winning the Henry II Stakes at Sandown.

Jamie Spencer and Tom Queally have ridden the six-year-old 16 times between themselves, but both have rides for the Gold Cup, with Spencer aboard Quest For More, while Queally is on Prince Of Arran - so James Doyle has picked up the plum ride.

Michael Bell (@MikeBellRacing) tweeted: "So sad to hear Frankie Dettori is out of action, have called upon super sub James Doyle for Big Orange on Thursday!"

FIRST PUBLISHED 8:03AM, JUN 20 2017
I've been trying so hard to get fit for today but had to accept this morning it wasn't going to happen

'It's too easy to go into every battle. You won't win the Arc that way' Mark Crehan gets backing of Stoute and Dettori following 28-day Doncaster ban Clive Cox contemplating Glorious Goodwood bid after Caturra comes good