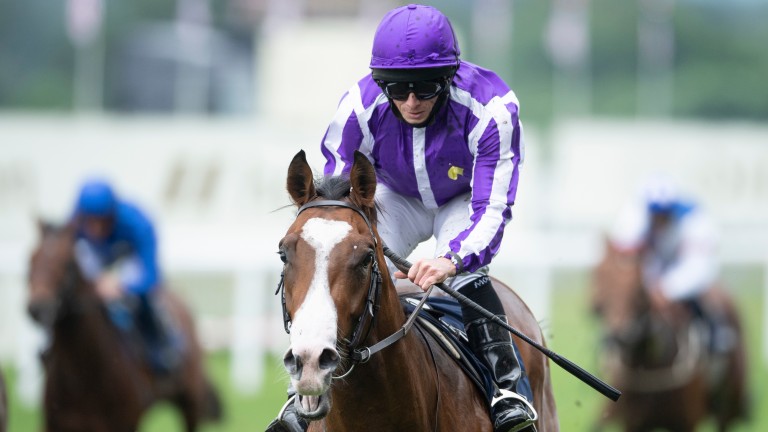 It was never going to be pretty following the record levels of rain that fell at Royal Ascot on Friday and Point Lonsdale showed an attitude to match the tough conditions to provide Aidan O'Brien with a sixth victory in this Listed race.

Confidence was high in the well-backed 10-11 favourite, but he was forced to dig deep to deny Reach For The Moon, who came close to registering a popular success for the Queen as she made her first on-course appearance of the week.

O'Brien had been out of luck with his two-year-olds during the previous four days, but may have a potential Classic star with the Australia colt, who was cut to 12-1 favourite (from 16) for next year's 2,000 Guineas and 8-1 favourite (from 10) for the Derby with William Hill.

O'Brien, whose past Chesham winners include subsequent English and Irish 2,000 Guineas hero Churchill, said: "He was very brave, as it's only his second start and I was worried about the ground.

"It was nice to get a bit of a lead today and the first two pulled clear of the third horse, so they're probably good colts.

"He was working like a very good colt from an early stage. Everything came naturally to him and we were excited about him. I imagine, if everything goes well, he could be a Guineas/Derby horse with his pedigree."

O'Brien added: "I think there are a few races in Ireland for him. The National Stakes or the Dewhurst and all those races are all open to him, depending on where the lads want to go."

Reach For The Moon raced away from the main group on the far side under Frankie Dettori and still had the lead entering the final furlong.

Point Lonsdale took some stoking up from Ryan Moore to mount his challenge before wearing down the leader in the closing stages to score by half a length.

Third-placed Great Max was a further three and a quarter lengths back in third.

A brother of Hardwicke runner-up Broome and ridden out by former jockey Rachel Richardson at home, Point Lonsdale won emphatically on his debut at the Curragh on yielding ground and could be even more potent on a sounder surface. 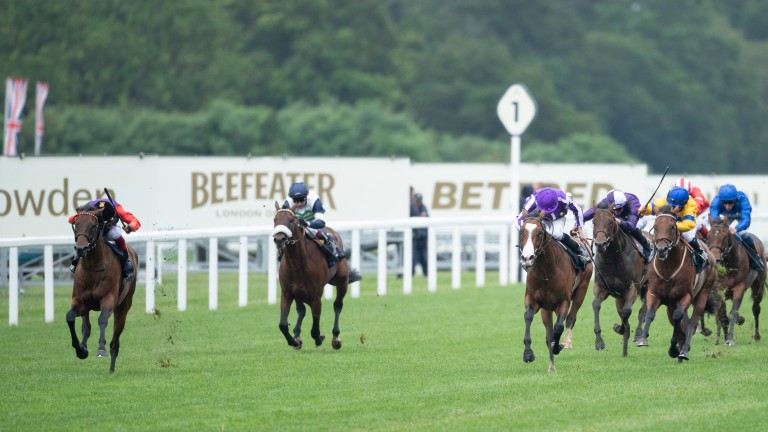 "We're glad he handled the ground as well as he did and there's no doubt good ground is better for him," said O'Brien.

"We worried about it because his brother bends his knee a bit, but this horse doesn't – he's a very low and slick mover. He has a big, long action.

"He more or less nearly made the running on the first day so probably didn't learn too much. He's a typical Australia, full of that Galileo bravery."

Agreeing with O'Brien's assessment, Moore added: "He was green and was still learning. It was very attritional conditions and he was doing this through pure class. He doesn't need this ground, he just handles it."

Dettori was suspended for two days (July 4-5) for using his whip above the permitted level from two furlongs out on Reach For The Moon.

FIRST PUBLISHED 2:38PM, JUN 19 2021
He was working like a very good colt from an early stage. Everything came naturally to him and we were excited about him

'Horses make a fool of you' - Angel Bleu makes quick reappearance a winning one First Group 1 for Alan King as Trueshan relishes conditions in Goodwood Cup 'She's very much the matriarch' - You'resothrilling a true blue hen for Coolmore 'The more rain the better for Trueshan' - trainer quotes on the Group 1 Kings and queens of Ascot can illuminate the galleries on racing's day to shine Can Aidan O'Brien land his eighth Tyros Stakes in a row with Point Lonsdale?