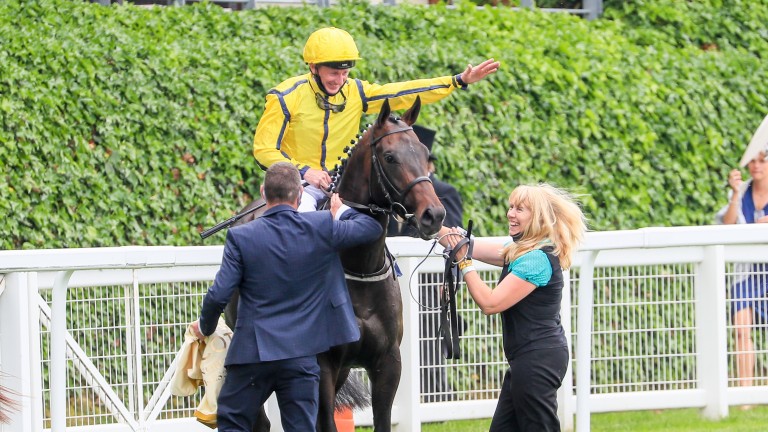 Paul Hanagan celebrates after winning the Norfolk on Perfect Power
Mark Cranham (racingpost.com/photos)
1 of 1
By Scott Burton UPDATED 8:05AM, JUN 18 2021

Perfect Power produced an emotional victory for Paul Hanagan and his longtime ally Richard Fahey when getting the best of a frantic finish to the Norfolk Stakes.

The field split into two groups and there was little in it at the line but Hanagan just got the decision on the son of Ardad, ahead of the well-supported Go Bears Go – the leading pair split by the width of the track – and the fast-finishing Project Dante.

Hanagan feared his career might be over following a serious back injury in February 2020 and after his number was called by the judge he said: "I don't usually get emotional but I'm lucky to be here at all after the accident. It’s just an amazing feeling, just to get back here, never mind a winner at Royal Ascot.

"I fractured my back in three places after a fall at Newcastle and it was touch and go whether I was going to be back. I owe so much to the Injured Jockeys Fund and Jack Berry House at Malton. My family and obviously Richard Fahey has been amazing along with my agent Richard Hales and everyone at the yard."

Fahey was understandably delighted for Hanagan, having been the primary force behind his drive to the apprentice title in 2002 and the champion jockey crowns of 2010 and 2011.

Fahey said: "It's a special moment for everyone. This has been a bit of a bogey race and we've been second at least three times. When they flashed past the post I thought we'd got beat. I was emotional for about two seconds so I must be getting soft in my old age. 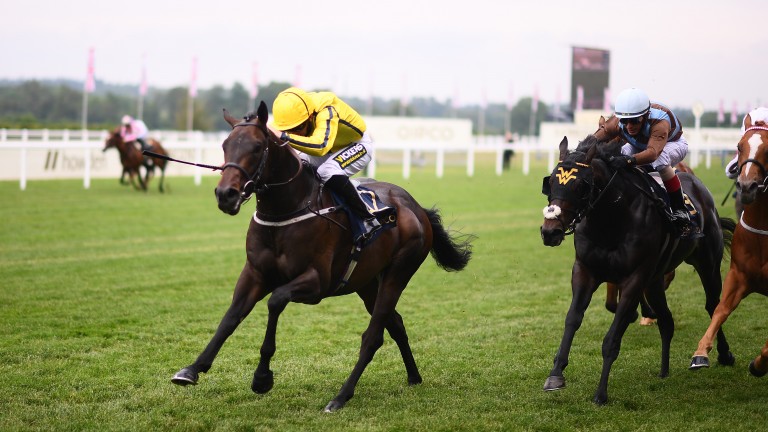 "As a team Paul and I have been together for a long time. We had a little holiday but he came back and he's been with me 18 years."

Perfect Power only arrived with Fahey at the end of April after being "bought to win the Norfolk" for Sheikh Rashid Dalmook Al Maktoum at Goffs in Doncaster.

"He came out of Tally Ho Stud at the breeze-up and we haven't had him that long so Roger O'Callaghan has to take a bit of credit," said Fahey.

"We took him up on the grass and he destroyed some of my two-year-olds. We were a little bit unlucky first time but we were quietly confident he'd run a big race."

Fahey said a step up to six furlongs was on the cards for Perfect Power, who had a head and a nose in hand over his nearest two rivals, while only a length separated the first five home.

Instinctive Move was withdrawn by the starter after becoming restless in the stalls, leaving Derby-winning jockey Adam Kirby standing up in the gate and facing the wrong way but with no horse under him.

Less than 24 hours on from saddling the 1-2 in the Windsor Castle, David Loughnane missed out by just a head with Go Bears Go.

"If we were drawn the other side I think we would have won," said Loughnane. "He just does what he has to do and he had his race won on that side.

"You can't be disappointed with a run like that, it's the highs and lows of racing. It was a huge run and I think we've got an awful lot to look forward to.

"I think he'll be more effective over six and he's entered in the Phoenix Stakes at the Curragh."

FIRST PUBLISHED 2:41PM, JUN 17 2021
I fractured my back in three places after a fall at Newcastle and it was touch and go whether I was going to be back