Our experts provide their eyecatcher from the Coventry Stakes 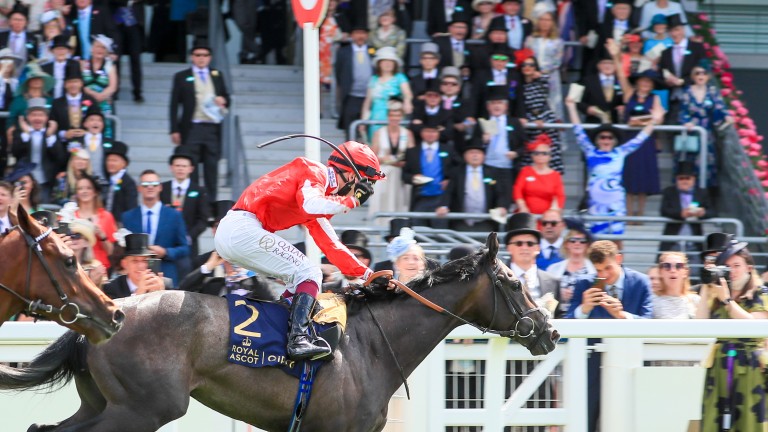 Berkshire Shadow triumphed in the Coventry, but who caught the eyes of our experts?
Mark Cranham (racingpost.com/photos)
1 of 1
UPDATED 4:21PM, JUN 15 2021

I'd wanted to get involved on Ebro River given how good he'd looked in previous starts, but was put off by some quirks he'd displayed which led to concerns he might boil over on the big day.

It was great to see those fears were unfounded, and what actually compromised his chance was being drawn in stall one, with those holding high numbers coming to the fore.

With a furlong to run Ebro River had come to the front, down the centre of the track, but in the final stages those closer to the rail rushed home. Had he been in the mix on the stands' side I think he would have got closer, and I'd be interested to see if Berkshire Shadow can confirm the form.
David Baxter, Juvenile Judge

'He shaped better than the result in ninth'

I thought The Acropolis shaped better than the result in ninth for Aidan O’Brien. The son of Chesham Stakes winner Churchill was hampered by Ebro River, who drifted towards the stands’ side, entering the final furlong and was not hard ridden by Ryan Moore when his chance disappeared.

He looks a type to continue improving throughout the season, as most juveniles in his stable tend to. It wouldn’t be a surprise if he took up his engagement in the Railway Stakes in 11 days time and produced a much better finishing effort.
Robbie Wilders, tipster

'It didn't strike me as a particularly deep edition'

You can mark up any horse who raced on the far side, and the horse who emerged best from that particular group was Eldrickjones.

The Nick Bradley Racing-owned colt was among the backmarkers entering the closing stages but fought his way through to be second best.

That said, I think you can temper your enthusiasm when it comes to this year's Coventry as although the winner was very dominant, it didn't strike me as a particularly deep edition.
Maddy Playle, RPTV

FIRST PUBLISHED 4:14PM, JUN 15 2021
With a furlong to run Ebro River had come to the front, down the centre of the track, but in the final stages those closer to the rail rushed home