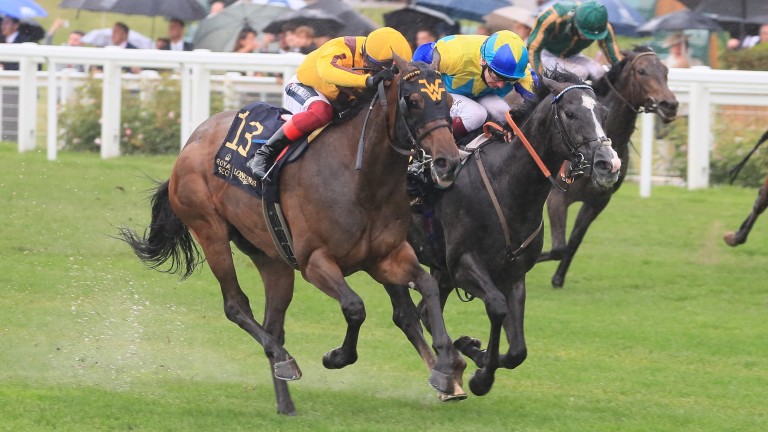 Your heart goes out to Archie Watson and owner Yoshiro Kubota after Dragon Symbol lost the race in the stewards' room, as Group 1s such as this can change lives and careers. But the rules of racing are there to ensure that every participant gets a fair crack and I have little doubt that Campanelle's chance of winning was seriously compromised.

The parallel universe where both horses ran straight and there was no contact does not exist and in this case the Ascot stewards have taken a broader interpretation of Britain's rules – which naturally favour the first past the post – and decided that the aggressor could not have been certain to have won without the foul. That seems naturally just.

That's not to say an appeal by the demoted team has no chance of success and Watson did get a demotion in France overturned in 2018.
Scott Burton, reporter

'The stewards got it right'

I think the stewards got it right as Dragon Symbol had dragged Campanelle so far across the track and the American filly must have lost a few lengths in the process.

The only thing I would say is she did look like she might have been getting the better of the Archie Watson-trained colt in the final yards only for that one to nose ahead again.

Maybe he would have finished in front if they had both run straight, but I'm afraid Oisin Murphy has to be stronger in those situations – if you allow your mount to wander you can end up paying a pretty hefty penalty.
James Hill, tipster

Dragon Symbol has more to offer

Others will know more about the rules than me, but whatever the granular detail says it should be that these decisions are determined based on the race that took place that day. On those terms, I think the right decision was reached. Campanelle would have won the Commonwealth Cup without the interference from Dragon Symbol.

That said, I agree with those who think Dragon Symbol is the better horse and would put him in at a shorter price should they meet again. The way he kept on showed a horse with more to offer and he is not in need of the mud, for all what his last couple of starts might suggest.
Keith Melrose, betting editor

FIRST PUBLISHED 5:41PM, JUN 18 2021
I agree with those who think Dragon Symbol is the better horse and would put him in at a shorter price should they meet again

Charlie Appleby outlines plans for top three-year-olds Adayar and Hurricane Lane 'We love you Hollie' screamed a racegoer - and Goodwood Cup day needed her Oisin Murphy to bid for Arc history on star Japanese mare Chrono Genesis The King George was great but this Saturday at Ascot is far more important Forgive the gushing enthusiasm but I feel like I have seen something special Who is better - Hurricane Lane or Adayar? Our experts have their say