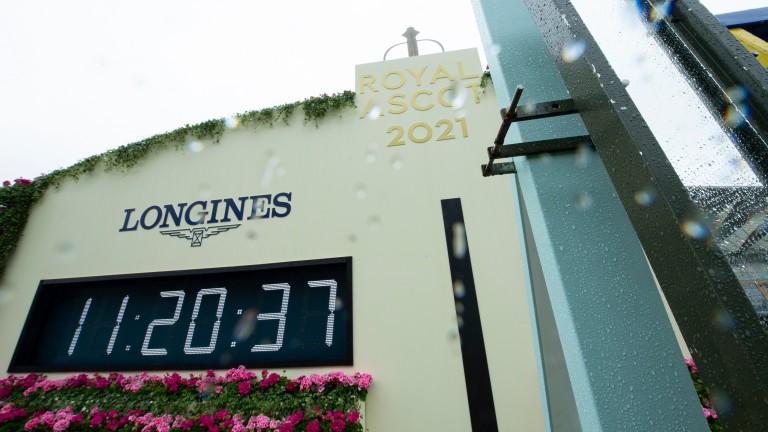 Raining at Royal Ascot: the weather has wreaked havoc on Friday, with the going now soft, heavy in places
Edward Whitaker (racingpost.com/photos)
1 of 1
By Richard Birch UPDATED 1:51PM, JUN 18 2021

Often in racing you will hear people say "a good horse can go on any ground". It is, of course, utter nonsense.

The ground is one of the biggest determinants of a horse's chance – perhaps the biggest – and the rapid softening of the Ascot surface presents a dilemma for punters.

Do you stick with your original fancies or make rapid revisions because of the change in underfoot conditions?

Here's a guide to those market principals who may or may not be suited by the ground, officially soft, heavy in places, on Friday's card, which passed an inspection.

Bear in mind for the future that many of those who would not have been suited by conditions will already have been announced as non-runners.

Warm favourite Flotus sluiced through the Goodwood mud to score by nearly five lengths on her debut. She looks sure to appreciate conditions.

Hello You graduates from a Wolverhampton all-weather win, but has Pivotal in her breeding which suggests she may enjoy soft ground.

Eve Lodge, a winner on soft at Lingfield, was withdrawn from an engagement at Ascot two days ago on account of "unsuitable ground" – it was lightning quick at the time.

Gear Up is guaranteed to relish a test in the mud. He won the Group 1 Criterium de Saint-Cloud on heavy last October, and could get firmly back on track now that he has suitable conditions again.

Alenquer won on soft ground at Newbury on his debut last August, while Yibir also possesses easy-ground form in the book.

The market has reacted sharply towards those who act on soft ground. Suesa simply relishes deep ground as her four Chantilly wins suggest.

Campanelle may be effective on fast terrain, but she also has a soft-ground win to her name in the Group 1 Prix Morny at Deauville.

Dragon Symbol, a fast-improving sprinter, was second to Rohaan on heavy at Haydock last time.

Mother Earth is fully effective on soft ground as her last-time-out Group 1 second to Coeursamba at Longchamp confirms.

Empress Josephine clearly relished deep mud when getting the better of stablemate Joan Of Arc by a short head in the Irish 1,000 Guineas.

Samoot, on the other hand, is unproven on soft ground, and it's hard to gauge whether she will enjoy this sort of test.

Friendly produced a career-best performance when sixth in the Irish 1,000 Guineas last time out, and it could well be that soft or heavy ground is important to her.

Cut in the ground is important to Win O'Clock, and the rain has come just in time for Roger Charlton's likeable handicapper. He's a prime example of a horse whose chance has been significantly enhanced by the overnight downpour.

Tritonic has won on soft ground over the Ascot hurdles track, while Quickthorn bolted up on his Haydock reappearance on good to soft.

Mo Celita, who chases a six-timer, is particularly well served by plenty of cut underfoot as demonstrated by a Haydock heavy-ground win two starts ago.

Dream Composer is another confirmed easy-ground performer, but conditions are an unknown for Boomshalaa who chases a hat-trick.

FIRST PUBLISHED 11:15AM, JUN 18 2021
Do you stick with your original fancies or make rapid revisions because of the change in underfoot conditions?