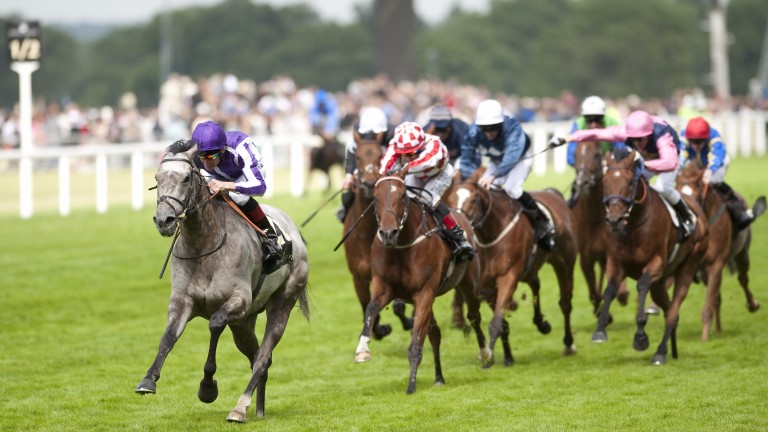 Laddies Poker Two (Johnny Murtagh) lands a huge gamble in style in the Wokingham
Edward Whitaker
1 of 1
By Graham Dench UPDATED 10:26AM, JUN 13 2019

Our Royal Ascot countdown series continues with a look back to the 2010 Wokingham Stakes, which featured one of the biggest recent gambles of the meeting

Only those in the know had the long absent Laddies Poker Two on their radar when the weights for the 2010 Wokingham were published, and she was still freely available at 25-1 at the start of Royal Ascot week.

Then all hell broke loose. The market started to move and suddenly everyone wanted a piece of the action, encouraged no doubt by the fact that Laddies Poker Two was racing for 'the lads' – Derrrick Smith, Michael Tabor and John Magnier – and was in the more than capable hands of Jeremy Noseda and John Magnier.

By the time the starter pressed the button she was down to 9-2, but her backers had very little to worry about once it was clear the stands' side group were at no disadvantage. She travelled well throughout and the race was as good as over as soon as Johnny Murtagh angled her out to challenge.

Laddies Poker Two scored by two and a half lengths – a wide margin for a race like the Wokingham – in a new track record, recording a time 0.30 seconds quicker than Starspangledbanner in the Golden Jubilee 35 minutes earlier.

Noseda recalls: "Laddies Poker Too was fragile and difficult to train, but she had huge talent. After she was injured on her final start at three we laid her out for the 2009 Wokingham, and it was always the plan to go there without a run beforehand so as not to give the game away.

"We always thought it was the race for her, but unfortunately she had a setback and so we had to wait a whole year before trying again, when all of the same things applied. That summer I also had Fleeting Spirit, and she ran very well in fourth from a bad draw in the Golden Jubilee. At that time Laddies Poker was most probably better than her.

"It was a big day for us all, getting it right after what turned out an extended amount of time, and it was more than satisfying for everyone concerned."

Laddies Poker Two was never seen on the racecourse again, but we certainly hadn't heard the last of her. She is the dam of Winter, who next Friday bids to emulate Attraction by adding the Coronation Stakes to her two Guineas wins.

FIRST PUBLISHED 10:06AM, JUN 13 2019
Fleeting Spirit ran very well in fourth from a bad draw in the Golden Jubilee and at that time Laddies Poker was most probably better than her