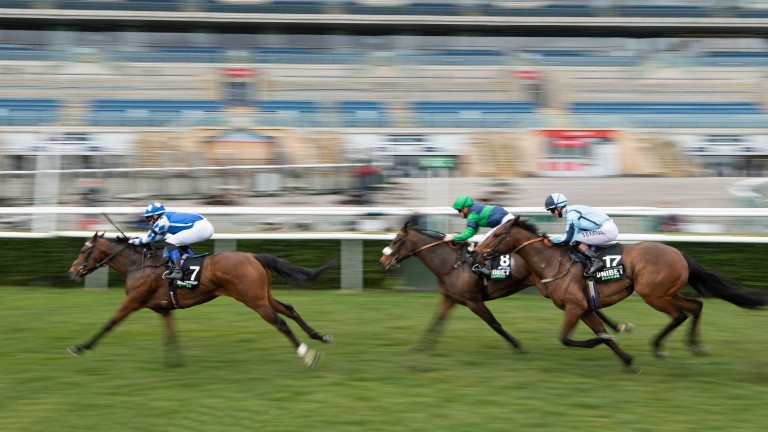 Haqeeqy: Lincoln winner is among the favourites for the Royal Hunt Cup
Edward Whitaker (racingpost.com/photos)
1 of 1
By Richard Birch and Maddy Playle UPDATED 9:17AM, JUN 16 2021

A natural inclination to favour those drawn high on Ascot's straight course is backed up by recent Royal Hunt Cup winners and also the result of the Victoria Cup last month.

The last four winners of this historic cavalry charge have come from stalls 11, 21, 22 and 26 respectively while evidence from the 7f Victoria Cup is even more overwhelming.

Taking into account the fact that five of the last six Royal Hunt Cup winners have been aged four, the claims of Haqeeqy (21), Astro King (27), Magical Morning (26), Brunch (25), Grove Ferry (30) and Matthew Flinders (15) are there for all to see. 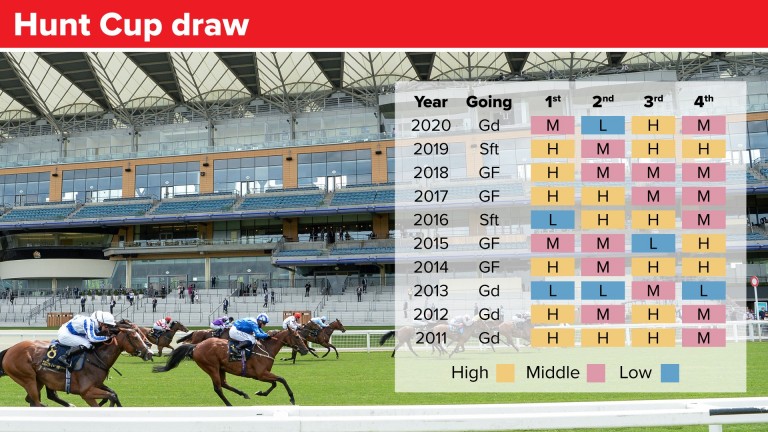 John Gosden may recently have been bemoaning his lack of three-year-old talent, but his firepower in the older-horse department is certainly explosive.

Haqeeqy, smooth conqueror of Brunch in the Lincoln in March, has long looked a natural type for the demands of this race, but he didn't please everyone with his demeanour when a beaten 5-4 favourite behind Oh This Is Us at Ascot the following month.

Brunch gave Haqeeqy 7lb that day, and now receives 3lb from his conqueror, a significant turnaround for a length and a half beating.

The Michael Dods-trained Brunch, who enjoyed success at York's Ebor meeting last August when beating Hartswood in a valuable handicap, remains open to a bit more improvement on only the 12th start of his career, and looks primed to go very close.

That comment applies equally to the Sir Michael Stoute-trained Astro King, winner of three of his six starts to date, and still firmly on the upgrade.

He wasn't seen to best effect in the Thirsk Hunt Cup last time, having navigated a wide passage throughout, and is just the type with which his trainer excels.
Race analysis by Richard Birch

If ever there was a case of a horse just bumping into one, it certainly happened to Finest Sound over this course and distance in the Britannia last year.

Under a 5lb penalty, he was extremely well backed into 11-4 favouritism but could only finish second to runaway winner Khaloosy. There was a further four lengths back to the third horse.

He only ran twice afterwards last season without winning, but, like last year, he has made an excellent start to this campaign.

He was on the losing end of a short-head photo-finish with the reopposing Astro King at Nottingham in April before succeeding by the same margin at Haydock, with the David O'Meara-trained pair Shelir and Escobar in behind.

The fact he is now 12lb higher than 12 months ago highlights how well in he was off 87, and he remains unexposed having had just the six handicap starts.

Thady Gosden, joint-trainer of Haqeeqy and Magical Morning
Haqeeqy didn't fire last time in a Listed race at the track in April after which he was a bit quiet at home but he's been in good form since then. This has been the plan with Magical Morning for a while as he goes well fresh.

Michael Dods, trainer of Brunch
He's in good form, we wouldn't want it to dry up any more as he's a better horse on good ground, but we hope he'll give a good account. It's ultra-competitive but you've got to give it a go, haven't you?

Ado McGuinness, trainer of Bowerman
He's been running solid races in Listed and Group company this season, he wasn't beaten all that far after a slow break at the Curragh, and I think he's going to enjoy the ground.

David O'Meara, trainer of Escobar and Hortzadar
Escobar ran a good race in the Victoria Cup at Ascot earlier this season and they didn't go hard enough for him at Epsom last time. Hortzadar ran well in the Lincoln on slow ground and put in a good effort at Epsom last time. I think the faster conditions will be fine for him.

Richard Hannon, trainer of Beat Le Bon and Ouzo
I was very pleased with Beat Le Bon's handicap run. There was always going to be a time where he'd come good and start running well again and hopefully this is it. He's a very quirky horse, things have to go right, but if they do he's capable of beating anything. Ouzo has a bit of a mind on him, but he's a very good horse on his day.

Ed Walker, trainer of Matthew Flinders
I was very pleased with his run at Newbury and although I was disappointed with him next time at York, he's run below expectations three times there now and I'm happy to blame the track. This stiff mile on fast ground would be absolutely ideal – I just hope they don't get the rain.

Noel Meade, trainer of Layfayette
It'd be a bit of a concern if the ground ended up being very quick, but we've got a good draw, a good rider and he goes there in great form.

Jessica Harrington, trainer of Pepperoni Pete
He's been a revelation this year. At the beginning of the season he was rated 68 so I don't think anyone could have predicted he'd end up running in the Royal Hunt Cup. He'll take his chance as an outsider.

William Haggas, trainer of Irish Admiral
We didn't think he'd get in, so it's a bonus he has. The straight track and fast ground should suit him very well.
Reporting by Maddy Playle

FIRST PUBLISHED 6:00PM, JUN 15 2021
There was always going to be a time where he'd come good and start running well again and hopefully this is it

Can Andrew Balding emulate his father Ian and become champion Flat trainer? Can Mother Earth continue Aidan O'Brien's fine French form in the Rothschild? 'Our most exciting horse in a long time' - plans set out for electrifying Baaeed Dramatic repeat for Current Option as loose horse almost steals the show Celebrations all round as Good Birthday completes 131-1 treble for Jason Watson Brilliant Baaeed strolls to fourth victory to leave Haggas aiming at the top