Royal Ascot could be on Redzel's radar after Darley Classic win 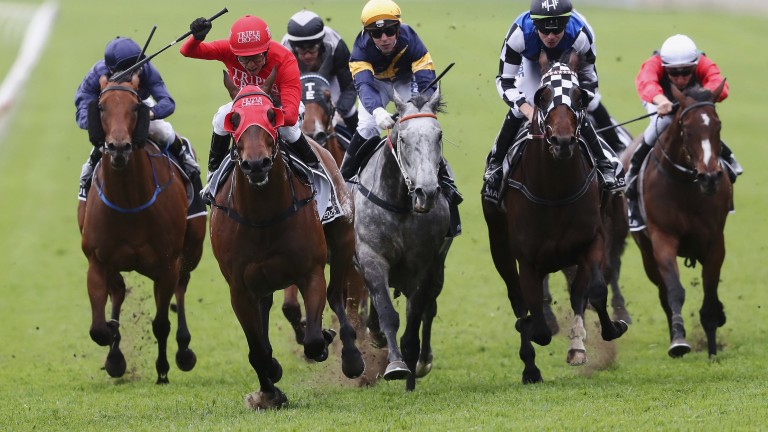 Redzel: followed up his Emirates win with a stylish victory in the Darley Classic at Flemington on Saturday
Mark Evans
1 of 1
By David Jennings UPDATED 2:55PM, NOV 11 2017

Redzel for Royal Ascot – that was the clamour coming from the Triple Crown syndicate who part-own the superstar sprinter following his sixth success in a row in the Group 1 Darley Classic at Flemington on Saturday.

Having successfully reached the summit of Everest last month, winning the world's richest turf race at Randwick, Redzel confirmed his superiority over Vega Magic And crowd favourite Chautauqua with a stylish all-the-way win to claim the $600,000 (£350,877) winner's cheque.

Josh Tinning, racing manager for the Triple Crown syndicate, is now hoping that Redzel will be routed to Royal Ascot in 2018 for a crack at the Diamond Jubilee Stakes.

Tinning said: "We would all absolutely love to come to Royal Ascot with Redzel. That would be a dream come true for us all and hopefully we can make it happen but we will enjoy today first. It has been the most amazing journey for all of us."

Peter Snowden now believes Redzel is the best Australian sprinter in the business.

The winning trainer said: "I thought he proved himself to be the best sprinter in Australia in the Everest but the hype around him said that he needed to do it again and that's what this guy keeps doing. He keeps proving the doubters wrong and keeps getting it done with professional performances."

Folkswood could only finish fifth in the Group 1 Emirates Stakes, the second richest turf race at Flemington during the Spring Carnival, with the spoils going to the Darren Weir-trained Tosen Stardom who surged home to score under Damien Lane.

Folkswood, who claimed the Cranbourne Cup before finishing third to Winx in the Cox Plate, had every chance under Kerrin McEvoy but lacked a finishing kick and was buried in the blanket finish for the placings.

Jockey Kerrin McEvoy said: "He ran a good race. He's very honest. He was parked there on the outside of the leading two. He actually regained momentum and got going the last furlong so he's run a good race."

The Taj Mahal, trained by Aidan O'Brien, took fourth with jockey Ben Melham saying: "He ran great. He jumped and travelled a lot better today. He had a beautiful run throughout. I felt he went as good as he could go."

Tempest triumphs for Haggas but stays in Oz

William Haggas celebrated his first Australian winner when Fastnet Tempest narrowly landed the Melbourne’s Own 3AW Trophy under Kerrin McEvoy but the four-year-old will stay down under and join the David Hayes stable.

Haggas and McEvoy teamed up for a Royal Ascot winner back in 2008 when Collection claimed the Hampton Court Stakes and the Australian rider was thrilled to repeat the feat in his native country.

McEvoy said: "It's great to win one over here for William Haggas. I actually rode a Royal Ascot winner for him a few years ago so it's good to continue the association.

"This was a nice race for Fastnet Tempest. I hit the front a bit early but I had the edge on the second horse and he held on well. It was a good performance."

It has been a profitable 2017 for Fastnet Tempset who won the Victoria Cup at Ascot in May and followed up in a handicap at Chester later that month.