Round five is on: Ribchester and Galileo Gold set for Newbury showdown 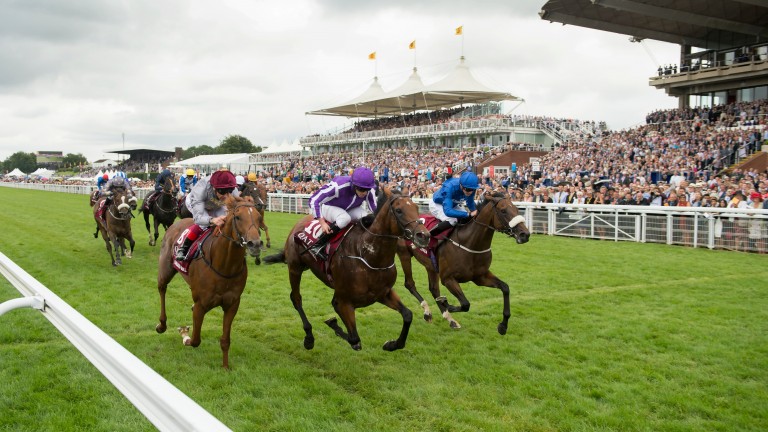 Galileo Gold (left) and Ribchester (right) are set to face off again in the Lockinge on Saturday
Edward Whitaker
1 of 1
By Maddy Playle 10:30AM, MAY 20 2017

Let battle commence. After facing off in the 2,000 Guineas, Sussex Stakes, Jacques Le Marois and QEII last season, the rivalry between Ribchester and Galileo Gold is set to be renewed in the Al Shaqab Lockinge Stakes at Newbury on Saturday.

Lightning Spear, who contested the final three of those races, is also set to reappear, as nine were declared for the weekend's showpiece event.

Ribchester, who has the fitness edge having finished third behind Vivlos in the Dubai Turf in March, will this time benefit from the presence of a pacemaker, as Godolphin run Toscanini to undertake front-running duties.

Old foe Galileo Gold, who beat him first time out last season, has not won since the St James's Palace Stakes, but both trainer Hugo Palmer and regular partner Frankie Dettori believe the colt retains his sparkle.

Martyn Meade is readying stable star Eminent for the Investec Derby, but Aclaim improved markedly last season and should give him plenty to get excited about in the interim.

Ballydoyle have reinvented Oaks fourth Somehow by running her over a mile, and she will be their sole representative in a race they haven't won since Hawk Wing took apart his rivals in 2003, as Cougar Mountain was not declared.

Hanagan is built of cement but needed to be even harder to make amazing comeback And you thought finding the Royal Hunt Cup winner was hard . . . 'He's a horse we like a lot' - Roger Varian could hold key to big-field handicap Graeme Rodway on the importance of getting the right rider in the Sandringham Nick Bradley Racing lining up ten-strong assault on the royal meeting 'If he hadn't run well today we were in trouble' - Ascot winner back in form