Rouget v Fabre - or is the Poule d'Essai des Pouliches more than a match race? 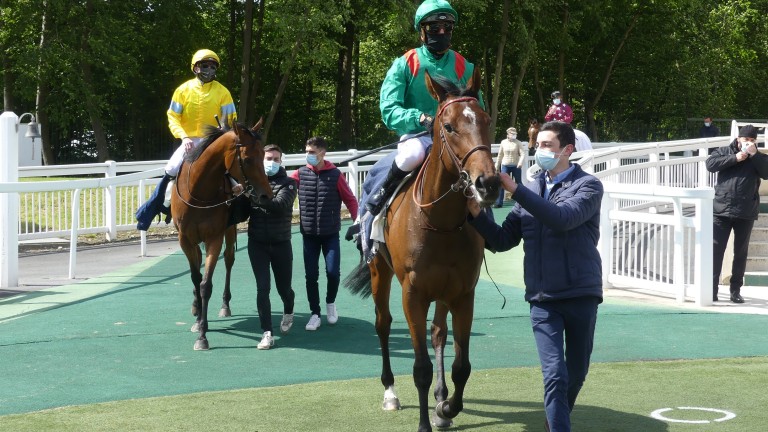 Simeen and Christophe Soumillon return after making it three wins out of three at Chantilly
Racing Post/Scott Burton
1 of 1
By Scott Burton 6:00PM, MAY 31 2020

The market bills this as a duel between Tropbeau and Simeen, each representing one of France's mighty powerhouse yards.

Andre Fabre sent Tropbeau to the Prix de la Grotte with stamina for a mile still to be proved and, while they only went "trial pace" she still had enough in the tank to repel Dream And Do, as well as stablemate Tickle Me Green.

Moreover the move from Longchamp's sweeping right-hand curve to the flat straight of Deauville plays into her experience at two having won the Shadwell Prix du Calvados over 7f last summer, before winding up third in the Cheveley Park Stakes when dropped back in trip.

All of which means that Tropbeau sets the standard, while Fabre will have left something to work on.

The case for Simeen rests a little more on the visual impact she made when maintaining her unbeaten record in a Chantilly conditions race, as well as Rouget's conviction that she is a high-class filly.

Rouget has trained the winner of this race four times in the last 11 years and appears to have another fine crop of three-year-old fillies in 2020.

On what they have achieved to date, the discrepency in price looks justified, but Simeen looks to have scope to make life really hard for the favourite Tropbeau.

While the history books are not all that kind to fillies beaten in the Grotte, mention must be made of Dream And Do, a winner at Group level on a straight track at two and who was not given an unduly hard time in the trial, as well as Tickle Me Green, an imposing recruit from Germany.

The other top-class form on show is that of Marieta, who was essentially outstayed by Albigna on very testing ground on Arc day and whose trainer Mauricio Delcher Sanchez can be trusted to have her well forward for her seasonal return.

The Prix de la Grotte enjoyed a golden era between 2005 and 2012, with five fillies going on to double up in the Pouliches. However, Castle Lady (2019) is the only dual winner in the last seven runnings. Disqualified from first place in the 2006 Pouliches, Price Tag is the only horse this century to have passed the post first in the Classic after being beaten in the Grotte.

Jean-Claude Rouget, trainer of Simeen
She has coped well each time she has gone up in class and this has been her sole objective. It's a challenge which we're taking on and we will see if she is up to it or whether we need to lower our sights. She has worked once on the track and, though her three races have all been around a turn, that is the case with a lot of the runners. Because of the hurried preparation she is running back slightly quicker than is ideal.

Andre Fabre, trainer of Tropbeau and Tickle Me Green
Tropbeau is a very easy and sound filly, easy to train and always a good mover. She is a reliable filly. The fast ground should not be a problem, she has a lot of speed, but she likes to come from behind as is a lazy starter who can break a bit cold. Tickle Me Green is a beautiful filly with a lot of class and she's going to be close.

Mauricio Delcher Sanchez, trainer of Marieta
The idea was to return in the Prix Imprudence over 1,400 metres [7f] but once that race was lost, we decided that the Grotte would be like running in a 'mini Poule d'Essai' ahead of time and that didn't appeal. So I decided to go straight to the Classic. The Boussac on heavy ground proved to be the limit of her stamina last year but she was two then and it was a performance that allowed us to dream of her over 1,600 metres [a mile] at three. Her last work was good and I’m extremely hopeful of a big run.

Fabrice Chappet, trainer of Mageva and Speak Of The Devil
After the Prix Imprudence was cancelled we elected to stick at 1,400 metres for the Pont-Neuf with Mageva as she has plenty of speed and can take a tug. She ran a very good race and will love the dry conditions. Speak Of The Devil had a good learning experience on her comeback against the colts, where she was badly drawn but finished off really well to be only beaten by Shining Ocean. I would have preferred that she had a bit more experience and it remains to be seen if she is as good on firm ground.

Frederic Rossi, trainer of Dream And Do
She ran a very good comeback race when she was not at 100 per cent and was a bit too fresh for her own good. Monsieur Fabre's fillies look the ones to beat, but I think it's quite open and she has been working well.

Yann Barberot, trainer of My Love's Passion
The race coming to Deauville can only be an advantage. She knows the track here by heart and it will be fun to take up the challenge. There are no foreign runners and she had earned the right to have a crack.

Francis Graffard, trainer of Emoji
She is in better form than before the Prix Vanteaux, when her work was a bit below par and she showed signs of being in season. She looks like a 1,600 metre horse to me after wandering around in the straight that day, though she won't have her preferred soft ground.

Mikel Delzangles, trainer of Ellerslie Lace
She ran well on her comeback when she undoubtedly needed the race. It was perfect from that point of view and she has come on for the run. She needs to improve, but I expect a good performance. She has never encountered quick ground or a straight track, but the main thing is that they go a reasonable pace.

FIRST PUBLISHED 6:00PM, MAY 31 2020
The fast ground shouldn't be a problem, she has a lot of speed but she likes to come from behind as she is lazy starter who can break a bit cold