Rosental on Hand to expose any rustiness from Vermeille heroine 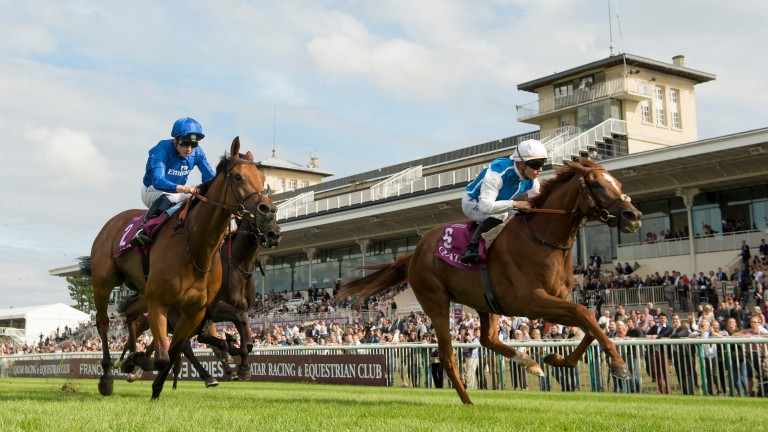 Left Hand (white sleeves) makes her seasonal reappearance under a 7lb Group 1 penalty in the Prix Corrida
Edward Whitaker
1 of 1
By Scott Burton 6:00PM, MAY 22 2017

French racing fans can look forward to a real midweek treat on Tuesday, with two further Group races and a Listed contest to back up the Prix Cleopatre at Saint-Cloud.

Sarafina and Treve have defied Group 1 penalties to land the Prix Corrida (1.50) in recent years and last season's Vermeille winner, Left Hand, will become the latest to attempt the feat on her seasonal debut.

The Wertheimers' daughter of Dubawi was second to La Cressonniere in last season's Diane over this 1m2½f but seemed to appreciate the extra distance when defeating Endless Time at Chantilly last September.

Carlos Laffon-Parias runs Redcold as a pacemaker for Left Hand, a development that could also suit the Luca Cumani-trained Rosental, who scored over course and distance at Listed level last October.

"I'm very happy with the way she's been going and she seems in very good form," said Cumani. "There should still be a bit of moisture in the ground, which will suit her. It's obviously tougher than her Listed win there and the top one [Left Hand] is the one to beat. If I can’t win I hope that Haggle can because we bred her."

Charlie Appleby sends D'Bai for the Listed Prix de Pontarme (12.10), with the drop back to a mile looking the smart play after he appeared not to stay in the Criterium de Saint-Cloud last backend.

Andre Fabre saddles half of the four-runner field but it is hard not to have been impressed by the two wins of the Pascal Bary-trained Ratiocination at Chantilly this spring.

The Prix du Lys (3.00) is a springboard for the Juddmonte Grand Prix de Paris and represents a chance of further progress for Shakeel, whose trainer Alain de Royer-Dupre produced a promising debutante winner at Chantilly on Monday in Baiyouna.

FIRST PUBLISHED 6:00PM, MAY 22 2017
There should still be a bit of moisture in the ground, which will suit her