Talk of the Tracks WARWICK 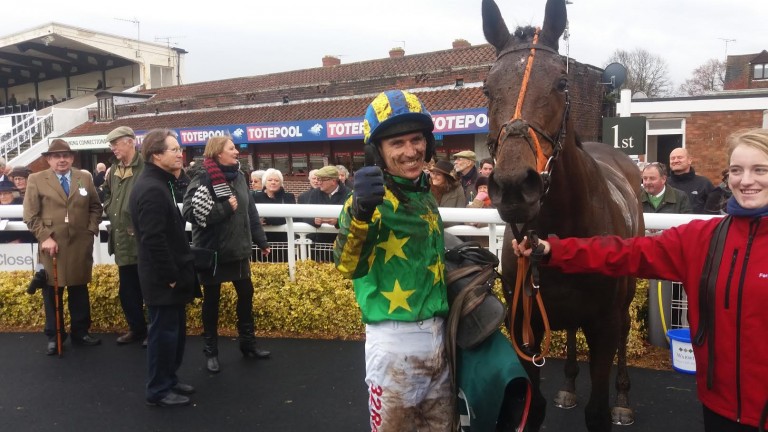 Paddy Brennan hopes to inspire the next generation of riders after the Cheltenham Gold Cup winner became just the 23rd jockey to ride 1,000 winners over jumps in Britain and Ireland thanks to Colin’s Sister's success in the 2m5f mares' novice hurdle.

The 35-year-old, who hopes to be riding on soggy afternoons at Warwick into his forties, put his achievement down to hard work and dedication rather than raw talent.

“I count myself very lucky. I never thought I was that blessed with talent but I always thought I worked extremely hard,” said Brennan.

“People put doubts in your mind all the way through and I love to prove people wrong. I love to think I’m an example to other young jockeys coming through; you might not be at the very top but I’ve proved this is possible.”

Brennan, who won the Gold Cup on Imperial Commander in 2010, enjoyed a renaissance last season thanks in part to his association with owners Bob and Jean Bishop and their star chaser Cue Card, yet even in celebration he could not help mention the heavy fall that ended his hopes of a second Gold Cup win.

He said: “Last year was unbelievable but the Gold Cup did feel like the one that got away. The highlight was winning that race on Imperial Commander – it’s the greatest race. It feels like yesterday but lots has happened since then.

"The one thing you learn to do as you get older is enjoy the good days. I just rode a very nice filly there and that’s why we do it. I’d love to ride until I’m 40 but this is a tough game. I want it really bad and I’ll keep wanting it.”

Brennan was especially pleased to achieve the landmark winner for close friend Fergal O’Brien, who was the first to congratulate the rider.

“Fergal is like a brother and we stick together,” he said: “There’s so many people to thank. So many trainers and most of all the stable staff who have put up with me for so long, and everyone else involved in racing who make it such a wonderful sport.

"The two things I wanted to do in my career was to win a Gold Cup and ride 1,000 winners and I’ve done both.”

Top team strike again
Alan King, JP McManus and Barry Geraghty combined to win the opening novice hurdle on the card with Yanworth last year and history repeated itself as Midnight Maestro picked off his rivals after the last for a snug success.

“He’s been ready to run for a couple of weeks but we just wanted to wait for a bit of cut,” said King. “He’ll probably run with a penalty next and stick to two miles for the time being. I’m not sure he’s quite a Yanworth but I hope he’s got a bright future.”

Geraghty had earlier been to King’s Barbury Castle stables to school Yanworth, who returns to action at Ascot on Saturday, although with My Tent Or Yours entered at Haydock the same afternoon the rider has a tough choice to make. “It’s not an easy one – we’ll just wait and see,” said Geraghty.

Notch top of the class
Top Notch easily justified odds of 1-8 to land the £15,000 2m novice chase and give Nicky Henderson a timely boost after a challenging weekend.

“I’m thrilled with him,” said the winning trainer. “I’m trying to persuade the owners to run him in the Fighting Fifth Hurdle but they’ve got Sceau Royal in there.

"We’ll keep chipping away through the winter because he loves this ground. We could always switch back to hurdles but the way he’s jumped there you could see him going on over fences.”

Thought for the day
The afternoon belonged to Paddy Brennan, who proved what is possible with the right work ethic and desire. Here’s to the next 1,000 Paddy!