Rodriguez takes title blunder on the chin in excellence series 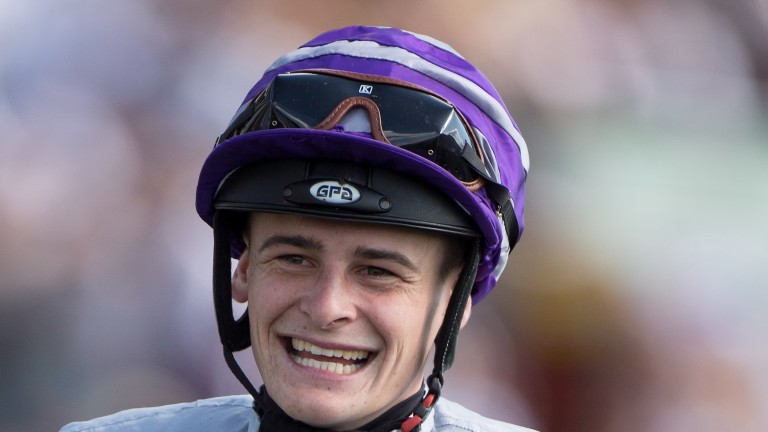 Callum Rodriguez: the man to follow on the all-weather this season
Edward Whitaker
1 of 1
By Bruce Jackson 2:52PM, SEP 30 2017

Callum Rodriguez was past the post in the Racing Excellence series sponsored by the ROA and Racing Post after taking an unassailable lead with the points he had racked up in earlier races.

That was until he broke the whip rule in Haydock's last race in the series. All his hard work was undone in one stroke, or three strokes actually.

To add insult to injury the 5lb claimer had already been presented with his prize of an Equicizer before the race. He walked away with a seven-day ban for using his whip in the forehand position banned in these apprentice races.

Rodriguez was in philosophical mood as he reflected on his blunder on fourth-placed Beverley Bullet.

"You have to live and learn," said Rodriguez. "And move on. Forget about the day before and kick on. The ground was absolutely bottomless and I was just trying to get every inch out of him.

"Riding every day three or four times it was just a natural reaction – I knew straight away after giving him three in the forehand position. I put my stick down immediately and pushed out to the line.

"I knew walking back into the weighing room and said to the jockey coach, 'What a muppet I am'."

Rodriguez added: "Losing the Equicizer is no big deal as I see my jockey coach Phil Kinsella as often as I can and he has one and we have one in the yard so I get plenty of practice."

Rodriguez, who rode his first eight winners last year, is three away from riding out his 5lb claim on reaching 50 winners, which includes this year's Ebor on Nakeeta.

"I keep kicking on and want to get down the 3lb this season before I go to America – I am going to work for Michael Matz on November 22 but will be back on December 20 and will be taking my time through the winter."

Rodriguez's loss was gain for Megan Nicholls' and Rowan Scott's gain. The pair did not ride in the final Haydock race but shared the title.

FIRST PUBLISHED 2:52PM, SEP 30 2017
The ground was absolutely bottomless and I was just trying to get every inch out of him