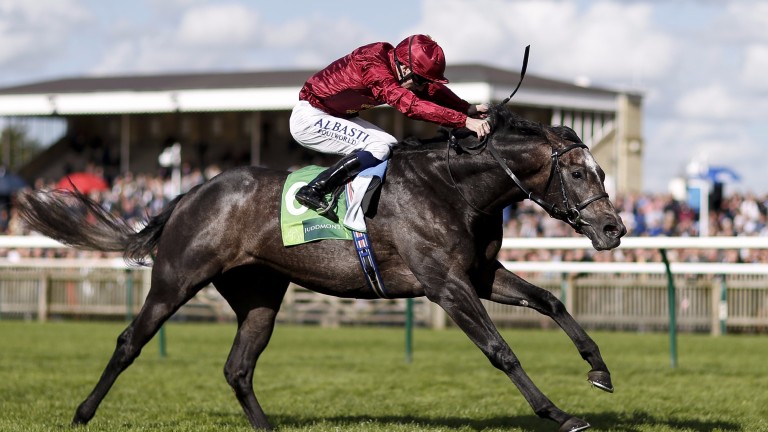 Roaring Lion, who is expected to do even better things as a three-year-old, will bid to stretch his unbeaten record to four in the Group 1 Racing Post Trophy at Doncaster on Saturday.

Trainer John Gosden has been debating on whether to commit the Royal Lodge Stakes winner to Town Moor or next month's Breeders' Cup Juvenile in California, but it appears a trip to Yorkshire has been preferred, with the ground on Tuesday officially described as good to soft, good in places.

David Redvers, racing and breeding advisor to the colt's owners Qatar Racing, has high hopes that Roaring Lion will prove capable of extending his winning sequence prior to making a further splash in 2018.

"He's a horse who seems to have improved throughout the season," Redvers said. "We have the option of the Breeders' Cup Juvenile, but Mr Gosden felt very strongly that if the ground at Doncaster was reasonable then he would like to go there.

"He feels that Roaring Lion is a next-year horse and we're very excited by his prospects. It looks a very competitive race, but we'll go with high hopes.

"We won the race with Elm Park three years ago and had a great day up there. Roaring Lion is very different to Elm Park, but goes to Doncaster with a stronger chance, if anything. I'm very optimistic about him."

Roaring Lion took the step up to Group 2 level in his stride when defeating the 5-6 favourite Nelson at Newmarket last month and will do battle again with representatives from Aidan O'Brien, who will attempt to set a new world record for Group 1 victories.

Saxon Warrior, who could be Ballydoyle's standard bearer at Doncaster, hardened as favourite on Tuesday, with bet365 trimming his odds to 2-1 (from 9-4).

Godolphin, who supplemented Loxley for the final Group 1 of the year on Monday, also have dual scorer Masar entered, but he could be set for the Breeders' Cup instead.

Charlie Appleby, who trains the pair, said: "Masar has the Breeders' Cup option. We think he has the right profile for that race.

"He'll do a bit of work on Wednesday morning and then we'll make a decision about Doncaster. He won't run in both.

"Slow ground at Doncaster wouldn't be ideal for him. Although he has finished third in a Group 1 on soft ground, he is a better horse on a sound surface."

He added: "We supplemented Loxley at the start of the week, and he is going to be turning up. He is an exciting horse. He learnt plenty from dead-heating at Goodwood on his debut and gained a lot of experience from it.

"He has a bright future − that's why we've supplemented him for the Racing Post Trophy."

Verbal Dexterity, who will represent Jim Bolger at Doncaster, was cut on Wednesday to 10-1 (from 14) by Ladbrokes for next year's 2,000 Guineas.

FIRST PUBLISHED 6:24PM, OCT 24 2017
Mr Gosden feels that Roaring Lion is a ‘next year horse’, and we’re very excited by his prospects