Rival, teacher and small-screen star, but mostly a top man 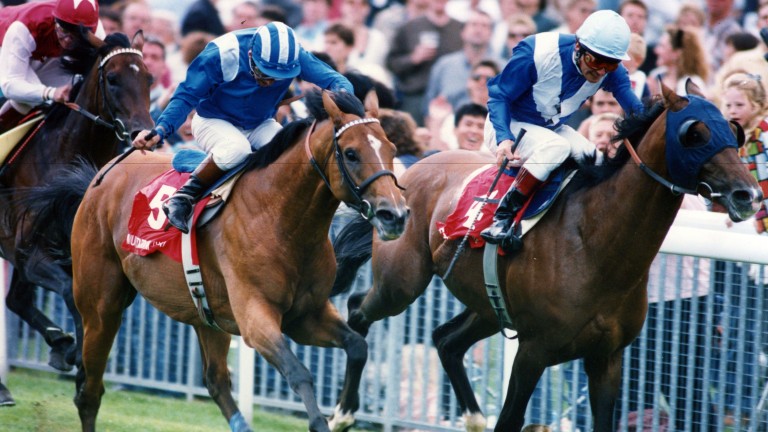 Walter Swinburn on Ezzoud (right) holds off Muhtarram and Willie Carson in the Juddmonte International in 1994
Edward Whitaker
1 of 1
9:32AM, DEC 15 2016

He was a massive help and a marvellous tutor. He was always good to me and we always had a good relationship. He always filled me with confidence and there was never any pressure. When he finished training we lost some contact, but I rang him three or four times. I wanted to speak to him about racing and what he thought about certain things, but I didn't want to bother him and now I wish I did. When I was getting a lot of bad publicity over the Postponed ride in the Hardwicke last year he was the only man to ring me up and say not to worry about it. He said don't change anything and in a minute they'll realise how good you are. It took me by surprise he said that, but he was a top man.

Walter rode a Derby winner before I ever rode a winner at the same age – isn't that incredible? He was natural. He was born into the racing world. He was born in Oxford, but he always said he was Irish – he was adamant he was Irish. He was one of those lads who when he sat on a horse he knew exactly what to do. I thought I'd won the Arc on Some Princess, but Walter was so cool. He sat behind and the gap opened in the last furlong and he came and beat me on All Along, the little devil. That was his brilliance in being such a cool customer on a horse on the big occasion.

He fitted in really well on Channel 4 and was a rarity in a Flat jockey who had hung up his saddle relatively early. Sliding straight in, he was able to give a first-hand perspective on many of the horses we were pointing cameras at and that's what attracted me to him. He was a very mild fellow who was keen to learn and sat between John Francome and Jim McGrath – they made a terrific trio. They hit it off really well and I recall having lots of calls and correspondence from viewers who appreciated his contributions to the programme. It was a new discipline for him, but he'd been interviewed plenty of times before so he wasn't coming at it completely raw and was a very good fit. I was a huge fan.