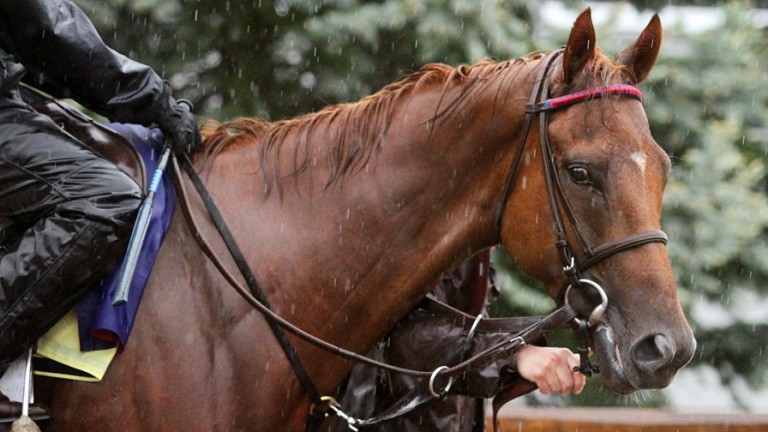 Ring Weekend: US Grade 1 winner could be heading to the Queen Anne at Royal Ascot
Jessie Holmes/EquiSport Photos
1 of 1
By Nicholas Godfrey 6:00PM, JAN 6 2017

British-born trainer Graham Motion is eyeing a visit to Royal Ascot this summer with Grade 1 winner Ring Weekend, who headlines a double-figure field for the San Gabriel.

Motion, whose Miss Temple City has twice made the frame at the royal meeting, is considering the six-year-old for the Queen Anne Stakes, the race in which his Kentucky Derby/Dubai World Cup victor Animal Kingdom disappointed in 2013.

Ring Weekend won the Grade 2 Seabiscuit Handicap at Del Mar in November on his most recent outing and is the mount of Drayden van Dyke.

"This race will decide what we do for the rest of the winter," Motion said, speaking to the Blood-Horse.

"He's been in training for almost a year now, so if we're going to freshen him up for a possible trip to England, it wouldn't be a bad time. But he needs to keep performing well to even consider that challenge.

Motion added: "Tepin showed last year that it can be done. She's exceptional and I know it will be a challenge for us."

Ring Weekend is one of six Graded stakes winners in Saturday's field, among them dual Brazilian Group 1 winner Some In Tieme. In March he was third past the post in the Gran Premio Latinoamericano, the South American championship event, only to be promoted to first after two separate disqualifications for those ahead of him.

FIRST PUBLISHED 6:00PM, JAN 6 2017
It's something I've mentioned before with this horse. It's something I think he's capable of doing and he's handled soft ground in the past