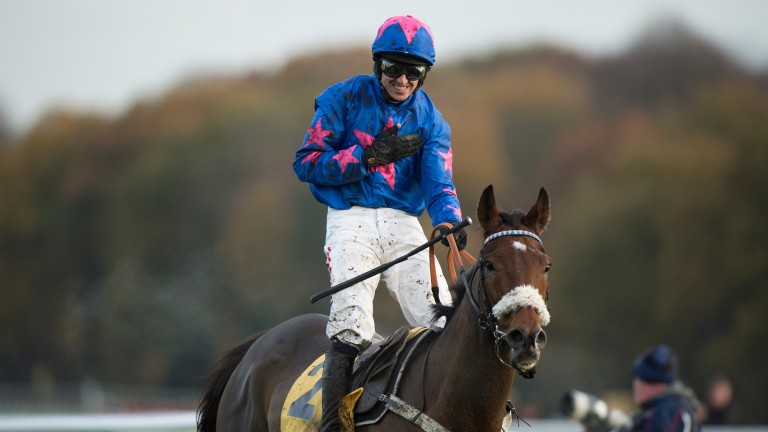 Perhaps now the man himself will start to believe what we've all thought for quite a while – he really is some jockey.

When Paddy Brennan rode the 1,000th winner of his career at Warwick this week the most striking thing was his humility at joining the pantheon of jump racing greats alongside Tony McCoy, Richard Dunwoody and other distinguished riders.

He stressed that he "never thought I was blessed with that much talent" and reckoned himself "an example to young jockeys that anything is achievable as long as you work hard".

But Brennan's effort on Cue Card proved once again, not that any more proof was needed, that this is a rider who can get the job done on the biggest occasions.

He showed that all those years ago on Inglis Drever in his days with Howard Johnson, confirmed it on Nigel Twiston-Davies' Imperial Commander in the Cheltenham Gold Cup and has scarcely put a foot wrong on the Grade 1 stage since teaming up with Cue Card just over a year ago.

Typically he might beg to differ, pointing to the fall three out that robbed the burgeoning partnership of Gold Cup glory in March.

And equally typically he directed the cheers to his victorious mount as the crowd stood and roared on his return to the winner's enclosure after they repeated last year's Betfair Chase success.

But you don't ride 1,000 winners on hard work alone and Brennan deserved the plaudits after he judged things perfectly, taking the canniest route on the inside rail, never allowing Coneygree too much rope, heading him four out and scoring with authority.

Yet the rider was quick to pay tribute to the way Cue Card's trainer had coaxed so much improvement out of the ten-year-old since his third place in the Charlie Hall Chase at Wetherby. "Colin Tizzard and all the team at home had him in some form. I hacked him to the start and I knew instantly things were going to be so much different today," said Brennan.

"He was the Cue Card I know. When he's in that form you can ride him whatever way you want, he's different class.

"I'm lucky to be riding him and he keeps surprising me how good he is, when he has the right conditions with a little bit of ease underfoot it's dangerous what he can do. If I'd dreamed 1,000 times I'd never have thought I would be lucky enough to ride a horse like him."

Lucky to be on him, perhaps, but riding a successful chaser – who has claims to be the most popular horse in training – brings its own pressures.

"There is a responsibility in riding a horse like Cue Card," Brennan said. "I'm not saying he's Kauto Star but he's got an aura, he's got a following of so many people.

"I felt a lot of pressure today. I felt maybe it got away in the Gold Cup last year but after today I think we've got a chance of putting that right.

"This was always in the back of my mind after I reached 1,000, there was never going to be much celebration until after I rode Cue Card today. I've got no rides tomorrow, so there will be celebrations."

FIRST PUBLISHED 5:15PM, NOV 19 2016
I felt a lot of pressure today. I felt maybe it got away in the Gold Cup but after today I think we've got a chance of putting that right