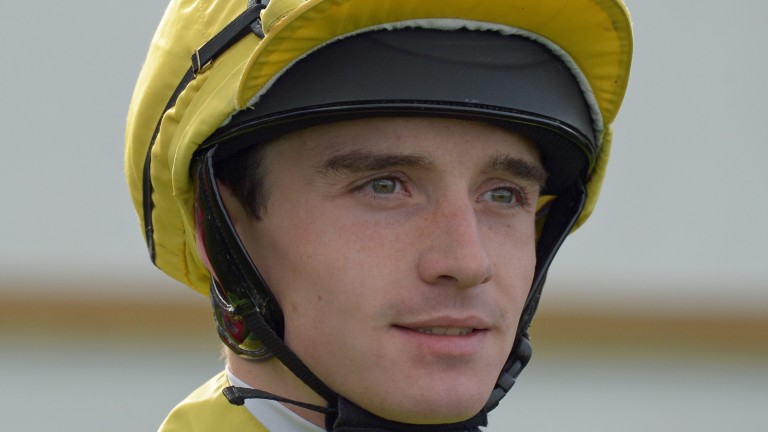 George Chaloner could not believe his bad luck as he reflected on two identical falls in a row, three months apart and on the all-weather, that has left him with a wedge fracture of his T8 vertebrae and another broken foot.

“There's one fall to 700 rides on the Flat,” said Chaloner. “I'm the unluckiest person to have two falls on two rides.

“It was exactly what happened at Wolverhampton last time,” continued Chaloner, who was having his comeback ride at Newcastle on Wednesday night when falling from Woodacre, who broke his leg. Nearly three months earlier a fall from another stricken mount at Wolverhampton left Chaloner with a broken collarbone.

“I just remember his head going down, but then I was knocked out and don’t know what happened.

“We thought it was the perfect first ride back as Woodacre was a legend of a horse, always trying his best.”

Chaloner feels the all-weather could have contributed to his injuries. “I’m sure I’d have slid on grass and wouldn’t have been knocked out. The all-weather surface is horrible to fall on,” he added. “I was aching all over and knew I’d broken my foot, but it was a bit of a surprise when they told me I’d fractured my T8,” added Chaloner, who could not speak highly enough of the care he received after the fall.

“Dr Jim Connolly, head of A&E at the Royal Victoria Hospital in Newcastle, was on duty and there were 15 people waiting for me there. They were all brilliant and after scans I was on the trauma ward in under two hours.”

That was, he said, in contrast to his hospital treatment after his Wolverhampton fall.

He recalled: “I was on a trolley in a corridor for an hour and a half as they thought I was a drunk in fancy dress on a stag do with my silks still on and I was not making much sense.”

Chaloner has had his spirits buoyed by his weighing room colleagues visiting on their way to the races, and his boss Richard Fahey has been in daily contact.

So too has Richard Whitaker, trainer of the ill-fated Woodacre, and Jack Berry, who joked with Chaloner he would have to put him on the payroll at Jack Berry House, the Injured Jockeys Fund rehabilitation centre.

The rider admitted: “I'll be going back to my second home! They got me back a month early from my collarbone and two months early after my first broken foot.

“I won’t be rushing this, though. They were chuffed for me getting back and were watching on Wednesday, only for this to happen. They were as devastated as me.

“I still feel lucky,” confessed Chaloner, who received a phone call from Freddy Tylicki, left paralysed after a fall on the all-weather at Kempton last year.

“There were also lads in the trauma unit who were in a really bad way; there are always people worse off than you.”

Lucy Alexander is another jockey who has been unlucky with injuries and she suffered a broken cheekbone when kicked in the face in the fatal fall of Rocklim at Musselburgh on Saturday.