Rider back on track after Taquin triumph 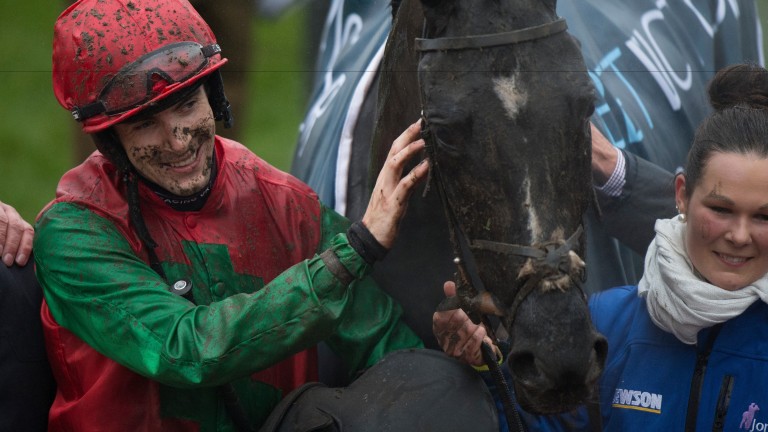 A delighted Aidan Coleman after his big-race victory
Edward Whitaker
1 of 1
By Lewis Porteous 6:23PM, NOV 12 2016

Aidan Coleman admitted it had been a "nightmare" few weeks but the aches and pains of some brutal falls and a frustrating winless run evaporated in the dying strides of the BetVictor Gold Cup as he lifted Taquin Du Seuil to a last-gasp success.

Not one to moan, Coleman only yesterday revealed a fall at Wetherby at the end of October had left him nursing a fractured cheekbone, while a 19-day losing streak had compounded that pain until yesterday.

"I broke my cheekbone and haven't had a winner since Third Intention in the Old Roan at Aintree [on October 23]," said the rider. "But that’s life as a jump jockey and you have to get out there, get on and win these races. You need the horses and I was just delighted to get on the right one."

Despite his recent winless run, Coleman still sits third in the Stobart Jumps Jockeys Championship, a remarkable feat considering he lost the backing of John Ferguson’s considerable string when the Newmarket trainer called it quits in April.

His link up with Taquin Du Seuil’s trainer Jonjo O’Neill has undoubtedly softened that blow, a fact not lost on Coleman in the debrief.

"Jonjo’s a fantastic man to ride for," he said. "I could not be happier for him and the whole team at Jackdaws. They are such a hardworking team and, for whatever reason, it has not been coming together for them either but we are here now."

Despite being confident pre-race, Coleman thought all hope had disappeared as his partner struggled through the middle part of the race.

He added: "The first three-quarters of a mile were fine but the middle part of the race we weren’t happy. It was a salvage operation from turning down the back really.

"I wasn’t happy with anything – I wanted to be a fraction closer, jumping better and travelling closer. I thought he’d be the horse you’d pick out from the back of three out but it was the opposite – I was niggling away."

Reliving the closing stages, Coleman, whose 60 winners this season consist of 25 for O’Neill, said: "It wasn't his class that won it, it was his heart. He kept picking off a rival here and there, and from the back of the last he was brilliant."

Delighted to have Coleman on his team, O'Neill, whose losing run before the win stretched further than his rider's, said: "Aidan's a nice race rider, very technical. He's a good lad to go with and hopefully it will be a good, successful relationship."

There were certainly no complaints from winning owner Sir Martin Broughton, who hailed "a great ride" although admitted that was not his opinion at the halfway point.

Broughton said: "I thought he needed to be closer down the back straight but it turned out Aidan gave him a great ride. This horse gave me my first Grade 1 winner and my first festival winner. Him and Dodging Bullets are horses of a lifetime."

FIRST PUBLISHED 6:23PM, NOV 12 2016
It was a salvage operation from turning down the back really - I wasn't happy with anything