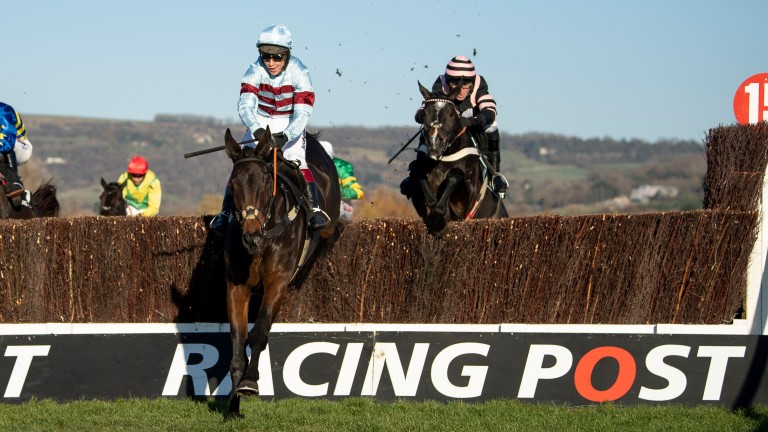 Champion jockey Richard Johnson is keeping faith that Lalor can land a poignant victory in the Racing Post Arkle on Tuesday despite the prospect of soft ground on day one of the Cheltenham Festival.

Lalor got bogged down on his last start at Sandown in December when he finished only third as the 8-11 favourite in the Henry VIII Novices' Chase and on Sunday he was eased to 9-2 (from 3) by BoyleSports with plenty of rain forecast before the start of the festival.

Although a sounder surface would have been preferred for Kayley Woollacott's stable star, Johnson believes Lalor has shown his versatility in regards to ground conditions.

"I don't think the ground will affect his chances as it was pretty soft at Aintree last year when he won the Top Novices' Hurdle," he said.

"It will be fresh ground as the Arkle is the first chase on the card, and he's going there fresh and well. The Sandown ground was much more tacky and the race probably came a bit too quick after his Cheltenham win [in November] as well."

Lalor is the lasting legacy of Woollacott's late husband Richard, who died in January last year after a battle with mental illness. As well as his Grade 1 victory at Aintree last spring, the seven-year-old gelding landed another emotional success for Woollacott with a seven-length victory in the Grade 2 Arkle Trial at the course in November on his first start over fences.

"If he can reproduce his run from November it will take a good one to beat him," Johnson said. "He's one of my best rides of the week. He's in really good form and I wouldn't swap him for anything else in the race."

Lalor is vying for Arkle favouritism with Glen Forsa after a field of 12 was declared on Sunday for the two-mile contest. The Gordon Elliott-trained Hardline continued to attract support at around 6-1, with Duc Des Genievres next best with some firms at 7-1.

Read exclusive previews of the Cheltenham Festival from 6pm daily on racingpost.com and the Racing Post mobile app

FIRST PUBLISHED 3:06PM, MAR 10 2019
He's one of my best rides of the week. He's in really good form and I wouldn't swap him for anything else in the race

Decision made: superstar mare Honeysuckle set to stay over hurdles this season New measures can ensure they are all well looked after Rooster Booster: a moment of glory wanted by all but expected by none Group 1 programme not suiting fast-ground horses