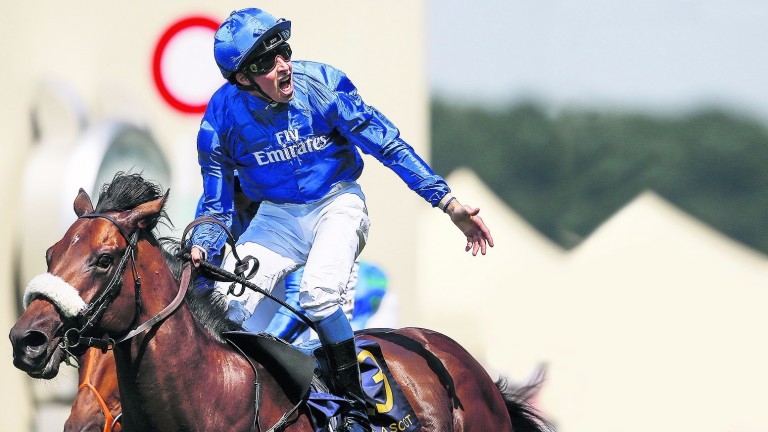 Ribchester could be aimed at the Breeders' Cup or sent on an audacious trip to Japan after he bids to cement his spot as Europe's top miler in Saturday's Queen Elizabeth II Stakes at Ascot.

Apart from a narrow defeat on saturated ground in the Sussex Stakes, Ribchester has dominated the mile division this season, his Group 1 haul for the year so far including the Lockinge Stakes, Queen Anne and Prix du Moulin, and he is a top-priced 11-4 favourite with Betfair Sportsbook to go one place better than last year in the QEII.

"Everything's gone according to plan and I'm very happy with him," said trainer Richard Fahey on Sunday. "He's very reliable and never lets you down. I'm very privileged to have him but he's been easy enough to train – he never has any issues."

Possible rivals on Saturday could include dual 2,000 Guineas winner Churchill and Beat The Bank, the new kid on the block among the milers who has won his last three starts over the trip in style.

Fahey added: "Beat The Bank is progressing and knows how to win. He's second favourite and is probably entitled to be but it's not just him to consider."

Discussions over where Ribchester might conclude his season are ongoing, according to Fahey. The Breeders' Cup Mile at Del Mar on November 4 is an option, as is the Mile Championship at Kyoto on November 19 – not least because of a lucrative bonus on offer for any horse completing the Lockinge, Queen Anne and Mile Championship treble.

Fahey said: "We’ve not drawn a line through the Breeders’ Cup and we’ll have to see how he takes Saturday. There’s been plenty of discussion but we’ll sit down with Joe Osborne, Jono Mills and the boss, Sheikh Mohammed, and have a board meeting after Champions Day.

"He's been accepted for Japan and that race gives us a bit longer. It's huge prize-money with bonuses for winning the three races, so it’s something to think about."

Asked if Ribchester might remain in training at five, Fahey said: "That's something else we'll discuss at some stage but he doesn't have to prove any more. I'd love to have him in training next year but he'd be going back and trying to win the same races.

"We've been extremely privileged to have him and the plan for a trainer like me is to find another one."

Fahey said Gabrial, Stamp Hill and Withernsea are all on target for the Balmoral Handicap on Champions Day but will not be joined by Birchwood, with the Group 2-winning son of Dark Angel retired and a possible career at stud now on the cards.

Hurricane Ophelia is unlikely to cause Ascot any headaches according to the Met Office, but a large area of low pressure towards the end of the week does have the potential to cause disruption.

A Met Office forecaster said on Sunday: "Hurricane Ophelia comes through tomorrow and will clear out by midday Tuesday but it's towards the end of the week things go a little bit downhill.

"Timings are unclear at this stage, and it's debatable where exactly it's going or how strong it's going to be. At the moment it looks like it's coming in from the south-west and all signals are for the southern half of the UK."

The going at Ascot was described as good on Sunday, with the inner course – which will be used only for the three round-course races if 'heavy' appears, or is likely to appear, in the going description - firm, good to firm in places.

A final decision on which course will be used will be made before declarations on Thursday.

FIRST PUBLISHED 5:31PM, OCT 15 2017
He's been accepted for Japan and that race gives us a bit longer. It's huge prize-money with bonuses, so it’s something to think about