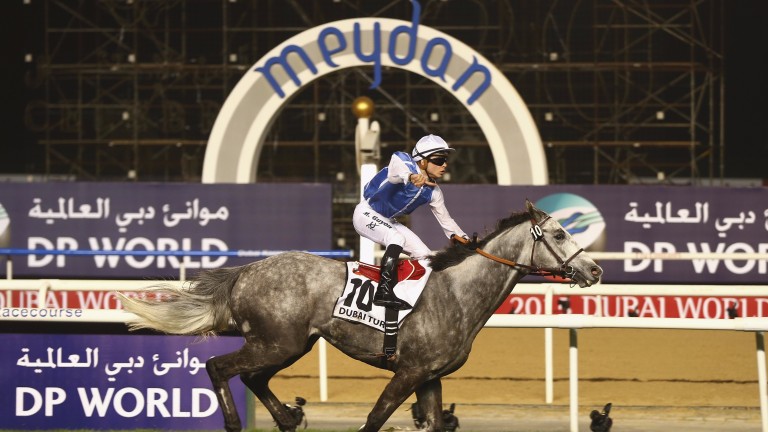 Prix Jacques le Marois winner Ribchester is set for a step up in trip in the Dubai Turf, but 2015 race winner Solow will again miss out on the big World Cup day prize.

Ribchester finished second to Minding in the Queen Elizabeth II Stakes after winning the Deauville Group 1 and is 7-2 favourite for the 1m1f Dubai Turf – previously run as the Duty Free – with Paddy Power and Betfair Sportsbook, despite never having raced beyond a mile.

Jim Clarke, assistant racing manager to Godolphin, said: "Richard Fahey is very happy with Ribchester and he's on track for the Dubai Turf. I believe the plan is to run him off the plane."

Solow has not run since early March last year, and while he is back in light work the race will come too soon.

One previous World Cup card winner who is likely to be at Meydan on March 25 is Postponed, who won the Dubai Sheema Classic last year and whose connections are eyeing a repeat.

Roger Varian's stable star is 11-4 favourite with Sky Bet and has already started his Meydan preparation which, as last year, will include a prep in the Group 1 City of Gold Stakes on Super Saturday, March 4.

Postponed's Newmarket neighbour Jack Hobbs, an 8-1 shot with Sky Bet, is also being aimed at the Sheema. Owned by Godolphin and partners, the five-year-old was last seen finishing fast into third in the Champion Stakes at Ascot, and connections have long had a trip to Dubai in mind.

Jack Hobbs has just started easy work and will not run beforehand. Trainer John Gosden said: "He is coming along nicely and the plan is to take him to the Sheema Classic, before which we'll take him for a racecourse gallop."

Heartbreak City, who lost out by a head in the Melbourne Cup, is set for another overseas mission, with trainer Tony Martin targeting him at the Dubai Gold Cup over two miles.

Martin said: "I have to have another chat with the owners, but we're planning to send him to the Dubai Gold Cup. He'll enjoy the sunshine and we've been happy with him since his run at Leopardstown."

The Dubai Racing Club received 1,549 nominations for 779 horses from 22 countries for World Cup day, most notably Arrogate, who could bid to follow up his victory in the $12 million Pegasus World Cup in the $10m Emirates Dubai World Cup.

FIRST PUBLISHED 12:51PM, FEB 8 2017
Richard Fahey is very happy with Ribchester and he's very much on track for the Dubai Turf. I believe the plan is to run him off the plane