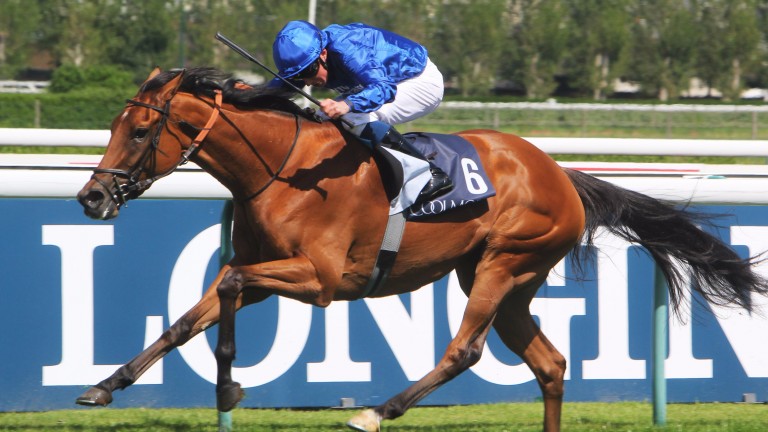 An unexpected rematch between Sobetsu and Coronet, who finished first and third in the Prix Saint-Alary at Deauville this month, will be one of the features of the Investec Oaks at Epsom on Friday, for which ten have been declared.

Godolphin's sole entry against three from Aidan O'Brien, headed by odds-on favourite Rhododendron, Sobetsu was thought to be headed back across the channel to tackle the Prix de Diane on June 18, but the rain that has hit Epsom this week has prompted a rethink.

After Sobetsu's inclusion in the field her odds were cut by several firms to 8-1, with 10-1 being the biggest price (from 14).

A daughter of Dubawi, Sobetsu put up a performance of the highest quality to beat Vue Fantastique by three lengths on her reappearance in France, when she had Coronet another length and three-quarters away in third. Coronet is also best at 10-1 for Friday's Classic.

Sobetsu, who won a maiden at Newmarket last backend before disappointing on fast ground behind Rhododendron in the Fillies' Mile, will be attempting a double last achieved by the Sheikh Mohammed-owned and Andre Fabre-trained Intrepidity in 1993.

'Bursting for a run'

Her trainer Charlie Appleby said: "After discussions with his highness Sheikh Mohammed and John Ferguson we've declared Sobetsu as we feel the recent rain has made it safe for her to run.

"The problem with waiting a fortnight for the French Oaks is it may be quick there, and we feel the ground at Epsom is the best we are likely to get for Sobetsu in that timescale. She's come out of her race in good form and is bursting for a run."

As well as Coronet, John Gosden fields Chester Oaks winner Enable, and he said of his pair: "Enable breezed on Monday morning and Coronet did so the day before. We are happy with both of them. Enable handled Chester very well and Coronet has done nothing wrong in her life.

"She came from a long way back in the Prix Saint-Alary to snatch third and has come on a lot for that race. She’s been looking to run over a mile and a half. She’s very much that type of filly and the trip will suit her very well.”

Gosden won the Oaks in 2014 with Taghrooda and believes there is great depth to this year’s renewal.

“It’s a quality Oaks with some very nice fillies,” said Gosden. "We have every respect for the favourite, and the Pretty Polly winner [Horseplay] is nice. The filly who won at Newbury the other day [Natavia] also showed a lot of class.”

The field is completed by O'Brien's Chester second Alluringly and Pocketfullofdreams, Ralph Beckett's Isabel De Urbina and US raider Daddys Lil Darling, who finished runner-up in the Kentucky Oaks and adds an intriguing extra element to the Classic.